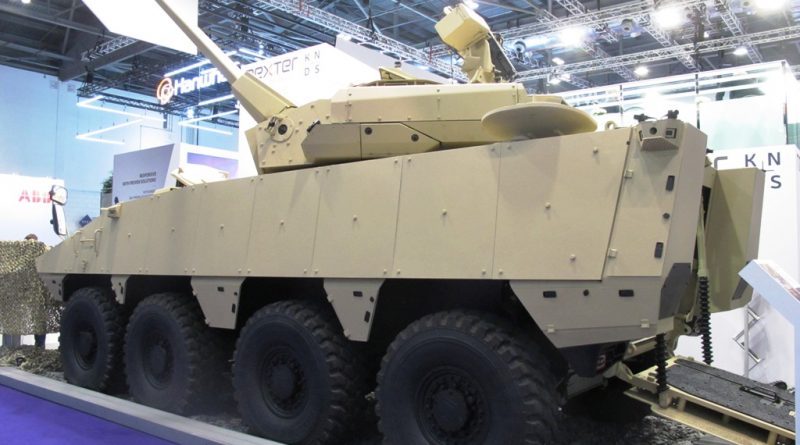 The KNDS stand was showing well the multiple choice offered to potential customers in terms of infantry fighting vehicles; while on the right side we could see the Boxer, selected by the UK for its Mechanised Infantry Vehicle programme, on the left a sand-camouflaged VBCI equipped with the T-40 turret was clearly aiming at hot climate countries.

“We consider DSEI very much an export exhibition, thus we decided to bring a VBCI in real in order to further promote it,” Paul-Etienne Legrais, Nexter’s Head of Marketing tells EDR On-Line. Beside the Qatari delegation, other Middle East and European nations have shown interest in the French 8×8 during the show. “The operation in Mali showed well the protection provided by the vehicle aluminium hull, some vehicles having been involved in IED (Improvised Explosive Device) and VB-IED (Vehicle Born-IED) accidents without any fatality,” he adds. No precise details were available in terms of number of vehicles involved and type of IED. The vehicle on show was fitted with the two-man turret armed with the CTAI 40 mm gun, a French-UK cooperation, the weapon entering service in both armies respectively on the Ajax and Jaguar reconnaissance vehicles. BAE Systems and Nexter are promoting the system, which uses cased telescoped ammunition, as the next gen medium calibre standard.

Fully in service with the French Army and now battle proven, both the military and the industry are already thinking at the vehicle Mid-Life Update (MLU) programme, the first VBCIs having been delivered over 10 years ago. “We started first discussions with the customer,” Legrais confirms, “in order to understand which are the French Army needs.” Upgrades should involve all aspects of the vehicle, firepower, mobility and protection, although nothing has yet been finalised. Once the French needs will be clearly identified, this will lead to further enhancements also in the export version of the vehicle.

In terms of future evolution Nexter has shown both on its Titus 6×6 and on the Leclerc MBT its capabilities in terms of robotisation, exploiting the company mini-UGVs as well as third parties UAVs to increase the vehicles’ reconnaissance capabilities. Such a move can easily be applied also to the VBCI. Legrais also confirmed that the integration of an active protection system is under development.

Nexter was also exhibiting a model of its Caesar, installed on the 8×8 Tatra chassis. “We had to make a choice,” Legrais explains, “due to the available space.” While the VBCI was obviously not eyeing the UK, the artillery system is being proposed to the British Army, which intends modernising its indirect fire assets. Currently the service fields three regiments equipped with AS90 155 mm self-propelled howitzers and MLRS multiple-rocket systems, three more regiments being equipped with the L118 105 mm Light Gun, Army Reserve fielding one MLRS and two L118 regiments. “According to information available the British Army is considering a wheeled system, but no decision have yet been taken,” Legrais says, awaiting the following day meeting with his British potential customer to know more.

07/09/2019 Paolo Valpolini Comments Off on ► IMC Industries to announce an advanced transceiver for communication between air platforms, naval platforms and ground stations