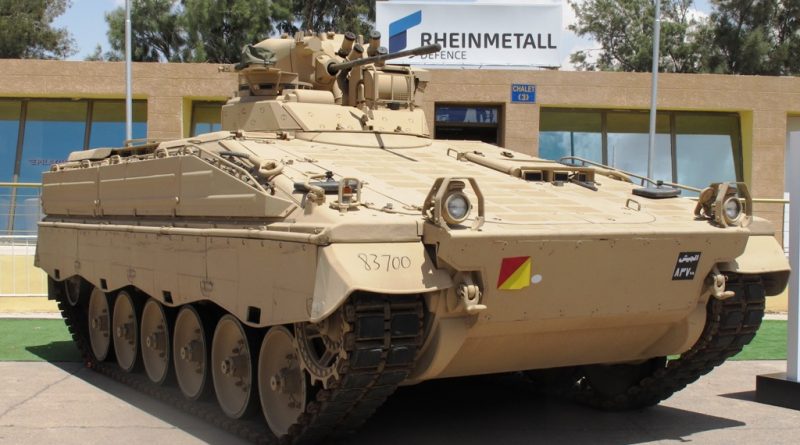 A Marder 1A3 belonging to the Jordan Army is parked in front of the Rheinmetall chalet at SOFEX 2018. The vehicle, part of the 50 infantry fighting vehicles refurbished by Rheinmetall and delivered to Jordan, has just come back from patrolling along the border, and has been upgraded with a new third generation high definition thermal camera, the Saphir, also manufactured by the German company. The new sensor was fitted for testing, which might lead to an upgrade in the fleet, should trials prove the value of the upgrade. The Marder programme stems from the close cooperation between Germany and Jordan, and Rheinmetall is confident that a third batch of Marders should be provided soon to the Hashemite Kingdom, as well as some support vehicles.

Under the push from the Bundeswehr, and with the aim of also improving Jordan Marders firepower, Rheinmetall is developing a new family of 20 x 139 mm rounds, the first type that will appear being a very low cost TP-T for training, as the German Army is running out of stocks of training ammo for more than one vehicle, such as Marders and Wiesels. A new armour piercing round as well as a new HE round should then follow, the use of new technologies allowing to considerably improve performances, although no more details were provided. As for Special Forces, the original subject of the Amman exhibition, Rheinmetall is proposing its flashbangs, widely used by military and police units, as well as its 40 mm high velocity airburst grenades