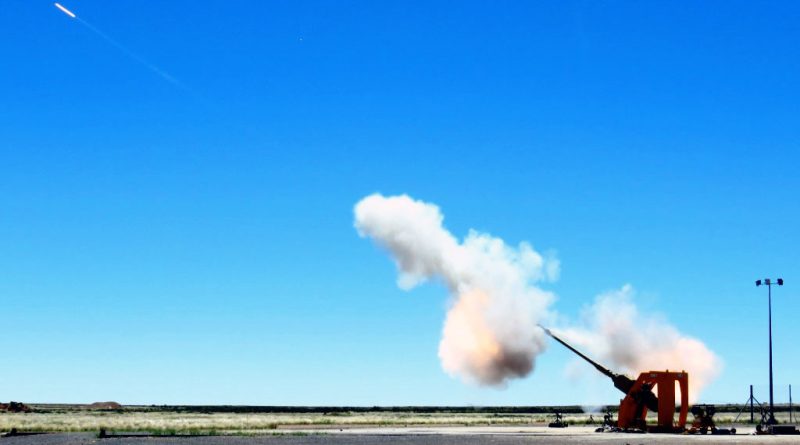 27 November 2019 – At a test fire event on 6 November at the Alkantpan Test Range in South Africa, Rheinmetall demonstrated its extensive expertise in the world of indirect fire. In the presence of international partners and customers, the Düsseldorf, Germany-based defence contractor proved how new technologies can be used to boost the performance of systems that are already in extensive use around the world – those which meet the NATO standards set out in the Joint Ballistics Memorandum of Understanding (JBMoU) as well as non-JBMoU systems. During the event, three new maximum effective range records were set using various guns. A G6 howitzer with a 52-calibre gun achieved the longest range ever attained with a conventional 155mm artillery round: 76 kilometres, while the 52-calibre gun of PzH2000 self-propelled howitzer lobbed a shell 67 kilometres. Finally, a field howitzer with a 39-calibre gun attained a range of 54 kilometres.

The following table shows the ranges achieved with various projectiles and charges.

Rheinmetall Waffe and Munition, Rheinmetall’s centre of excellence for cannon technology, showcased the self propelled howitzer PzH 2000’s main armament in action. Over the past decade, this 155mm weapons system has proven to be one of the world’s most effective conventional artillery systems, capable of attaining the high rates of fire specified in the JBMoU. Developed and manufactured by Denel Land Systems, the G6 used at the live fire event was a new version designed to attain greater ranges in line with non-JBMoU standards.

Using the celebrated Assegai V-LAP shell is an example, modular upgrades of the artillery ammunition were on show at the event. The delegations could see for themselves the marked improvement in its performance with respect both to propulsion and range when fired from 39- and 52-calibre guns. Coupled with technologies from Rheinmetall Waffe Munition and Nitrochemie, Rheinmetall Denel Munition artillery shells exceed previous maximum effective ranges when fired from any conventional 155mm artillery system currently in use.

The maximum range of over 76 km was achieved with a non-JBMoU-compliant gun. This gun served as evidence of the feasibility of a new howitzer with a range of 83 km. Working in close cooperation with the German procurement authorities, Rheinmetall plans to develop and manufacture a new 155mm gun of this type, which will feature a significantly larger chamber and a longer, 60-calibre barrel. The gun should be able to fire existing JBMoU-compliant rounds as well as new ammunition families. On the one hand, these new ammunition types will be optimized with respect to stresses occurring in the new gun, but will also be able to be fired from legacy JBMoU-compliant guns. Here, 83 kilometres serves as the benchmark, since the course correction fuse necessary for precision at these ranges reduces the attainable range by approximately ten percent. This means that the maximum effective range of 75 kilometres specified by the German procurement authorities is attainable.

Rheinmetall Norway’s 120mm Ragnarok motor system and ammunition from RDM round out the Group’s indirect fire profile. This combination lends itself especially well to multipurpose vehicle applications with a rapid-fire capability. It also enables friendly forces to quickly evade counterbattery fire. The event’s host, the German-South African joint venture Rheinmetall Denel Munition (RDM), welcomed participants from several NATO nations to the event in Northern Cape province on 6 November. As RDM managing director Jan-Patrick Helmsen explains, “Our goal is to be a true partner to the military. That’s why transparent cooperation and trust are so important to us. Tube artillery can provide defensive and offensive fire support. It’s cheaper and faster than rockets or air support, can operate around the clock, and engage targets with great precision using indirect fire anywhere within its range. Of course, range has proved to be a limiting factor in recent years, giving rise to the need for increased operational reach.” During the event, Jan-Patrick Helmsen noted that RDM has already been working to extend the range of artillery shells for some time now. “We’re known for the Assegai family and our V-LAP round, the longest-range conventional artillery projectile. The combination of South African technology and German expertise has already resulted in enhanced range, effectiveness and precision. When it comes to artillery, Rheinmetall takes a totally holistic approach”, declares Helmsen.