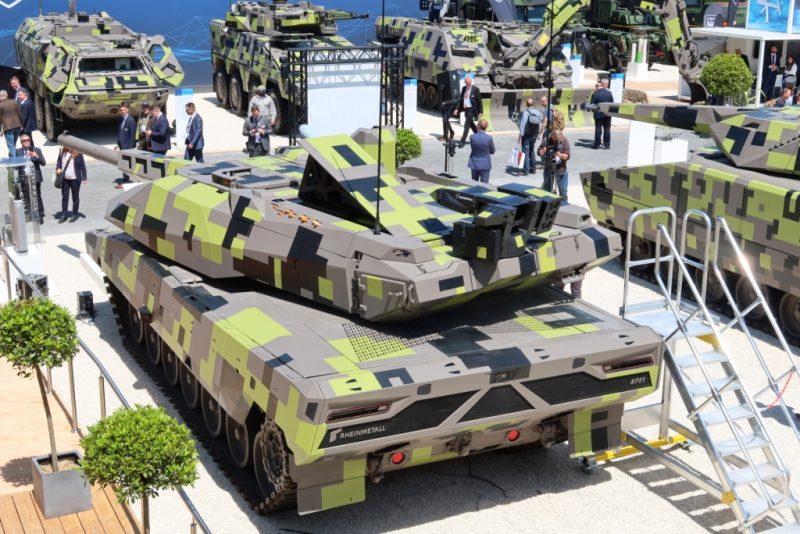 In the past years Eurosatory marked the unveiling of new armoured tracked vehicles produced by Rheinmetall. Following the KF31, a 30 tonnes class vehicle, it was the turn of the KF41, the 40 tonnes class IFV that has got a launch customer, Hungary, which programme is now well under way, and is in competition in various other countries.

After an unusual four-year interval due to the pandemic, the 2022 edition of the Paris exhibition sees the appearance of a new “KF”, the KF51, the acronym meaning KettenFahrzeug, that is tracked vehicle the number showing the mass was increased to the next level, that is the 50 tonnes class.

However the KF51 didn’t last long as at 2 o’clock of Day One it became the Panther. “It is the first main battle tank entirely developed by Rheinmetall,” Armin Papperger, Rheinmetall CEO said at the unveiling ceremony, underlining that the Panther will be “a game changer on the future battlefield.” Firepower, protection and digitisation where mentioned in this order by Rheinmetall CEO, who stressed the importance of network in distributing information from soldiers to platforms and viceversa. “We are also looking at autonomous drive for the future, he added.

The Panther is based on the Leopard 2 mobility components, but the rest of the hull and, of course, the turret, are brand new. “Our aim was to massively increase lethality, improve survivability, and add a digital backbone,” Alexander Kuhrt, Director Product Portfolio Tracked Vehicles at Rheinmetall Landsysteme, tells EDR On-Line. At the unveiling in Paris EDR On-Line learned that in perspective the Panther will be fitted with a new, and probably more powerful and less fuel-thirsty engine.

The fully new main component is the turret which is armed with the newly developed 130 mm gun, the key to the dramatic lethality improvement. “We aim at delivering on the target an energy of 18-20 MJ, Christoph Henselmann, Senior Vice President BU Weapons and Munition and Head of Product Portfolio Direct Fire explains EDR On-Line, adding that this was the level obtained in the past with the 140 mm FTMA (Future Tank Main Armament) developed by RGR Armament GmbH, a joint venture formed by then GIAT Industries of France, now Nexter, Royal Ordnance of the UK, now part of BAE Systems, and Rheinmetall Weapons & Munitions of Germany. For comparison, the latest development of subcalibre 120 mm APFSDS (Armour Piercing Fin Stabilised Discarding Sabot) rounds under development by Rheinmetall deliver a 12-13 MJ on the target. Details on the work ongoing at Rheinmetall were provided by Mr. Henselmann in spring 2021 to EDR On-Line; those interested can link up to that article by clicking HERE. In the past year some major improvements were made. “We now have the 2.0 gun, which has an even better accuracy, much higher than 120 mm guns, a key factor considering that future tanks will be required to engage at twice the distance of current ones,” Mr. Henselmann explains.

“The other main step forward is the automatic loader, which last year was just a functional demonstrator, while now is a fully working prototype,” he adds. According to data provided, the full calibre 130 mm round will have a mass of around 40 kg, the APFSDS weighing some 32 kg. Currently Rheinmetall produced some test rounds but did not pushed the development further, awaiting to see what will happen in terms of calibre choice. “We will of course exploit the technologies developed for our new 120 mm APSDS rounds in the bigger calibre, a high explosive programmable round being also obviously considered. Some customers asked for an anti-structure round, but we must consider that the automatic loader can host a limited number of rounds. Having too many types of rounds might therefore not be the optimal choice. The autoloader was developed and manufactured by Rheinmetall Air Defence in Oerlikon, Switzerland, and was delivered to Unterluess in February 2022, where it was immediately installed into the turret to check for any integration issue. It was then removed and coupled to one of the gun prototypes, to check the seamless flow of rounds. The first firing of such assembly took place on April 27. After Eurosatory the loader will be once again integrated into the turret and will be tested in military environment, to check any potential issue that needs to be solved.

“The automatic loader can host up to 20 rounds,” Alexander Kuhrt explains, adding that the system is made of three elements, the one in the middle ensuring the choice of the indexed ammunition and its loading into the breach, while the two side magazines contain 10 rounds each. To replenish them two ammunition feed are available at the rear of the turret, the whole operation requiring around five minutes. In developing the Panther, Rheinmetall looked closely at modularity, in order to allow the military to adapt the MBT to the current operational scenario; as an example, at Eurosatory one of the ammunition magazines was replaced by one with four UVision HERO 120, RWM Italia, a Rheinmetall company, having signed a cooperation agreement with the Israeli LM specialist. How much a tank formation would need such capability remains to be seen. What will certainly be feasible for the Panther will be to take over control of air and ground unmanned assets, eventually launched by some sort of mother vehicles, a “loyal wingman” concept being considered by Rheinmetall developers. The Panther has however an integral short-range air reconnaissance capability, two small UAVs with a few kilometres operational range and 30 minutes endurance being hosted on each side of the turret, and launched at will to reconnoitre the area ahead of the MBT. At Eurosatory it was possible to see one of it out of the right side of the turret. A quadcopter that can also be launched by hand, it is developed and produced by a third party under Rheinmetall requirements, Electronic Solutions providing its full integration, the aim being not to add further commands or screens in the tank as well as in the other armoured vehicles in which those UAVs are being integrated.

All this is feasible thanks to the new digital backbone that allows easy integration of add-on functionalities. The Panther features standard working stations for its crew members, made of a 23-inch main screen on top and two 10-inch screens under it, where information can be retrieved according to the role of each crew member. The Rheinmetall tank has a three plus one crew; the driver is seated at the front left of the hull, and has full situational awareness thanks to virtual view provided by outside cameras, looking front, rear and sideways. To be used for driving, the system must have a very low latency, the Rheinmetall one ensuring less than 60 milliseconds according to the company. On the right side of the hull we find the extra position, which can host a crew member responsible i.e. for handling unmanned systems, or the platoon or company commander who is coordinating the unit manoeuvre. The tank commander and gunner are located in the turret, the initial decision being to keep a manned turret. Currently the gunner position is someway different from the others, as the developed solution maintains the EMES 15 gunner sight which imposes some constraints, however should a customer not require that sight, a standard working position might be adopted.

The current turret mass is comparable to that of the Leopard 2 turret, although the gun is heavier. “We managed to keep the mass under control,” Alexander Kuhrt tells EDR On-Line, “working on protection, which now features three layers, an active protection suite, effective against antitank missiles as well as against kinetic energy threats, a reactive armour package, and finally the passive armour, and we also added roof protection, which is not based on a reactive solution.” As not being seen is the first protective measure, some undisclosed signature reduction/management systems are already incorporated by design, while other can be added.

The digital backbone respects the NGVA (NATO Generic Vehicle Architecture) standard, which makes integration easier. As an example Rheinmetall representatives explained that in two days they managed to test on the turret two different commander’s sights from two different providers. The vetronic architecture was developed since inception considering cyber protection. In perspective the Panther will receive spiral upgrades in terms of software capabilities, with the insertion of Artificial Intelligence elements, the aim being to have for the end of the decade the capability to detect, classify, and identify a target asking confirmation to the crew before shooting. HUMS (Health and Usage Monitoring Systems) elements are already embedded in the Panther, and in due time their data will be used by add-on algorithms capable to automate maintenance and logistic functions.

As said the hull protection was upgraded using the same concept adopted on the turret, the design having however to cope with some physical constraints, the Panther turret having the same slip-ring diameter of the Leopard 2. “In 2021 we did extensive trials with the 130 mm fitted to a Challenger chassis, and although the recoil is slightly higher no problems emerged for the hull,” Christoph Henselmann told us.

“We are already looking ahead, considering variants fitted with an unmanned turret,” the company CEO said at Eurosatory, adding that serial production will start in 30 months’ time, when Rheinmetall consider it possible to grab first orders. The delays in the development of the Main Ground Combat System and the emerging armoured threat on the European eastern border are highlighting the role of MBTs, notwithstanding the apparently poor performances of Russian ones in the first two months of the Ukraine war. The Rheinmetall initiative might be well accepted. The Panther, which EDR On-Line understood being under 59 tonnes, may have some good perspectives ahead, a KF52 nickname having already emerged during discussions, but this will be another story. For the time being the German company awaits to see the potential customers reactions that will be gathered during Eurosatory, to understand how much its proposal can become a real product. 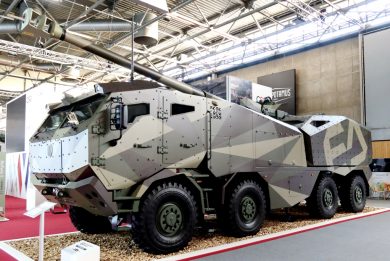 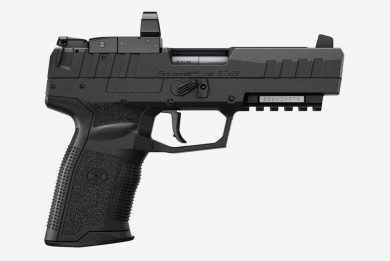