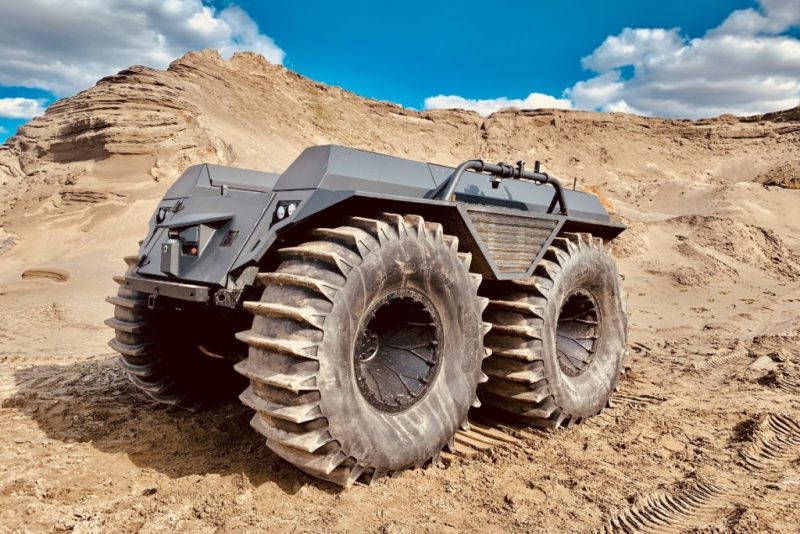 Rheinmetall Canada, the overseas arm of the German group, has been active for years in the unmanned ground vehicles (UGV) arena with its Mission Master, the hybrid 8×8 platform that from today becomes the Mission Master SP (Silent Partner) as the family gets a new member, the Mission Master XT.

The new UGV is based on a 4×4 high mobility platform able to carry a 1,000 kg payload without compromising its amphibious capability. As in the previous case, Rheinmetall selected the best suitable platform available, in this case the Fat Truck, an industrial off-road mobility vehicle developed and produced by Zeal Motor of Canada. “Our aim was to provide our customers with a solution capable to answer their requirements, complementing our Mission Master SP which electric drive gives some limitations, hence a new platform was needed,” Alain Tremblay, Vice-President Business Development and Innovation at Rheinmetall Canada said. On one hand the new platform ensures a much higher payload, the SP can carry up to 600 kg and at full load its amphibious capabilities are reduced, the other one being endurance. Fully modular, the XT is capable to host much heavier mission modules compared to the SP.

“Some of the surveillance or weaponised modules that our clients envisage to be suitable for UGVs required a higher payload, and the choice of this platform was also very important to maintain full amphibious capability at maximum payload, as we do believe that in Western Europe or in other areas around the world the ability to cross a river or to negotiate a water obstacle is a reality that military forces are facing on a regular basis,” Alain Tremblay says, maximum speed in water being 5 km/h. The XT is powered by a liquid cooled Caterpillar C2.2 turbodiesel engine providing 67 hp, the 70 litres fuel tank ensuring a 750 km range, while maximum speed is 40 km/h. Braking is done by positive deceleration through the hydrostatic transmission, which also allows to counter-rotate the wheels in order to allow a 0 turn radius, vehicle length being 3.72 meters while width is 2.55 meters. Of course, the diesel-powered XT misses the SP capacity to silently crawl in all-electric mode, when reducing acoustic signature becomes a key tactical advantage. The new platform is capable to overcome obstacles and to easily move on nearly all difficult surfaces, ranging from soft terrain to forests, its performances in terms of climbing being higher than average, 70% (35°), the same being true for side slope, 40% (22°). It is fitted with Low Ground Pressure 1640 x 640 x 610 tires, the Central Tire Inflation System (CTIS) allowing to set their pressure between 0.035 and 0.28 kg/m2 (0.5 to 4 psi), the Mission Master XT ground pressure at combat load being just higher than 0.10 kg/cm2. These tires not only provide high mobility in all conditions as well as buoyancy when afloat, but also ensure resilience on the battlefield as they allow the vehicle to carry on its mission even if one or more tires receive a direct hit by small calibre weapons, the CTIS coping with holes up to 2.5 cm of diameter. The platform weight is of 2,217 kg, adding the payload bringing the combat weight to 3,217 kg, nearly the double of the SP, which combat weight is of 1,700 kg.

The real add-on value is however the autonomy package installed by Rheinmetall, which transforms the Fat Truck into the Mission Master XT. Leveraging the work done on the SP, it took only 14 months to Rheinmetall Canada to bring the SP “big brother” to TRL 7. The core of the system is Rheinmetall PATH (Proven-Agnostic-Trusted-Highly autonomous), the Autonomous-Kit that ensures autonomous driving and navigation.

The Mission Master XT is however an optionally piloted platform, as all control elements have been retained, a driver being thus able to seat in the front section i.e. for movements inside a camp. The PATH is getting increased Artificial Intelligence add-on, and is capable to operate in numerous modes such as image recognition/classification, sensor fusion and data association, simultaneous localization and mapping, obstacle detection and avoidance, target classification and tracking, environment mapping and terrain analysis, trajectory generation and route execution, mission planning and task assignment, and hierarchical multi-operator control, although not all those functions might be selected by the customer. Obstacle avoidance is ensured by a 3D LIDAR that also provides objects tracking, the latter function being key when the UGV is used in follow-me or convoy mode. In difficult weather conditions, snow, rain, dust and fog, two radars supplement the LIDAR, which performances are severely degraded in those situations. An interesting feature is that the Mission Master XT is fitted with an automated mode that manages the CTIS, adapting the tires pressure to the type of ground and mobility situation encountered by the platform along its mission path. To increase the UGV survival capability Rheinmetall added some armour elements to provide some degree of ballistic protection to the vital elements of the vehicle.

Coming to mission systems Alain Tremblay underlines that the Mission Master XT was designed and build in accordance with a number of NATO STANAGs [1] as well as with US MIL-STD-6017 (Variable message format and Joint variable message format), this considerably reducing the integration burden of mission modules, the new UGV being fully compatible with NATO-standard battle management systems. While the XT is not able to move silently as its smaller brother, it is however equipped with a set of Li-Ion batteries that ensures a six hours endurance in silent watch mode. The first mission module developed by Rheinmetall Canada to be installed on the new Mission Master XT is the simpler one, the cargo, however in the coming weeks and months other modules will become available; according to a slide seen during the unveiling presentation, different fire support modules are proposed such as a twin-M134 Minigun RCWS, a Spike NLOS launcher, a Fieldranger rocket launcher, a loitering UAS module, or a Fieldranger Multi armed with a 40 mm automatic grenade launcher. Surveillance modules, also with Counter-UAS effectors, are being considered, as well as a tactical air surveillance module, apparently based on small AESA flat antennas radar.

Rheinmetall Canada developed a man-machine interface in the form of a smart tablet, which allows a single operator to control the platform functions as well as to monitor and operate the mission package, such as a RCWS or a surveillance system. The tablet also allows a single individual to operate multiple platforms. The XT is compatible with other systems such as the single-hand controller, smart watches and soldier systems, military equipped with the ATAK system being able to task the Mission Master XT.

The XT can be transported under slung by CH-53 and CH-47 transport helicopters and can be carried internally on C-130 class transport aircraft. The new Rheinmetall UGV is also apt to be delivered by parachute, to provide a logistic or combat support platform to airborne troops, or to be used for stand-alone missions. Rheinmetall Canada is already working on integrating SATCOM systems onto its Mission Master XT, a key capability considering its range. The XT was developed with cyber protection in mind, security and resilience being part of design requirements, while also a base level of resilience against electronic warfare has been added.

Entirely financed with company funds and wholly build in Canada, the Mission Master XT is undergoing the latest characterisation and safety tests, to be ready for production in mid-August 2021. The XT will soon start a European tour that will keep it busy until the end of the year, some initial virtual presentations having already been carried out with some potential customers, namely the UK, which has acquired a small number of Mission Master SP for its RPV Experimentation Programme. Looking ahead, according to Alain Tremblay one or two more platforms will be needed to cover all requirements, hybrid propulsion being also considered. More to come from Rheinmetall Canada. 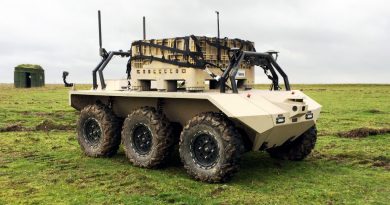 19/10/2020 Paolo Valpolini Comments Off on Rheinmetall: SeaSnake close to production