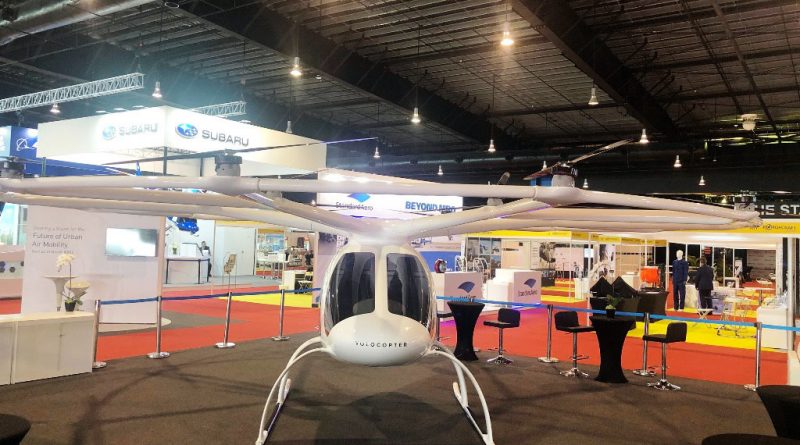 As said in the introduction, the two exhibitions taking place together in Singapore are only partly related to defence and security, the involvement of the Ministry of Transport shows it well. Innovative solutions for the future of mobility were thus visible, some of them having potential use in the defence field, although probably not in the short term.

Bases south of Frankfurt, Germany, Volocopter started working on electrically powered flying machines in the years 2000, flying a human being on an all-electric rotary wing air vehicle in 2011. This evolved in 2016, and one year later the first autonomous Air Taxi was exhibited at the Dubai Air Show in 2017.

The Volocopter x2 features a two-passenger cabin with a superstructure that carries the 18 rotors each driven by a 3-phase PM synchronous motor, brushless DC electric motorelectric motor; the structure carrying the motors and rotors is made of six hub-arms with a Y shape carrying two rotors at the Y extremities and one at the hub, the Y extremities being linked together by a rim, all being made of carbonfibre. The operating weight empty is 290 kg, which makes a 450 kg Maximum Take Off Mass (MTOM) considering the 160 kg payload. The nine Li-Ion batteries ensure a maximum flight time of 27 minutes at 50 km/h cruise speed, or 27 km at 70 km/h, maximum airspeed being 100 km/h for limited time; battery charging time is less than two hours or less than 40 minutes wuit fast charging, a quick change system allowing however to The x2 has a 3 m/s rate of climb at MTOM and 2.5 m/s rate of descent, and can reach 2,000 meters above sea level with a hovering altitude in excess of 1,650 meters. The adoption of small diameter rotors, 1,80 meters diameter, and of electric motors makes the x2 extremely quiet compared to current rotary wing aircraft, Volocopter declaring a 65 dB(A) at 75 meters distance. Fitted with a triple redundant primary flight control unit, it is piloted via an interactive one-hand control via joystick, a remote control being already under development. The German company is not the only one looking at such solutions, and technologies developed for urban flying solutions might well become of interest for the security and defence environment in due time.

07/09/2019 Olga Ruzhelnyk Comments Off on ► IMC Industries to announce an advanced transceiver for communication between air platforms, naval platforms and ground stations