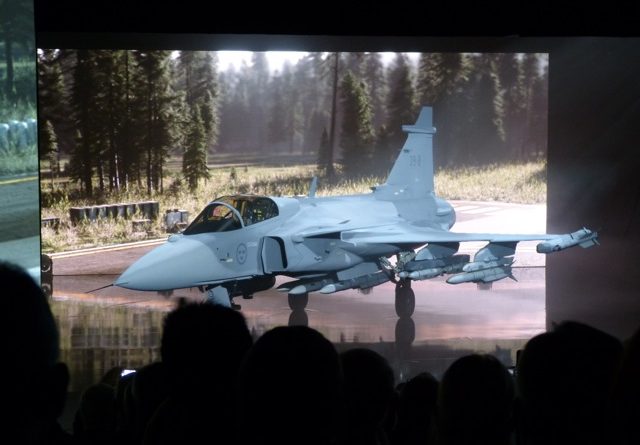 While RUAG had no aircraft on display at Farnborough 2018, Saab announced that Gripen E aircraft with designation 39-8 had conducted a number of successful flights carrying external stores, including pylons from the Swiss company RUAG Aerostructures.

Since the first flight with the Gripen E test aircraft last year, an intensive flight trials period has been successfully conducted. The aircraft has shown throughout the expansion of the envelope expected performance and behaviours, with high availability and reliability. Gripen E has now taken another big step towards customer delivery next year by flying with external stores.

“Gripen flew as expected and we are very pleased with the flight test results. During the flight, the aircraft carried out a number of actions to verify the flying and handling qualities of the aircraft with this extended configuration”, says Jonas Hjelm, Senior Vice President and head of Saab business area Aeronautics.

Gripen E’s pylons are installations by which additional tanks for fuel, surveillance systems or guided weapons can be attached under the aircraft. Each aircraft is fitted with a total of eight pylons. These technologically sophisticated components include both electronic as well as mechanical systems and must meet the highest demands regarding aerodynamics and load capacity. The individual parts of the pylon are produced using many different kinds of production procedure. The centrepiece consists of high precision milled parts of various materials. Semi-finished parts such as cast and forged components are used for this purpose. Sheathing is also produced using stretch forming processes. Welded assemblies and composite fibre components are also processed. In addition a large proportion of the components undergo the surface treatment and crack testing required for aviation.

The first flights with external stores were conducted over the Baltic Sea at the beginning of July. Besides two of the Diehl BGT Defence infra-red imaging system – tail/thrust vector controlled (IRIS-T) air-to-air missiles, the aircraft carried five pylons designed and built by RUAG Aerostructures.

“I am glad to follow the continued success of the Gripen E programme. RUAG Aerostructures is proud of the broad and long-term partnership with Saab”, said Dirk Prehn, CEO of RUAG Aerostructures and emphasising the importance of the business relationship between RUAG and SAAB. “As a major supplier in the Gripen programme, responsible for the design and manufacture of the pylons and other components, we contribute to the superior performance of the fighter, meeting all requirements in terms of safety, performance, life cycle cost and quality”.