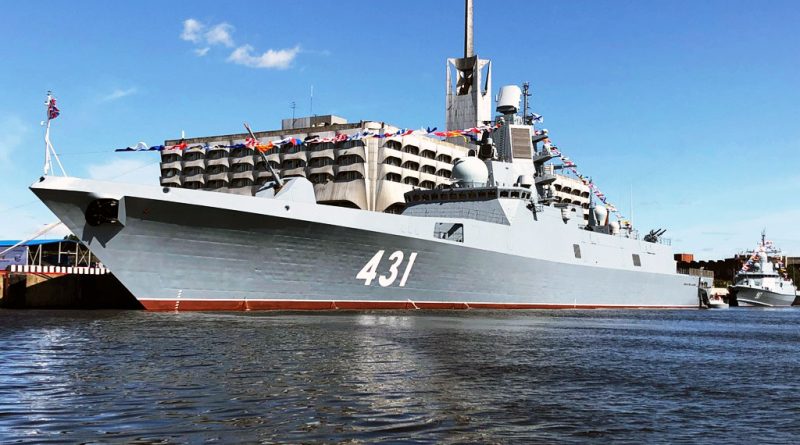 “Russia pays great attention in strengthening its Navy. The percentage of the Service’s modern hardware has exceeded 62%,” the President of the Russian Federation Vladimir Putin said during the Naval Day parade held on 28 July in Saint Petersburg., adding that the tasks being accomplished by the Russian Navy (Voyenno-Morskoy Flot, VMF) require modern knowledge and advanced professional skills.

According to Putin, the Service is now upgrading its inventory of naval ships, logistics vessels, and infrastructure at quick rates. “The VMF will be reinforced with 15 naval ships and boats before the end of the year. [We] upgrade its Naval Aviation [Morskaya Aviatsiya, MA] and Coastal Troops [Beregoviye Voyska, BV] and modernize infrastructures at the [VMF’s] naval bases. [We] have also restored the practice of around-the-world cruises,” added Putin.

The formation of the Russian naval ships was headed by a full-scale mock-up of the three-mast wooden battleship Poltava armed with 54 cannons.

This year the Naval Day parade was preceded by the 9th International Maritime Defence Show (IMDS 2019), which was held in Saint Petersburg July 9 to14. The exhibition was focused on coastal defence and support systems rather than on naval ships.

The newest Rubezh-ME mobile coastal defence missile system (MCDMS) developed by NPO Taifun (a subsidiary of Concern Morinformsystema-Agat) was the most innovative weapon showcased at the IMDS 2019. In fact, the Rubezh-ME is a less expensive and more compact variant of the well-known Bal (SSC-6 Sennight) MCDMS that is adopted by the Russian military and supplied to the VMF’s coastal units. The Rubezh-ME employs four ready-to-use Kh-35UE (AS-20 Kayak) anti-ship missiles with a range of up to 260 km. The MCDMS incorporates up to eight combat vehicles, a mobile command and control post, and an optional self-propelled radar. According to the Tactical Missile Corporation (KTRV), the tests of the land-based variant of the Kh-35UE will be finished before year end.

The KTRV unveiled a counter-mine unmanned underwater vehicle (UUV) fitted with the Alexandrite-ISPUM-E counter-mine system, which is also adopted on Russian Navy’s Project 12700 MCM vessels. The UUV allows deactivation or destruction of sea mines at a depth of up to 300 meters.

Rostec’s Concern Tecmash unveiled its new Zagon-2E anti-submarine guided bomb. The munition weighs 120 kg and is fitted with a cumulative high-explosive fragmentation warhead and an active sonar-based guidance system. The bomb engages underwater combatants at a depth of up to 600 meters and can be carried by Il-38N and Tu-142M MPAs and Ka-28 anti-submarine helicopters.

At the IMDS 2019, NPO Taifun also announced the delivery of the 100th combat vehicle of the Bal MCDMS system to the VMF. 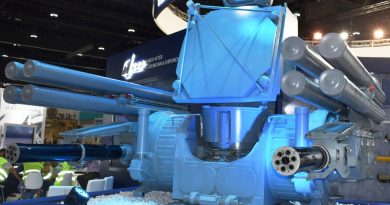