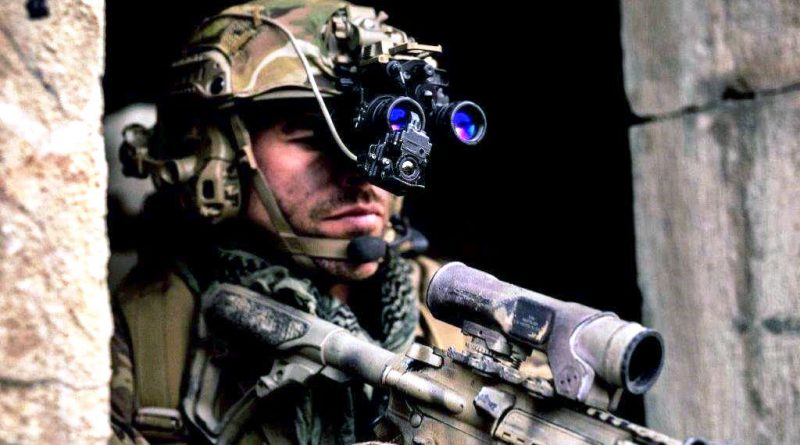 A specialist in night vision sights, binoculars and target acquisition systems, Safran Electronics & Defense unveiled its latest night vision device, which allows the company to cover all four soldier-related night visions segments, weapon sights, binoculars, targeting systems and, finally head-mounted systems, and more specifically Night Vision Goggles (NVGs), the latter being covered by the new E-Nyx. One of the reasons is definitely the BI-NYX bid which was launched by the French DGA in March 2018 and which should lead to the acquisition of some 10,000 NVGs in an eight-year timeframe, while two orders for the new product have already been bagged from two undisclosed NATO countries, which units will be part of Task Force Takuba [1] . However adding a state-of-the-art NVG to its portfolio will also allow Safran to complete its offer for soldier systems, making it able to provide a one-stop-shop solution, with the exception of communications.

To do so Safran established a partnership with one of the key players in the NVG field, Theon Sensors SA of Greece, which Nyx range of systems named out of the Greek goddess of the night is in use worldwide, the Greek company teamed with Harris having recently won a lucrative contract for the US Marine Corps while the Nyx has won also a contract in Switzerland through Safran, which also includes thermal binoculars and target acquisition systems.

Considering the huge potential market within NATO countries the French-Greek team decided to develop a new NVG, based on lessons learned coming from Nyx customers who used the Theon NVG in operation, and is now ready to unveil a new system known as E-Nyx, “E” standing for “Enhanced”. According to Safran the E-Nyx comes as a quantum jump in the NVG field both in terms of performances and SWAP-C.

Increasing the Field of View (FoV) and decreasing where the two key issues, the aim being finding the optimal compromise between weight and performances. In the end the FoV that answered those requirements was 47°; compared to the 40° FoV of the previous Nyx this allows an increase of over 40% of the surface seen by the operator, the lens being smaller and lighter, the reduced range being compensated by the improvements made in the Image Intensification (II) tubes, which brings to an even better detection and recognition performances. In terms of weight reduction the E-Nyx allows a 25% saving, with its 495 grams with battery compared to the 600 grams of the current Nyx, its dimensions being 115 x 110 x 75 mm.

The E-Nyx is fitted with Photonis 18 mm 4G tubes, which together with the improved lenses provide a 1.4 cy/mrad resolution, higher than the 1.1-12 cy/mrad of previous generation products, allowing to maintain a good visibility even in Level 5 nights. According to data provided by Safran a human target can be detected at 300 meters while the recognition range is 150 meters, those data becoming respectively 900 and 450 meters for vehicle-size target. The E-Nyx can be fitted with autogated tubes and green or white phosphorous solutions are available. It can also adopt Photonis 4G+ tubes that should further improve its performances. This choice allows to obtain a non-ITAR system, which can thus being exported within European export limitations, however the E-Nyx can also be fitted with US-made tubes for that or other markets, according to customers requirements.

As option the E-Nyx can be fitted with an RFID (Radio Frequency Identification) chip that simplifies logistic issues, i.e. recording the hours of operation, the number of switch-on/switch-off, the software version, all data that can be downloaded at distance on a computer allowing i.e. preventive maintenance operations.

The new Safran NVG was designed together with operators, thus ergonomy has been a key issue in the design phase, issues such as operations with gloves having been thoroughly tested, bringing to the market a fully tested product, according to Safran.

The E-Nyx is powered by a single AA battery providing over 25 hours autonomy when a Lithium-Ion battery is used or over 15 hours when an Alkaline battery is fitted. However Safran offers as option a configurable battery pack, with more than one battery, that can be fitted at the rear of the helmet in order to reduce the NVG weight and partly compensate it; that said, the company does not foresee a version of the E-Nyx specifically designed to be powered by a remote battery pack.

The latter can however power not only the NVG but also the clip-on systems proposed by Safran, which are part of the company portfolio since a few years. Two solutions are available, one with an uncooled thermal imager operating in the Long Wave IR band (8-12 µm) and one operating in the Short Wave IR band (0.9-1.7 µm), the E-Nyx being natively compatible with those systems as it is part of the same ecosystem developed by Safran. The former is known as E-.COTI, for Enhanced Clip-On Thermal Imager, fusing a thermal layer with the intensification one, allowing vision when no residual light is left as well as de-camouflaging, the latter being the E-COSI, for Enhanced Clip-On SWIR Imager, which allows to see target pointing and marking/identification when using Near-Infrared laser aiming and illumination devices. With mounting bracket and battery both systems weigh 125 grams, however a version without battery is provided which weighs 30 grams less, power being given by the aforementioned configurable battery pack. Besides increasing the vision capability at night, the E-COTI and E-COSI being both based on digital technology they add  situational awareness elements, injecting in the vision data such as position, navigation, waypoints, as well as Blue Force Tracking. Both systems are in service with numerous Special Forces units, which interfaced them with the ATAK (Android Team Awareness Kit) Battle Management System, used by US and NATO Special Forces.

Back to the E-Nyx, over 14,000 systems have    already been ordered by the US Marine Corps while 12,000 more are on order by European armed forces. The version proposed to France is known as W-Nyx, as it differs for minor details, i.e. colour, from the standard system, in order to fulfil the French DGA requirements. The E-Nyx is assembled at the Safran facility in Saint-Benoît dans la Vienne, close to Poitiers, the French company being also responsible for marketing; prototypes were available in spring 2020, and are currently under evaluation in numerous units, the company aiming at delivering the first batches in late 2020-early 2021. Designed for infantrymen, the E-Nyx is considered as a family, versions dedicated to drivers, pilots, and other uses being definitely among those considered by Safran and Theon.

[1] Task Force Takuba is a European force that will be deployed in Mali and is politically supported by Belgium, the Czech Republic, Denmark, Estonia, France, Germany, Mali, Niger, the Netherlands, Norway, Portugal, Sweden and the United Kingdom. The Task Force is aimed at tackling terrorist groups in the Liptako region, and will be operate under the command of the French-led operation Barkhane. TF Takuba should reach its IOC in summer 2020 and its FOC in early 2021, more nations having declared their intention to join that force. 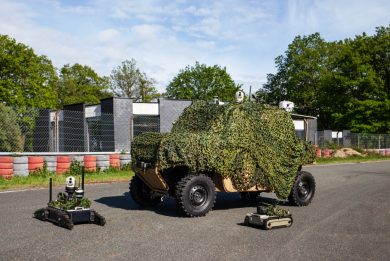