On the eve of the opening of the fifth biannual Singapore Air Show at the Changi Exhibition Centre, Leck Chet Lam, the managing director of the show’s organizer Experia Events, said that it had cemented its position as Asia’s largest aerospace and defence show.

Attracting more than 1,000 companies from over 50 countries including 65 of the top global aerospace companies, the show featured an Emerging Technologies Zone showcasing aerospace manufacturing and IT, focusing on some of the key trends in aviation such as augmented reality and unmanned airborne vehicles (UAVs) and a Training and Simulation Zone showcasing education, training and simulation technologies.

Of the 20 country pavilions, the largest belonged to the United States with more than 140 exhibitors, while the Philippines also made event history by participating as a country pavilion for the first time.

This year’s Feature Country was France whose ambassador to Singapore, Benjamin Dubertret, said was an excellent opportunity to forge an even closer partnership with Singapore. He said that nearly 60 companies participated, the largest French presence ever at an airshow outside of France, which include prime contractors, equipment manufacturers, small to medium enterprises, and maintenance specialists.

Among them was Dassault which, in addition to having a French Air Force Rafale taking a star part in the daily flying display programme, it was promoting a maritime surveillance of its Falcon 2000LX twinjet business jet. At the end of last year, a Falcon 2000LX was delivered to the Beijing Red Cross emergency medical centre for service as a medevac platform, however, with China’s building military bases on disputed island’s in the South China Sea, several Asian countries are looking to increase their maritime surveillance capabilities.

The Japanese Coast Guard has selected a maritime patrol version of the Falcon 2000 and Dassault is confident that the aircraft is ideally suited for the role.

With a history of producing military maritime variants of it business jets including the Falcon 20/HU-25A Guardian for the US Coast Guard, and the Falcon 50 for the French Navy, Dassault outlined to EDR the key features of a Falcon 2000 MPA. It operating coasts are a major factor as are speed, range and endurance. With a maximum range of 7,500 km (4,600 miles) and a dash speed of 685 km/h (425 mph), the Falcon can be fitted with four underwing hardpoints to carry up to 2,500 kg (5,500 lb) payload. Equipped with a 360 degree underbelly radar, the Falcon 2000 MPA could also carry out ELINT and SIGINT missions.

While admitting the oil and gas support market is currently flat, Airbus Helicopters Philippe Monteux told EDR that the company had a long and successful relationship with the region with 68 percent of the civil market, and had been in Singapore since 1977. It had increased the scope of its automated spares and support website which currently offers 95 percent availability. At the same time a new site of the French helicopter engine manufacturer Turbomeca has been built in the Seletar Aerospace Park in Singapore. The Civil Aviation Authority of Singapore (CAAS) also signed a Memorandum of Understanding (MOU with Airbus Helicopters to conduct Unmanned Aircraft Systems (UAS) Proof-of-Concept Trials, named the Skyways Project, in Singapore.

Monteux said that the military market is proving healthier for Airbus Helicopters with contracts for the H145M for the Thai Army and Navy and requirement from the Indonesian and Philippines navies about to be issued. Brunei, Malaysia and Vietnam are also on Airbus Helicopters target list.

Airbus Defence and Space displayed it’s a Malaysian Air Force A400M and an Indonesian Navy CN235 in the static park and announced the delivery of the third and final Airbus C295 medium transport aircraft to the Philippines Air Force. The company is confident of future sales of all three types in the region.

MBDA was showcasing its comprehensive product range designed to meet the land, naval and airborne-guided weapon system requirements of each of the armed forces. MBDA has commenced deliveries of its Advanced Short Range Air-to-Air Missiles (ASRAAM) for the forthcoming integration of this infra-red air dominance missile onto the UK’s F-35B and is promoting the missile for confirmed F-35 customers in the Asia Pacific region including Australia, Japan, and possible customers, Singapore and Indonesia. MBDA’s Meteor active radar guided beyond-visual-range air-to-air missile (BVRAAM) is about to be cleared for service on Swedish Air Force Gripen C/D aircraft, Meteor will be offered to Thailand for its Gripen fleet.

Thales range of products at Singapore included optronic equipment and systems, with thousands of products in service in more than 60 countries. Working closely with its partners and end-users, Thales draws on a range of advanced optronics technologies to develop imaging and image processing solutions, tailored to the precise requirements of each customer.

Thales claims to be the only European company able to deliver a fully integrated air defence capability, from radars and C2 centres through to effectors and their respective fire control systems. Thales’s Advanced Air Defence offering is an integrated set of solutions designed to ensure timely decision-making and effective responses for the protection of military forces, key assets, nations and citizens around the globe.

DCI, the French Ministry of Defence operator for the transfer of French armed forces know-how, announced that the Singapore MINDEF will be extending its contract to provide RSAF flight training and a Ground Training Centre at Cazeaux in France on its fleet of 12 M346 Master advanced trainer/LIFT aircraft.

Apart from the French participation, a major participant at the show was Singapore Technologies (ST) which featured a range of future innovative products from soldier equipment to combat platforms and unmanned ground vehicles. Its smart battlefield solutions combine industry-leading innovations with advanced technologies to address its customers’ requirements for operational simplicity and combat effectiveness in operations. The radar completed its first test flight of a six-month flight trials campaign on 4 February.

In its Defence Engineering and Aviation Services Cluster, ST Engineering showcased its MRO as well as upgrade and modernization capabilities for the C-130 aircraft and in-house designed Unmanned Aerial Vehicles (UAV) for both military and commercial use. These included a proof of concept of an Unmanned Hybrid Vehicle (UHV) that provides users an alternative for swift deployment of a UAV to the Area Of Interest for underwater missions. The identified mission profile of the UHV will consist of two phases, a short flight from a host or mother-ship and an underwater mission phase.

Trade attendance from 16 – 19 February saw a 7 percent increase compared to 2014 with 30 percent from overseas. This year’s Airshow also saw close to a 5 percent increase in VIP delegations.

“We are pleased that the fifth edition of the Singapore Airshow has received such strong support from both trade and public visitors alike. We are constantly looking for ways to innovate and improve the creation of programmes and activities to provide a meaningful experience for all participants,” said Leck Chet Lam, Managing Director of Experia Events, organisers of Singapore Airshow. “We would like to thank our stakeholders, exhibitors, partners and visitors for their continued participation and support, and look forward to building on this year’s show to make Singapore Airshow 2018 even more exciting.”

Singapore Airshow 2018 will be held from 6 to 11 February at Changi Exhibition Centre. 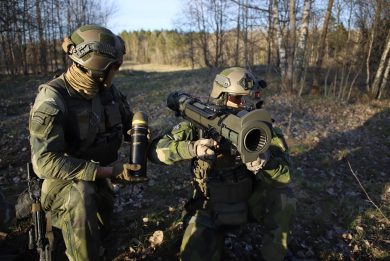 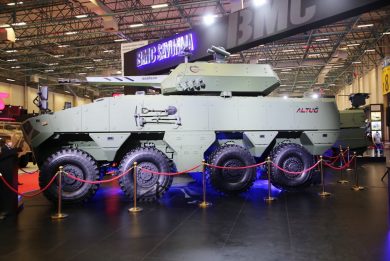