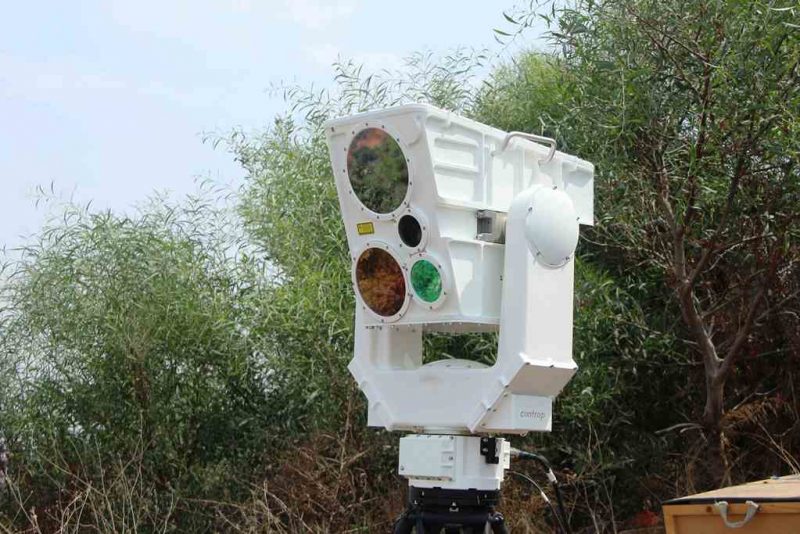 A prime player in the optronics field, Controp of Israel unveiled the latest member of its land family Smart Systems, the Speed-LR, the two last letters obviously standing for Long Range. The company land surveillance portfolio is split between scanning land systems, with its Tornado-ER/400, and multi-mission systems of the Speed series, which until now were available in two models, the medium-range Speed-MR, now re-branded MEOS, and the Extended long-Range Speed-ER.

These systems find their application in security missions, such as land border or coastline surveillance, as well as in force protection duties, i.e. to ensure surveillance around main or forward operating bases.

“These multi mission land systems provide persistent surveillance, they have the ability to build a panoramic view even on 360°, can automatically detect targets, marking each of them with an ID and follow them over a line of time,” Guy Oren, Controp’s V.P Marketing and Sales tells EDR On-Line. The Speed products are multispectral, adding SWIR (Short Wave InfraRed) over the MWIR (Medium Wave IR) and the daylight channel; the advantage of the SWIR sensor, which works in the 0.9-1.7 μm band, is that it mainly uses reflected IR, thus generating an image very similar to that provided by sensors operating in the visible band, allowing positive identification (PID), often required by rules of engagement before taking action against the target. Moreover it also allows seeing behind glass, another important feature when dealing with vehicles, and performs well through obscurants such as mist humidity, fog, dust, or smoke. The SWIR sensor needs however a minimum light to operate, while on the other hand the MWIR sensor, operating in the 3.6-4.15 μm, detects IR radiation directly emitted by the target and can thus operate also in absence of any light source.

Complementarity is obvious, as well as the advantage of the multispectral solution versus MWIR-only systems, the two-band option ensuring a true 24/7 capability according to Controp. “Our systems are scalable by ranges,” Guy Oren explains, “and most of our lenses are zoom lenses.” Speed systems can also operate in a scanning mode allowing the creation of the real-time targets database, which is then investigated switching into the observation mode. The system is able to classify targets thanks to Artificial Intelligence algorithms, reducing the operator’s workload. The Speed-LR can be coupled to the company true scanning device proposed by Controp, the Tornado-ER/400, which updates the 360° picture every 3 seconds, the coupled systems allowing observe-while-scan operations. As said, Speed systems are mostly devoted to observation and investigation, therefore they have a lower angular speed, roughly half that of the Tornado, however they maintain an inherent target acquisition capability through scanning, the two modes being carried out alternatively. Of course the 360° scanning is the worst case; the surveillance sector is often smaller, therefore the refreshing time becomes higher.

One of the reasons for introducing a new member of the Speed family was to provide customers with a wider choice in terms of price; “We all knew that the price of the Speed-ER, which we launched some years ago, was much higher than the market benchmark, and with our new Speed-LR we want to hit the market with a system that is in line with the benchmark price but provides very attractive performances,” Oren says, pointing out that systems of comparable price lack the SWIR channel and other features. According to the Controp representative the Speed-LR provides range performances that are around 70% of those obtained with the Speed-ER, but its cost is around 50% of the extended long-range model, EDR On-Line understood.

One key element when considering long range detection is stabilisation; “Digital stabilisation is good,” Controp’s V.P Marketing and Sales explains, “But when a system is installed over a high tower and has to cope with strong winds, or when it is used in Force Protection applications, on a hill, and we want to look really far away, digital stabilisation will not suffice.” According to Guy Oren gyro-stabilisation is really what makes the difference between Controp’s fixed systems for land applications and others, as in the lenses and sensors domain the major optronic players are using same or comparable elements. To cope with long range observation with Fields of View (FoV) close to 1°, Controp added a 4-axis stabilisation based on gyroscopes on top of the digital one, this allowing to fully compensate the unwanted movements. This high stabilisation level also allows the system to easily build up the 360° panoramic view as the frames match to each other.

Coming to technical data, the full-digital optronic payload has a weight of 35 kg while the gyro-stabilised gimbal weighs 30 kg. The gimbal provides ± 45° elevation arc and continuous azimuth swing, angular velocity being up to 1 rad/s and angular acceleration up to 1 rad/s2. Nominal power consumption is 250 W, the system power supply being either 220 VAC or 48 VDC. It is to note that mechanical and electrical interfaces are the same of the Speed-MR, therefore should a customer decide to improve its surveillance system, the long-range system can easily replace a medium-range one.

The daylight channel is based on a high resolution colour CMOS with a 1920×1280 pixels focal plane array (FPA), and is fitted with a x30 zoom lens providing a wide FoV of 60°x36° and a narrow FOV of 2°x1.1°. The MWIR thermal channel employs a latest generation 1280×1024 XBn staring array with a 10 µm pitch, the corresponding x25zoom lens having a 24-590 mm focal length and provides a narrow FOV of 1.25 and a wide FoV of 31°. The SWIR channel is used for spotter duties, once the target has been acquired, and is the channel with the longest focal length, the x4.75 zoon having a maximum focal length of 1,900 mm, with a correspondent narrow FoV of 0.28°, wide FoV being 1.3°. The sensor is a 640×512 pixel Indium Gallium Arsenide (InGAs) Staring Array, however Controp proposes a High Definition detector as option. According to information provided by Controp, the MWIR detection range is 33 km while that of the SWIR channel is 40 km, probably against a vehicle-size target, these figures being obtained in ideal conditions, as many meteorological factors can influence those performances. No data were made available for the day channel. As option a Class 1 eyesafe Laser Range Finder can be installed, with a range up to 20 km.

Controp just started marketing its new Speed-LR, the company being confident that the plus it provides with the SWIR channel, such as the capability to operate in coastal surveillance or on fixed towers located close to maritime areas even in foggy conditions thanks to its SWIR sensor, will make it a successful item, “Following in the path of the successes obtained by the Speed-MR and the Speed-ER,” Guy Oren concludes. 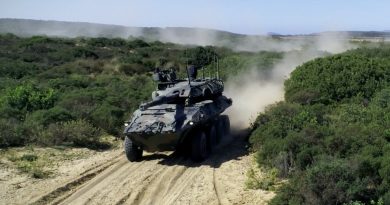 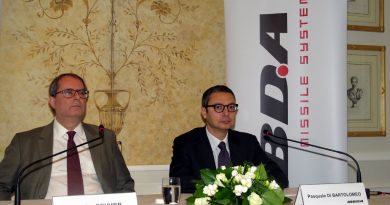 MBDA Italy looks at the future 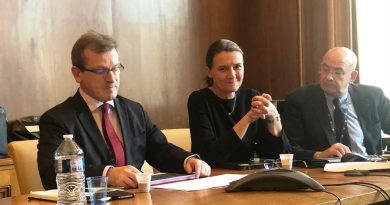