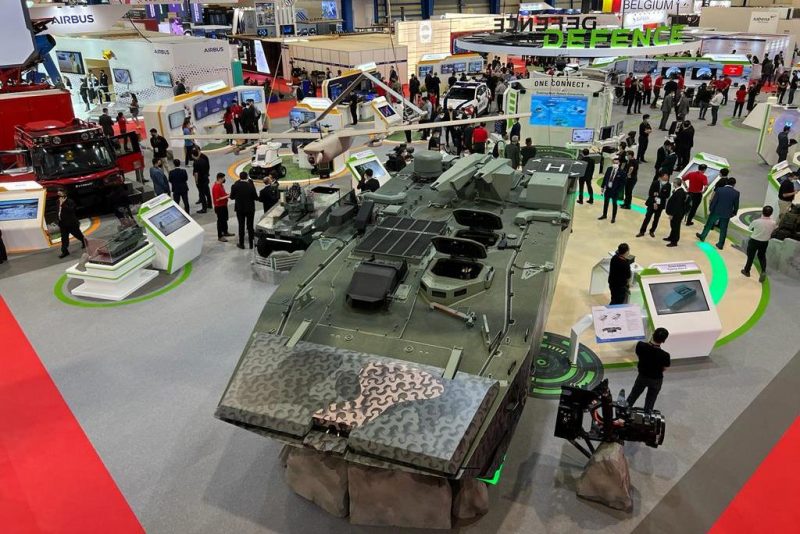 With over 430 vehicles in service with the Singaporean Armed Forces the 8×8 developed and produced by ST Engineering is close to get a rejuvenation care that will involve the automotive as well as the vetronic architecture as well as its role and concept of operation.

At the 2022 edition of the Singapore Airshow, the national defence giant exhibited a mock-up of its 8×8 armoured vehicle which has lost its “fighting” attribute in the strict sense, becoming a mothership vehicle, which exploits unmanned ground and air vehicles to gather information, carry out surveillance missions, and eventually engage the opponent.

First of all ST Engineering is looking at a hybrid propulsion version of its 8×8 IFV, that will adopt a serial hybrid configuration, in which the internal combustion engine will generate electric power to reload the on-board battery pack and to power the electric machine that, in turn, will give motion to the wheels. According to information provided at the show, the overall power will be in excess of 1,000 hp (the 25 tonnes Terrex 1 was fitted with a Caterpillar C9 providing 450 hp, the following version, the Terrex 2, with a 30 tonnes combat weight being fitted with a C12 providing 700 hp). Two options are being examined; in the axle drive solution electric motors power the axles, while in the in-hub configuration each wheel has a built-in electric motor. This latter solution allows a much greater flexibility, as no mechanical link is needed, electric cables ensuring power distribution and electronic control of each wheel, their intrinsic flexibility freeing the designer from the constraints given by mechanical links. This also allows the adoption of more effective solutions in terms of protection, especially when adopting the in-hub configuration.

A key element in both configurations is the battery pack, which is key in providing the highest possible energy storage capacity. According to information gathered at Singapore Airshow, ST Engineering is working with two battery specialists, ELEO Technologies of the Netherlands, and Durapower Technology (Singapore), which mother company is the NL-based Durapower Group. Both companies are active in the electric/hybrid automotive world, and add their skills to those of ST Engineering to optimise the solutions for the Terrex.

The automotive advantages of a hybrid vehicle are well known; increased fuel efficiency that brings a higher operational range, which is increased by 20% up to 600 km compared to the existing Terrex, higher speed, here too a 10% increase up to 110 km/h while maintaining the same 30 tonnes GVW, higher acceleration as electric motors always work at maximum torque. As for operations, the hybrid vehicle can run all-electric for a limited period of time, ensuring maximum stealthness, while the great amount of stored on-board energy allows the vehicle to operate with the engine cut off for long periods of times, maintaining its sensors and on-board systems fully active.

This brings us to shift to the systems installed on board of the vehicle exhibited at the Singapore Airshow, which was descriptive of the mothership vehicle concept but was still featuring a conventional propulsion system.

The driver’s full-digital cockpit is fitted with a see-through armour system that allows him to enjoy a nearly 180° field of view while remaining fully protected by the armour. The same capacity is provided on a 360° FoV to the commander and gunner, while a 360° close-range camera viewing system provides full situational awareness to the dismounts, the Terrex 8×8 in the combat configuration carries a crew of two plus 12 infantrymen at the rear.

According to ST Engineering representatives, the company has already developed a hybrid-powered prototype, which has not yet started trials. It is unclear which type of hybrid solution was adopted on that vehicle.

In the mothership configuration the rear compartment is fitted with operators’ consoles that allow controlling ground and air unmanned vehicles. ST Engineering is experimenting its Manned-UnManned Teaming (MUM-T) solutions, and exhibited the mock-up of its mothership vehicle with two UGVs, both developed by the company itself. The first was a wheeled one, the Jaeger 8 8×8, and was fitted with an Adder RCWS armed with a 12.7 mm machine gun. The second one was a small tracked UGV, the Aegis, and was fitted with an Adder Micro armed with two Ultimax 5.56 mm machine guns, all by ST Engineering.

While both land unmanned systems were able not only to gather information but also to engage the enemy, a third ISTAR element was visible, in the form of a Veloce 15 fixed-wing UAS developed by ST Engineering; a 17 kg MTOW airframe , electric powered, with a 2-3 hours endurance, capable of vertical take-off and landing thanks to four rotors, and to fly horizontally at a speed of up to 40 knots thanks to a pushing propeller activated by rear mounted internal combustion engine, that allows an endurance of 2 to 3 hours. These unmanned vehicles could be controlled from inside the Terrex, where the room usually destined to infantrymen was hosting the ground control stations used to control ground and air remote systems. Reconnaissance and target acquisition missions, as well as some kinetic missions could be performed without risking the soldier’s life, the vehicle being a node of the network, all information gathered being shared with the community. It will be interesting to follow the evolution both of the mobility solution and of the MUM-T concept while the company will start to interact with the military, in that iterative process that is now quite common when developing new concepts. 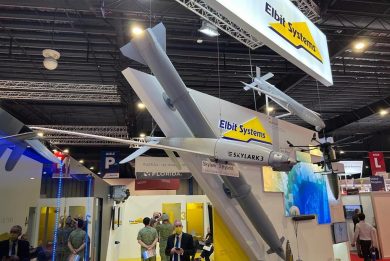 15/02/2022 EDR On-Line editorial staff Comments Off on Elbit Systems, the Skylark 3 goes Hybrid and more than trebles its endurance