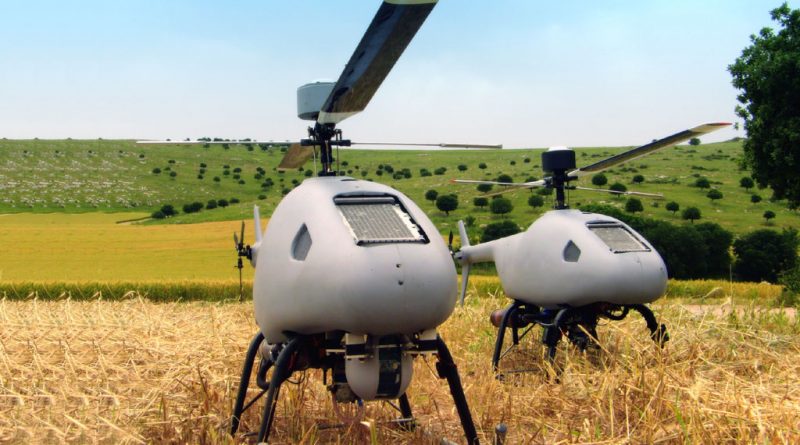 Unmanned air vehicles and Israel have a long story in common, however these were mostly fixed wing airframes. In 2005 Steadicopter was established, the company concentrating on automatic helicopter flight control and model helicopters. After 13 years development the Israeli company unveiled its Black Eagle 50 rotary UAV at Eurosatory, the system having further evolved following an intense year of evaluation by the Israeli Ministry of Defence. “The requirements are changing, thus we add new features,” Noam Lidor, Sales and Marketing Manager tells EDR On-Line, explaining that the aircraft on exhibition is not the latest version. Steadicopter does most of the components in house, mechanics, electric, navigation, ground control station software and hardware, all being designed and produced in Migdal ha Emek, 25 km south-west of Haifa, where the company is located.

The Black Eagle 50 in its latest iteration is 2.54 meters long, has a maximum take-off weight of 35 kg, 5 kg of which are payload, and an endurance of 4 hours (3 hours in hovering) while its data link range is of over 150 km. I can reach a maximum speed of 70 knots and has a cruising speed of 45 knots, service ceiling being 10,000 ft. It can operate up to +45°C, take Its two-blade, 2.16 meters diameter, teetering rotor is driven by a 2-stroke 2-cylinder engine of Czech origin, the MVVS 116, the number indicating the displacement in cubic centimetres, which provides 11 hp, the engine weight being only 3.1 kg. “In order to cope with the high temperatures we usually find in Israel we took the engine and modified it, shifting from an air-cooling system to a liquid-cooling one,” Noam Lirod explains.

One of the key design parameters was to keep the logistic footprint as limited as possible, “in this our Black Eagle 50 is similar to a small UAV,” the company sales manager says. Training is pretty simple, a 3-weeks course is provided to operators and technicians, allowing to deal with all levels of maintenance.

Another distinguishing feature is that it has been designed to be capable of flying even in GPS denied areas with maximum accuracy, this being a key requirement from the IDF. “Last year we developed a very sophisticated algorithm allowing us to fly with utmost accuracy based on the inertial navigation system,” Noam Lidor says. The Black Eagle 50 is fitted with a series of automatic features, as it can take off, hover, fly and land fully autonomously; moreover once the target is identified the aircraft is capable of flying fully autonomously around it.

Although Steadicopter didn’t have any firm contract yet, its management considers that the first signature is pretty close, the system being ready for production. Not only, the company signed an agreement with Israel Shipyards, part of the SK Group, the latter ensuring the marketing of the Black Eagle 50 in conjunction with its offshore patrol vessels, more specifically with the 500 tonnes OPV 62 that features a flight deck capable of hosting small helicopters.