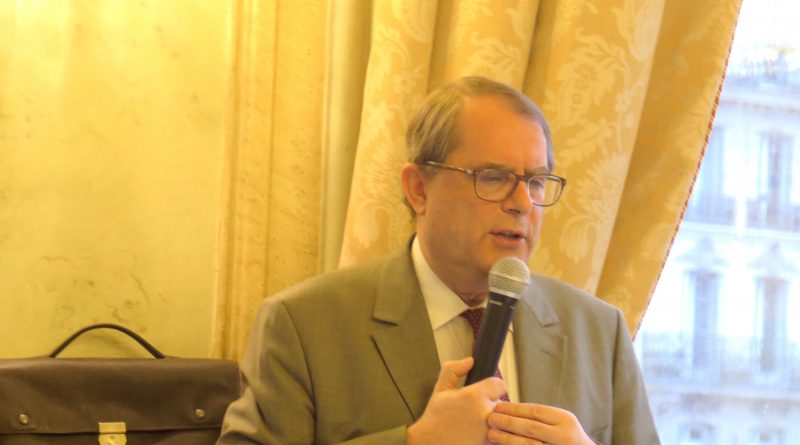 On March 27, in Paris, Antoine Bouvier, CEO of MBDA has received the press for a breakfast and conference at the Cercle National des Armées. For the fifth consecutive year MBDA recorded a high in orders, worth EUR4.2 billion, in 2017 while revenue amounted to EUR3.1 billion. By 31 December the company’s order book reached a record peak of EUR16.8 billion, giving the group prospects for sustained growth over the next five years.

In 2017 export orders (EUR2.6 billion) once again exceeded orders from the company’s domestic countries (EUR1.6 billion). This high volume of export orders, achieved despite a recent and increasingly stiff U.S. competition in Europe and the Middle East under the Trump administration, however stresses and confirms the competitiveness of MBDA ­the No.1 European missile company and enables the group to strengthen its critical mass vis-à-vis the US missile giants, like Raytheon, Boeing and more.

Export orders in 2017 notably include contracts with Qatar for MCDS coastal batteries and the arming of Fincantieri corvettes, but do not take into account the Typhoon armament for Qatar, a contract that is expected to enter into force in 2018 (see below). Other major contracts won in 2017 include VL MICA systems for GoWind corvettes in Egypt, Sea Ceptor for Type 23 frigates in Chile and Marte for fast patrollers in the UAE.

On the international front 2017 saw the creation in India of a joint venture between MBDA and its Indian partner Larsen & Toubro to meet the Indian Armed Forces’ future requirements under the New Delhi government’s ‘Make in India’ policy.

Domestically the year was marked in France by the first deliveries of naval cruise missiles (MdCN) and medium-range missiles (MMP) for land combat  now ordered also by Belgium and South Korea; in the United Kingdom, by the order for additional Meteor missiles to continue with the planned integration on the F-35 Lightning II; in Germany, by the formal kick-off of negotiations with the authorities on the TLVS air defence and anti-missile programme; and in Italy, by the choice of the CAMM ER missile within the framework of the replacement of the Aspide air defence missile system.

Co-operation in Europe on missile technologies also made aa series of significant progresses in 2017 which will deliver future economies of scale and enhanced competitiveness in the coming years. In this context, France and the United Kingdom launched the concept phase of the FC/ASW (future cruise/anti-ship missile) programme, which aims to replace not only the SCALP/Storm Shadow duet, but also the Exocet and Harpoon missiles in both navies.

Of note, the Franco-German summit of 13 July 2017 opened the prospect of co-operation in the segment of ground combat missiles fired from helicopters, and the development of a future European air combat system whose performance will require further leaps forward in the field of missiles. In the wake, 25 EU countries joined the Permanent Structured Cooperation initiative, which should facilitate the launch of European cooperation programmes. MBDA is proud to participate in the very first defence research programme (Ocean 2020 project), funded by the new European Defence Fund, which aims to explore future maritime monitoring and interdiction technologies.

Asked by journalists on the backlash expected from the coming Brexit next year, Antoine Bouvier pointed out that this event should have only a very limited impact on European defence as most of what is at stake comes under the framework of NATO or of direct bilateral agreements between EU members. The defence fold of the Brexit has meanwhile not been dealt with yet in Brussels. Indeed, MBDA’s CEO acknowledges the very positive job yet done by President Macron regarding more cooperation among EU members and the launch of common weapon programmes, particularly with Germany. This should include updating the Tiger helicopter combat potential with new missiles and the study of a future European combat aircraft toting an advanced misisle generation, all this accodring to the last Franco-German summit of July 2017 referred earlier which is also aiming at creating further defence savings through more standardization.

Meanwhile, Antoine Bouvier was proud to announce that the United Kingdom has just awarded MBDA a £400 million contract for the capability sustainment programme (CSP) of the advanced Brimstone air-to-surface missile, to extend its service life beyond 2030.

Under the CSP effort, MBDA will manufacture new Brimstone missiles dubbed Brimstone-2 for the UK Armed Forces in order to replenish the country’s inventory and to maintain the UK’s battlefield edge into the future. An order for this weapon is also expected from Egypt. They should arm the Rafale fightier-bombers of the Egytian Air Force before the end of this decade.

The new-build Brimstone missiles will incorporate all of the improved functionalities offered by the spiral upgrades of Brimstone that have taken place over recent years in order to meet UK operational requirements. These include the highly capable Dual Mode SAL/millimetric wave (mmW) seeker, enhanced autopilot, and the new insensitive munition compliant rocket motor and warhead.

The effort will also include a significant memory and processing update to the missile in order to enable all of Brimstone’s functionalities and to future-proof the missile. Brimstone CSP will deliver the baseline hardware standard that will be evolved through software enhancements which will result in a common stockpile of identical missiles for use on fast jets, attack helicopter and remotely piloted aircraft systems (RPAS) for the UK MoD and will enable the manufacture of Brimstone to meet export orders. CSP modes will be cockpit selectable providing users with simple access to the unique performance capabilities of Brimstone against the most challenging of targets.

Chris Allam, MBDA Group Engineering Director and Managing Director of MBDA UK, said: “I am delighted that the UK has chosen to proceed with the Brimstone capability sustainment programme. This new investment by the UK is an endorsement of the unique and world-beating capabilities offered by Brimstone. The CSP contract forms the basis for the through-life sustainment and upgrade of Brimstone to 2030 and beyond.”

Brimstone will be carried by the Royal Air Force’s Typhoon fighter aircraft and is expected in the future to be carried by the RAF’s new Protector RPAS and the British Army’s new Apache attack helicopters. By using Brimstone across different platforms and services, the UK will receive significant logistical advantages and cost savings.

MBDA CEO Antoine Bouvier declared: “The group continues to move forward on each of its three strategic pillars: to give its domestic countries guaranteed access to missile technological sovereignty, to pursue European consolidation, to develop international activities; these three actions jointly contribute to the critical mass of MBDA, that is its ability to achieve long-term development faced with its global competitors. We continue to view the future with optimism, targeting, as we expected, EUR4 billion in revenue by 2020. To support this growth, the group plans to hire nearly 1,200 people this year, after recruiting 1,000 in 2016 and as many in 2017.”