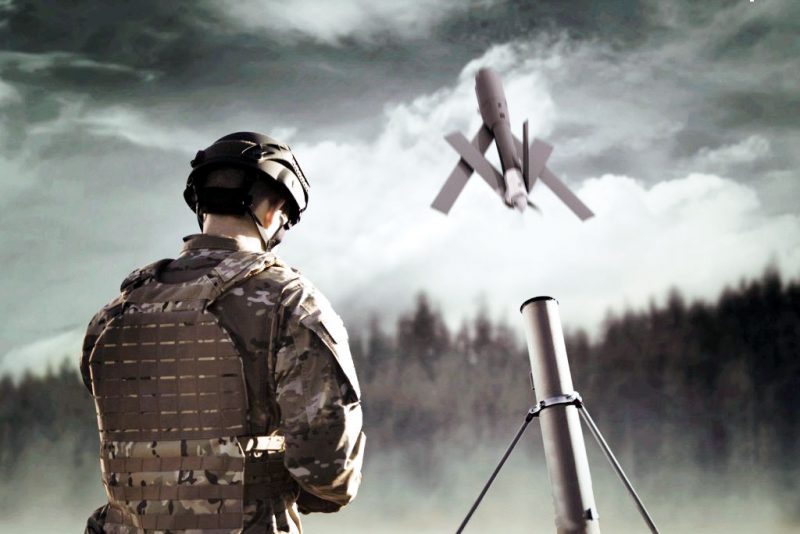 The task of presenting the newly born member of AeroVironment loitering missiles falls on the shoulders of Todd Hanning, the company Product Line Manager at Tactical Missile Systems business unit. “Switchblade 600 is the result of working closely with our US DoD customers, who wanted the same features of the Switchblade 300 but with greater effects,” he explains, underlining that the new system does exactly that as it features enhanced effects, greater stand-off range, and extended endurance, while remaining an all-in-one man-portable solution.

The Switchblade 600 can be launched from the ground as well as from air or ground platforms. The missile is fitted with a two-axis, four-sensor gimbal integrated sensor suite that hosts dual electro-optical and infrared sensors. In the standard configuration it can hit a target at over 40 km standoff range, and once over the target area it can loiter for over 20 minutes, if necessary, to identify the target before diving onto it. Of course the Switchblade 600 maintains the wave-off capability of the smaller system as well as its re-engagement capability. Cruise speed is over 112 km/h while dash speed is 185 km/h, which adds the kinetic energy to that of the anti-armour warhead developed according to customer’s requirements. The user can also select the optimal angle of attack, depending on the type of target and the surrounding scenario. The modular approach typical of AeroVironment products will allow the company to adapt the Switchblade 600 to the missions required by new customers, currently a number of US DoD entities are lining up for the system, therefore new types of payload may be developed, i.e. one devoted to antiradiation missions to neutralise enemy radars. According to AeroVironment the current warhead weighs around five times that of the Switchblade 300, which gives considerable lethality to the munition. The length of the airframe is 1.3 meters, its weight being 22.7 kg, no data being provided about the wingspan, the architecture being the same of the smaller system, with two foldable tandem wings. The weight of the overall system, including the SB600, the launcher and the Fire Control System, made of the tablet and the long-range antenna, is 54.4 kg.

The 40+ km range is given by the digital AES-256 encrypted data link, however considering the endurance and cruise speed the Switchblade can transit out to 80 km; to do so the system needs two long range antennas deployed on the field, the command being relayed from one operator to the other thanks to the handoff capability of the data link. The company continues to work on the power system, in order to further extend the system range, while keeping the same weight to allow one-man operations. With the Switchblade 600 Aerovironment introduced a new tablet, of the touch screen type, which makes the system control even more intuitive. It also includes the mission planning system as well as the simulation software. A lock-on mode allows high precision engagements both against stationary and moving targets, while as said the mission can be aborted at any time, until the very last moments before the hit.

AeroVironment Switchblade 600 is being proposed for various programmes with a number of DoD customers, no more details being provided. “The only programme we can talk about publicly at this time is the US Marine Corps OPF-M (Organic Precision Fires-Mounted) programme, of which we are one of the competitors in the Phase 1, Development and Demonstration, the fly-off scheduled for January 2021 aiming at downselecting a single supplier,”  Brett Hush explains. The USMC requirement includes a vehicle-based multipack launcher, therefore AeroVironment is working on that in order to demonstrate it at the fly-off in a few months time.
The system development started some time ago: “the initial development started in 2014, and we demonstrated live fire within 12 months,” said Brett Hush, who was already with AeroVironment at that time. Since then the company carried out an intensive development work: “In the last two years we had very busy flight tests, mostly ground-launched, against both fixed and moving targets, with more than 60 flights in our test programme, and we will continue to do so next year, possibly progressing in the maritime and air-launched environments as the system was specifically designed also for that,” Todd Hanning says. As for the programme status, Brett Hush explains that “a number of customers have now pushed the ‘I believe’ button and are moving forward with requirements for this medium-size loitering missile. The status of the programme therefore depends very much on which customer we are considering, as we are actively engaged with multiple distinct DoD customer for this capability today,” while Todd Hanning adds that “the core system is over TRL7, the Initial Operational capability being more a programme gate which is related to the customer, but we can see probably the IOC with the Marines to be attained in 2021. We already started the Low Rate Initial Production to field systems, and have the capacity to address the demand.”

Looking at further evolutions of the system, another feature that might be added in the future is the capability to recover the Switchblade 600, should the mission be aborted; according to AeroVironment this was not part of the initial requirements, but some potential customers raised the question and the company has a project in place to answer that need. Several activities are going on for new versions of the various Switchblade family members, among them the 600, to cope with new CONOPS, modularity allowing to adapt the systems to customers’ needs. 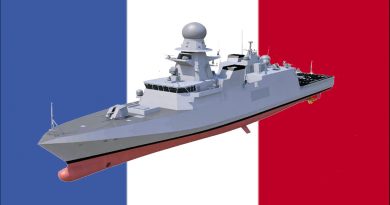 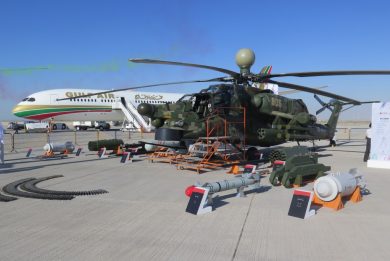 17/11/2021 Olga Ruzhelnyk Comments Off on Russian Helicopters: the Night Hunter takes the stage at Dubai Airshow 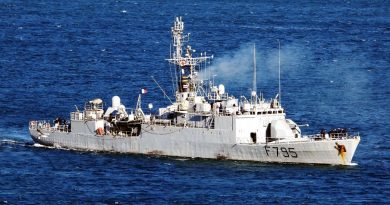