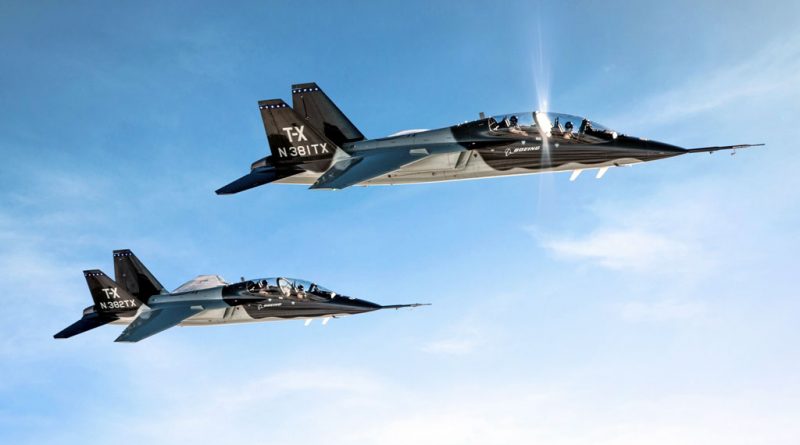 “We have put a bunch of kids in the jet, and we could not have written a better script than what came out of their mouths: ‘its just like my iPhone’, they said, playing with the Advanced Cockpit System (ACS), and it really is that way,” Ted Togerson, Senior Director Program Integration Office, T-X Advanced Pilot Training Program, tells the audience during the briefing at the St. Louis facility, where the new trainer for the US Air Force was developed, the service still having to provide a name for it. In fact the T-X was the first aircraft to fly with the new single display touch screen. 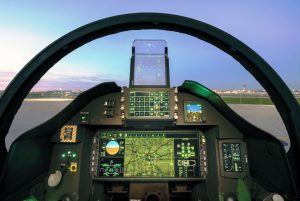 “As we were competing against proven, in-production aircraft, we had to make things different,” Paul Niewald, Senior Director and Chief Engineer of the T-X explains, “so we exploited the latest simulation systems to find out the best configuration, then we used computational fluid dynamics to get the aerodynamics loads and analyse them, all this allowing us to shorten development times and reduce the use of wind tunnel models. Quick iteration was also used in software development: here too we adopted a new approach, issuing a new release every 8 weeks, which allowed us to reduce software development time by 50%.” In the design phase Boeing exploited at its most 3-D modelling, using Unigraphics NX, which not only allowed again to spare on time but also increased the accuracy of the engineering work: “over 75% of the designed elements didn’t needed any redesign,” the T-X Chief Engineer said. All this allowed the T-X to take off for the first time 36 months after conception. 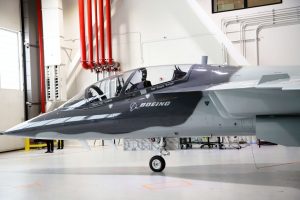 Cost was a key design issue. The T-X is mostly an aluminium aircraft, which reduces not only manufacturing but also maintenance costs. “We incorporated a lot of advanced manufacturing techniques coupled with model based design, allowing for faster assembly using fewer tools and enhancing ergonomics,” Paul Niewald explains. One example is the canopy: “we used injection sealing technology, which eliminated 600 fasteners, and this resulted in an assembly time of eight days versus the planned six weeks,” he adds. “All such things allowed us reducing labour by 80% on the aircraft, and it also impacted quality, rework being only 0.3%,” Paul Niewald concludes. The production of the two EMD-ready aircraft followed the planned serial production scheme, allowing a first debugging of the industrialisation process. All this led then Air Force Secretary Heather Wilson to state that “through com­pe­ti­tion we will save at least $10 billion on the T-X pro­gram.” 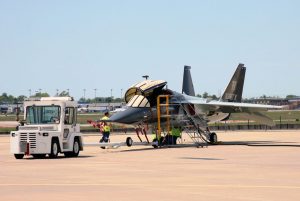 However the T-X is not a stand-alone item, it is part of a training system, and to be cost-effective maintenance is a key issue. Boeing included since inception in the team representatives of the training and maintenance community, “and their vote mattered when coming to a decision,” Ted Togerson underlined. “We worked hard on the stadium seating in order to provide the best view also for the back-seat pilot, and even wings start behind his position to ensure maximum visibility,” Steve (Bull) Schmidt, the T-X test pilot says, “and we also made sure that functionalities in the back can do about everything what the front can do.” The aircraft is JPATS 1-7 compatible, which means it can be flown by 95% of the female pilot population. This is also true for the side stick controller, a lot of work having been done on stick forces in order to give a good feeling while avoiding wearing out students when doing air combat manoeuvres. 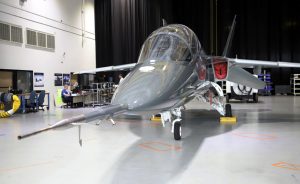 T-X n.1 could be seen in its hangar; we avoid using the word ‘prototype’ because in St. Louis everybody made it clear that the two available aircraft are considered EMD-ready; this means that although they were built prior the final specifications were issued, they are so close to the final configuration that they will be flown in the Engineering and Manufacturing Design phase to verify and certify a number of test points. And this is the reason why none of them will be exhibited at the Paris Air Show, as they will be busy in test flights. “Until now,” that is mid-May, “we flew 71 times, most missions being carried out by the T1,” Steve Schmidt says. According to its test pilot the aircraft flew 15 sorties without a squawk, and it was possible to fly the same aircraft four times in a single day, showing the quick turn-around time, a key issue when dealing with pilots’ training courses.

This is also due to the integrated design team approach: the presence of maintainers was key in keeping in mind some issues, and on the T-X not a single tool is required to access al major subsystems such as computers, avionics, etc, it’s all push buttons, panels folding down at the height of a normal person, replacing a subsystem being thus very simply. “Everything that may be accessed underneath the wing is also easy to access,” Boeing officials explain, “and it is easy to get the engine out of the aircraft.” The fuel is all in the fuselage therefore wings are dry, which easies maintenance, while the side opening canopy allows replacing ejection seats without removing the canopy itself, and allows easy maintenance on the latter. 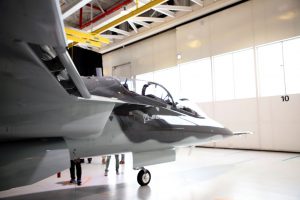 The T-X high cambered wings are fitted with leading edge extensions (LEX), which increase high angle of attack manoeuvrability, as well as with two-position slats, again for high manoeuvrability; these pop out when the pilots start manoeuvring and the angle of attack increases, and pop back as soon as the latter is reduced. The wing has trailing edge flaperons, very much like the F-16, to roll the airplane, and differential stabilisers for manoeuvrability at high angle of attack and departure/spin recovery. The twin rudders also improve manoeuvrability and can open up the back in view of an air refuelling provision. For the time being the US Air Force did not included it among the requirements, “however should they ask for it, we can retrofit these aircraft as the structural design has been done, and there are just a few extra things that we will do in the EMD to be sure it is fully provisioned,” Boeing officials told. There will be no need to change any location of systems or modify structures, and a space for the refuelling receptacle is now hidden by a cover. 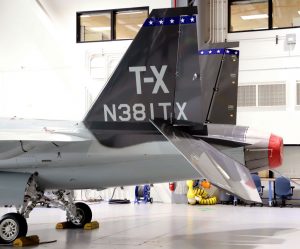 One of the few known subcontractors, apart from Saab which has do-developed part of the aircraft and is responsible for the manufacturing of the aft section, is General Electric, which provides the F404-GE engine; “it is a reliable engine, and with the afterburner I can really accelerate the aircraft,” Steve Schmidt remarks, adding that “it is like flying a fighter, it is very manoeuvrable, the pitch capability is excellent, we have no angle of attack restrictions, the roll is extremely crisp and matches that of today fighters.” Collins Aerospace will provide ACE 5 ejection seats, the two current aircraft being fitted with Martin Baker Mk16s, as well as the landing gear, the Triumph Group providing airframe mounted accessory drives and hydraulic systems, and L3 Technologies being responsible for navigation and surveillance systems.

The US Air Force awarded Boeing Defense a $9.2 billion contract for the production of 351 T-X aircraft, 46 simulators and associated ground equipment. “The baseline production rate will be of 48 aircraft per year, although this can be increased if needed, first deliveries to Randolph Air Force Base being expected in 2023 while the Initial Operational Capability is forecasted for 2024,” Paul Niewald tells the audience. 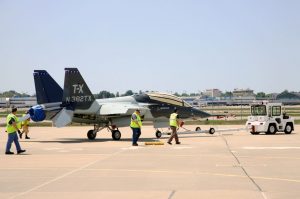 The visit to the T-X Customer Engagement Center (CEC), hosted in Building 106, allows touching for real the simulators that are part of the training system. As anticipated the contract includes 46 Operational Flight Training (OFT) simulators, which might increase to 120 should all options being confirmed; the single seat cabin, the instructor position is based on standard consoles, is fitted with Boeing’s CRVS (Constant Resolution Visual System) that ensures maximum resolution on all 300°. The key issue is that as Boeing is responsible for the aircraft software, this will be updated simultaneously on aircraft as well as on simulators, avoiding the usual time-gap between the real aircraft and training aids, typical when responsibility of the two falls on different companies. All OFTs can be networked and this, together with embedded virtual systems such as radar and weapons, allow providing embedded live constructive training at all levels. A number of part task trainers were also visible at the CEC, as well as a Weapon Systems Trainer (WST), the latter featuring the two seat configuration of the actual aircraft as well as a 360° visual, to allow full engagement simulation, the WST being currently used mostly for development work.

Boeing and its main partner Saab are looking at the export market, Sweden being an obvious target when the Saab 105 (SK 60) replacement programme will be launched, however the T-X was designed with some growth potential in terms of space, weight and power, to be developed into a light attack and aggressor configuration. “We don’t have any requirement yet, and we won’t commit hardware without that kind of requirement,” Boeing officials stated. 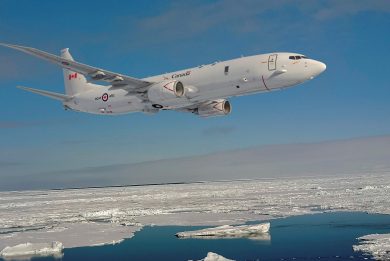