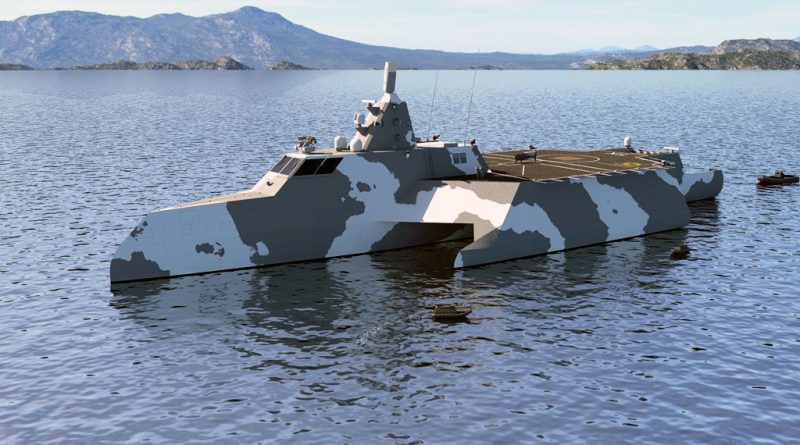 Innovative in shape and concept, this might be the definition for the TX Ship, unveiled by Thales and Steller Systems at the Maritime Capability Conference that preceded the opening of DSEI 2019. In terms of shape the TX Ship has an inverted bow and a trimaran configuration that allows increasing lateral stability as well as space available, as it provides an ample flight deck amidship, with a large mission bay at the lower level.

Based in Nailsworth, Gloucestershire, Steller Systems is an independent consultancy company specialised in naval architecture and marine engineering. The study that led to the TX Ship was commissioned by Thales UK, which is acting as integrator, providing all command and control and sensors.

A 70 meters long ship, with a 25 meters beam and a 600 tonne displacement, the TX has a reduced crew, maximum 15 complement; however in the aim is to make it a fully unmanned ship, hence the “T” for transition, as it aims at increasing navies confidence in large unmanned ship. The crew will be hosted in a dedicated self-contained module fitted with all needed systems; when operated as an autonomous vessel, it will host specialist teams, i.e. Special Forces or other.

The TX Ship flight deck is equipped with elevators connecting it to the mission bay, which is designed to host standard ISO containers; these can be fitted in different roles, from accommodation to host crew members or mission related personnel such as Special Forces detachments, or mission systems, such as VTOL UAVs, UUVs, weapon systems, etc. The container-based system allows for a rapid rerolling. Astern, the ship is fitted with a well deck allowing launching manned or unmanned boats. According to the two design companies the TX Ship can be used for different roles, such as mine countermeasures operations, ASW picket ship or unmanned decoy, anti-surface warfare operations, electronic warfare, Role One casualty medical facility, ISTAR, covert forces insertion/extraction, emergency or transit Helicopter Landing Site, amphibious support/littoral strike using land weapon systems such as MLRS from its deck.

In the helicopter support role the TX Ship can support up to the Royal Navy Merlin; this can either use the TX as a refuelling platform or bring aboard supplies to extend the ship mission, or new modules to switch it to new roles not planned when it sailed from harbour. When used as mother ship, the space between the external hulls of the trimaran and the main hull, both at port and starboard, are fitted with automated launch and recovery systems allowing operations with RIBs or other types of surface or undersea systems, manned or autonomous.

Not much was said about the propulsion system, top speed being 30 knots, with cruise speed of 18 knots; maximum range speed is 12 knots, which ensure the TX Ship to sail for over 600 Nautical Miles. Endurance is of 20 days when operated manned, which doubles if the TX Ship is used in the full autonomous mode. A semi-autonomous mode is also envisaged, man in-the-loop and man on-the-loop modes being considered, the former controlling the ship remotely while the second exploiting autonomous functions while monitoring.

Thales will exploit its participation in Project MAPLE (Maritime Autonomous Platform Exploitation) to cope with unmanned functions, its M-Cube mine counter measure management system being used for MCM operations. The company will also be responsible for the sensor suite, which will not be limited to usual sensors but will also include elements to allow fully autonomous onboard operations by unmanned air assets, in the form of optical and inductive systems to programme and recharge UAS on the flight deck.

Coming to the way ahead, Thales intends to build a prototype in order to start testing systems and concepts of operation, thus starting the lessons learned process that will bring in the end to an operational vessel.