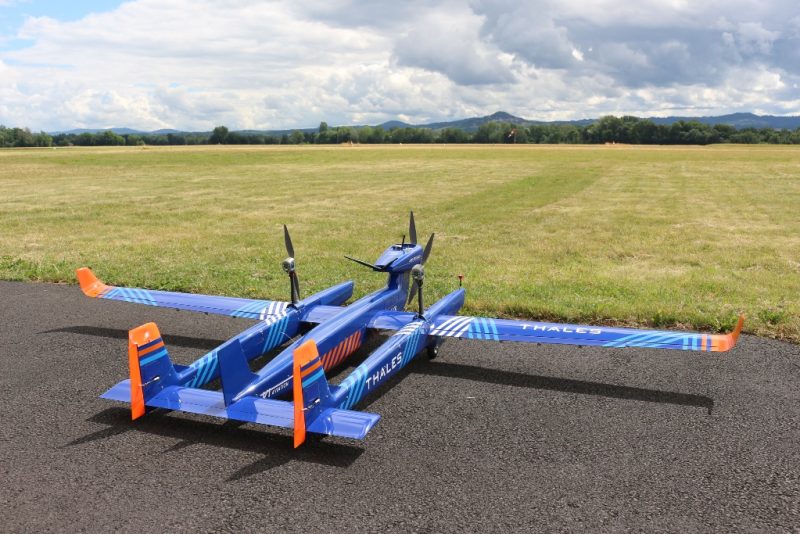 Named UAS 100, the programme launched by Thales was unveiled in a virtual press conference on Tuesday July 6th, the aim being to have a certified light UAS by the end of 2023 that will cope with the new European SC-LUAS (Special Condition – Light Unmanned Aircraft Systems) regulations. The company announced its programme after the half-scale model of the future system successfully carried out its maiden flight, which exact date was not unveiled.

While the main driver is the development of a light UAV system capable to fly in civil airspace comes definitely from the intention to widen the market of drones commercial use, thanks o a much greater degree of freedom, which would apply also to government applications, as it will inherently allow flying over populated areas. While military developments are foreseen, “it is designed firstly to be a safe and simple system for government and private usage, and will then be adapted for military missions, but no decision has been made to date,” the two speakers said, the fact that the programme is carried out in cooperation with the AID (Agence de l’ Innovation de Défense), the French defence innovation agency created in 2018, shows well an interest from the French military. In fact many of the solutions that are being developed to increase reliability, which means safety, allow improving the capability to prosecute a mission even after two major failures. On the other hand safety might become an issue also in military operations; more than one wondered if it was ethic to fly Phoenix UAVs over Kosovo in the early 2000, 12 such systems crashing during operations, some of them victim of enemy fire but many due to technical failures. Should one of them have fallen over a populated area causing casualties, the collateral damage issue would have been raised, and operating over urban areas is sometime a must in asymmetric warfare, as well as when military assets are used to work alongside homeland security forces. Not to mention training issues in country.

Back to the UAS 100 programme, the airframe as well as control laws were designed by Thales in cooperation with Issoire Aviation, the company based in central France that was the first in the world to certify an all carbon aircraft. The team is completed by Hionos, a Paris-based start-up specialised in autopilots for drones.

The final product will be a platform of less than 100 kg with an over 100 km range (hence the UAS 100 name), a 5.4 meters wingspan and a 10 kg multiple payload capacity; according to speakers the latter will not be fitted according to the classic logic used on military UAVs, no more details being provided.

The only photo available of the half-scale prototype doesn’t allow to see many details; the aircraft has a triple body fuselage, the two side ones featuring vertical rudders while the central one seems fitted with a vertical fixed fin. At the front the central element of the fuselage features a vertical sponson carrying a pod that might well host the internal combustion engine ensuring battery reloading that provides an increased endurance, up to 5 hours in the final model according to data provided by Thales, but should also drive the central propeller; not many technical details were unveiled, but no air intakes and exhausts are visible in other parts of the fuselage, although such a position might not be the ideal one for centre of gravity issues. The two lateral propellers are mounted on spikes fitted close to the rear of the wing, and are clearly driven by electric motors. According to speakers the layout allows very short take-off runs “much less than a football field”, while once aloft the power will be reduced to save energy and increase endurance. The availability of multiple motors is also increasing system safety, the aircraft being also able to fly all-electric, allowing acoustic signature reduction, while the traction available will allow flying in strong winds, no data being provided as flight trials have still to explore the flight envelope. An all-electric version might also be developed, but will have a reduced endurance. Limiting the environmental impact was one of the design features, the UAS 100 wings being fitted with winglets to improve their efficiency. Although no details were provided, the choice of Issoire Aviation as a partner makes it safe to say that the airframe should be mainly made of carbonfibre elements.

Long range UAVs will definitely not limit their operational altitude below the 150 meters above ground, the maximum height currently allowed for non-certified systems, the UAS 100 being designed to fly up to FL 100, which means 10,000 ft or over 3,000 meters. Communications will be ensured by direct radio link when operating within line of sight, SATCOM for beyond line of sight operations, and commercial networks such as 4G and 5G, “the system automatically switching to the best communication channel, which further adds to safety,” Thales representatives stated. The UAS 100 will of course be fitted with recovery features in case of loss of contact with the control station, however it was clearly said that “it is not a remotely piloted vehicle, as we are entering a wholly new era in the UAS world so after take off the aircraft will operate autonomously, the operator only acting as supervisor.” This might allow a single operator to b responsible for multiple aircraft, but no answer was given on potential numbers.

A key issue for flying in the civil airspace is the visibility of the UAS from ATC sensors and other aircraft, as well as its own capacity to sense the air traffic and avoid it. Thales is currently working on that issue, the initial flights being carried out with the FLARM cooperative anti-collision system, however opening the flight envelope will require additional sense and avoid systems to be installed and tested, the aim being to demonstrate the required level of insurance both in cooperative and non-cooperative scenarios. “We are only at the beginning of the story,” the speakers said, this being the second step in their development roadmap.

The roadmap saw the first step, the flight of the half-scale model, in 2021, which happened successfully. This will undergo flight tests and will incorporate increased flight autonomy features, this development being carried out in parallel with that of the full-scale system, which first flight is planned for 2022. Leveraging the autonomy building blocks tested on the smaller aircraft, this should be quickly brought up to a level in order to allow full certification by late 2023. Will the full-scale prototype be the final configuration of the UAS 100? This is apparently not sure, the speakers stating that “we might find an optimisation between the half-scale and the full-scale aircraft, to provide the market with a light, cheap and easy to fly system.”

The UAS 100 will be an ITAR-free product and beside the usual selling schemes Thales is ready to provide it as a service, with contracts based on missions or flight hours. According to estimates provided by Thales over 100 000 long-range UAV will fly worldwide in 2030, which led the company decision to launch the UAS 100 programme to capture part of that lucrative market.

The UAS 100 is designed to fly in Sail V and Sail VI category (high risk) according to EASA (EU Aviation Safety Agency) SORA (Specific Operating Risk Assessment), this estimate being based mainly on the population density, mass and speed of the drone. Regulations are being gradually implemented, the Thales programme following closely those evolutions to be among the first, if not the first UAS of its category to be fully qualified for operating in the civil airspace.

The UAS 100 will be demonstrated at the UAV Show that will take place in Bordeaux on 19-21 October 2021, COVID permitting, tests and demonstrations being planned in the last day of the event. As for military applications we must wait and see. 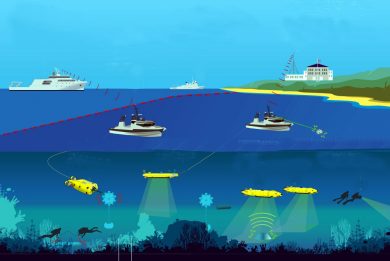