Operated by Dassault Aviation at the Istres base as part of the F3R program, the prototype took off on July 27, mounted on a single-seater aircraft, for a flight lasting over 2 hours. This test flight collected high-quality images taken using the “day” channel, and offered remarkable performances in pointing and telemetry.

Designed by Thales, TALIOS is the first optronic targeting pod to cover the entire decision chain, from intelligence gathering through to neutralization. With the latest-generation high-resolution infrared and electro-optical sensors, line-of-sight stabilization, and high performance image processing its capabilities range from deep strike with precision-guided munition, to air-to-air target identification and close air support, both during the day and at night.

The integration of the TALIOS pod, which will included on the French Air Force and Navy Rafales, is a major part of the F3R standard development on the Rafale combat aircraft. The success of the first TALIOS flight on a Rafale is the second key event in its development program for 2016, following on from the first flight on the Mirage2000 test bench aircraft. The TALIOS pod development and Rafale integration programs run in parallel. The adjustment and performance measurement tests will continue throughout 2017. They will lead both to the qualification of the equipment and to the qualification of the F3R standard for the Rafale by mid-2018.

The Military Programming Law 2014-2019 anticipates an order of 45 pods for the Air Force and the Navy, 20 of which have already been ordered from Thales by the French Defense Procurement Agency (DGA). Delivery of the mass-produced equipment will start in 2018. 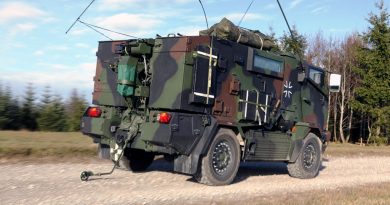 KMW will supply Mungo N/C Recce to the German Army 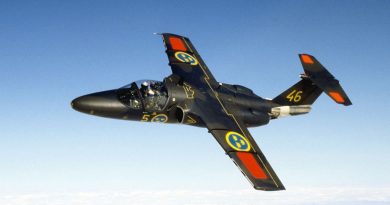