The Rotorcraft and Unmanned Systems Asia trade fair that opened its doors in April 18-20 at the Changi Exhibition Center next to the Airport of Singapore, was a success for not only its organization but for the presence of around 55 international and local companies from 42 countries, but there were problems at the delegation and professional level. 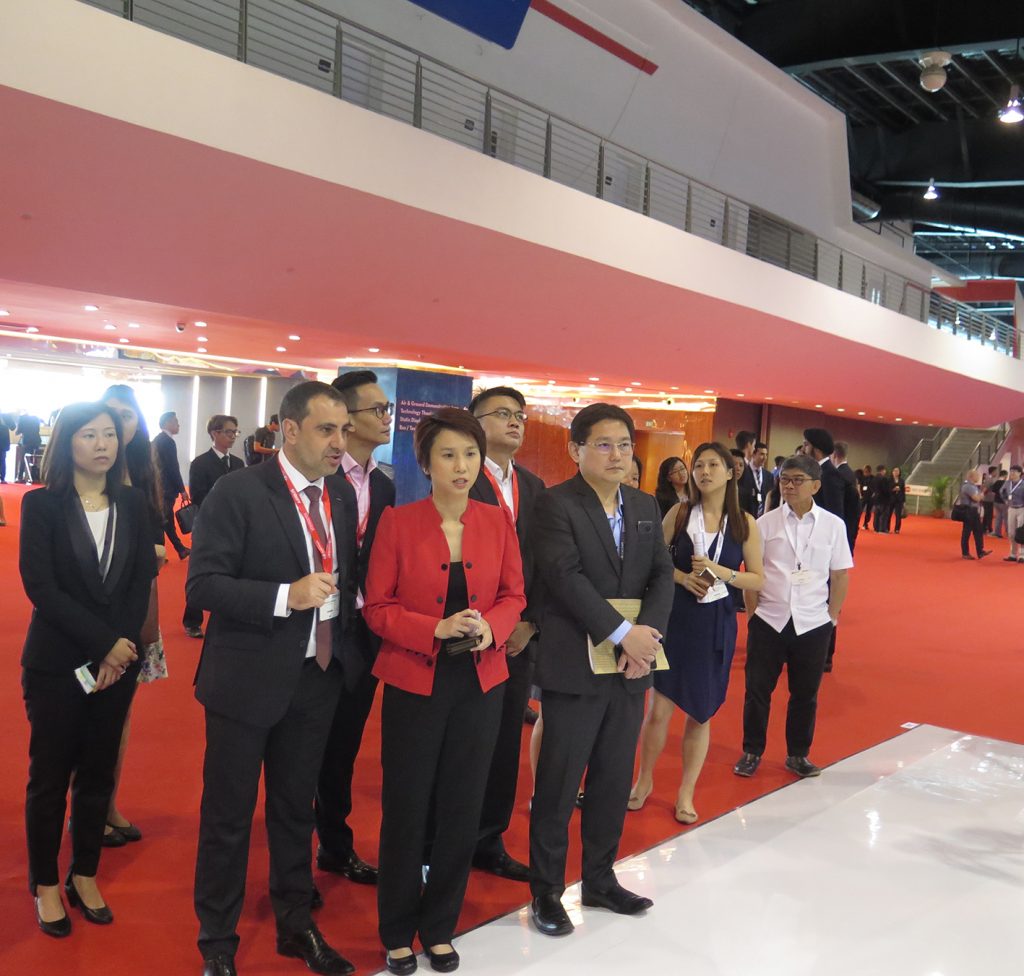 This first bi-annual aerospace fair was inaugurated by Mrs Low Yen Ling, Parliamentary Secretary at the Singapore Ministry of Trade and Industry on May 18 in the presence of delegates, VIPs and invited guests, said: “That the agency UAS Committee, chaired by the Ministry of Transport, has put in place a whole- of government contract to aid public agencies in the procurement of UAS services, for use in areas such as inspection, surveillance and mapping”.

She continued by saying “ Our public agencies are already actively looking at how UAS can support their operations, as well as enhance the safety or their officers, citing the example of drones being used to dispense larvicide in hard-to-reach areas by the National Environment Agency’s mosquito control Operation”.

In the same time, she said: “The land Transport Authority is also exporting the use of drones to inspect Singapore’s mass rapid transit systems and mad tunnels, low disclosed.

Meanwhile, Low said that the UAS Committee has been developing a regulatory framework to encourage the use of the technology in Singapore.

Asia Pacific remains a significantly important market for Airbus Helicopters. With over 1,900 Airbus helicopters in service, across 25 countries in the region today, the company is committed to growing its customer support network in this region, which currently covers three support hubs, 12 customer centres, 20 maintenance centres and four training centres.

During the exhibition, it was announced that business aviation operator PhilJets Group was to deepen its relationship with Airbus Helicopters with a new order of one new H145 and two H130 helicopters. With this additional order, PhilJets, which currently operates six Airbus rotorcraft including four H130, one EC130 B4 and one AS350 B2, becomes the Philippines’ largest operator of Airbus helicopters in the country, with a total of nine aircraft.

Both the twin-engine H145 and the single-engine H130 helicopters are scheduled for delivery in the last quarter of 2017. These new helicopters will be used to support PhilJets’ growing VIP, corporate and tourism businesses throughout the Philippine archipelago, with the possibility of adding new missions, as the operator explores expansion plans into the emergency medical service (EMS) and cargo transport sectors.

The second Airbus Helicopter order was from Bangkok Helicopter Services, a division of Thailand’s largest healthcare provider Bangkok Dusit Medical Services, which will receive a new H145 helicopter becoming the first in Asia Pacific region to operate an H145 aircraft that is fully configured for EMS.

The EMS-configured H145 is well suited for hospital-to-hospital patient and intensive care transportation, benefitting from the easy and safe patient loading through its wide side sliding doors and large rear clamshell doors. With unobstructed, near 360-degree cabin visibility, the pilot can easily manoeuvre through tight spaces, to reach patients for emergency evacuation.

And of the last day of the show, the last order come from India’s Heritage Aviation which announced the addition of two new state-of-the-art Airbus Helicopters’ H130 aircraft for its fleet. These helicopters will strengthen the company’s position as a leader in passenger transportation missions including heli-pilgrimage, aerial work and VIP transportation missions in India.

The two H130s will complement Heritage Aviation’s existing fleet of two H125 helicopters which were inducted in 2015 from Airbus Helicopters. The H130 helicopters will be delivered with seven passenger seats and one of the aircraft will be fitted with cargo hoist equipment to carry an external load for aerial work missions.

Safran Has had a base in Singapore for the last 25 years, covering all of Southeast Asia, 18 countries in total from India and south Korea down to the Philippines and Indonesia.

In terms of support, Safran Helicopters Engines represents around 10% of the company’s global activity. From Singapore the company support 242 operators and has 1060 engines in operation in the region, including the Malaysian and Royal Thai Air Force’s H225M helicopters and the Republic of Singapore Air Force’s H120 training helicopters and the 30 Super Puma AS332/532, operating with Makila 1A1 engines although the latter type is in the process of being replaced.

At Rotorcraft and Unmanned Systems Asia trade Safran Helicopters Engines showcased its Arrius 2R turboshaft that powers the Bell 505 Jet Ranger X. It is designed to deliver performance and power within the 500shp range, improving safety and lowering pilot workload via the dual channel FADEC, according to Safran. Built around a proven core, the twin-model configuration offers low maintenance and operating costs.

And, The Arrano powers the Airbus Helicopters H160, the engine utilising components produced using the additive manufacturing process, which may be used to replace the Makila in the Singapore Super Puma.

5Star Plans contracts have already been signed in Spain, Norway and United States and the Aero Peace’s contract is the first one finalised in Asia.

For the civilian market, Safran engines are being utilised for EMS, offshore, corporate and VIP missions. Countries that are growing in interest for the company like India, Indonesia Thailand and south Korea.

St Engineering exhibit at Rotorcraft and Unmanned Systems Asia trade a suite of unmanned technologies and small UAS. Showcased during the show was the Autonomous Multi-Robot Exploration of Unknown Environments. This four-wheeled robot can traverse different areas without overlapping to create a collaborative 3D map in real time.

Such robots could save time for emergency response teams. A system of up to six such devices could rapidly deploy to map a disaster-hit zone. The key technology is the use of 3D laser scanners for mapping. Each UGV is fitted with a Teledyne laser scanner and a LIDAR collision-avoidance system. White GPS fitted the vehicle is designed to operate without it to optimise its performance indoors. The system should be ready for trials within a year.

Seen for the first time in Singapore Airshow 2016, was the 2.4m-long Jaeger 6 UGV 6×6 currently on trial at a Singapore Armed Forces camp. St Kinetics said that it is more suitable for surveillance and sentry operations. The communication link between the operation control unit of the UGV was initially via a Wi-Fi connection but, due to line-of-sight (LOS) and range issues, the company has upgraded the system to an encrypted 4G mobile network.

On board, ED/IR cameras are able to auto-detect human features, and the vehicle is also equipped with loudspeakers and high-intensity xenon searchlights.

In terms of multi-rotor UASs, St Aerospace is focusing on its tri-rotor U-Star Y even though the U-Star X quadrotor also exists in the company’s range. Three examples of the 5kg U-Star Y were exhibited at the show, each with a different payload weighing up to 1kg, a high-definition camera, an ED/IR sensor and a hazmat detector.

Bell Helicopter displayed in Rotorcraft and Unmanned Systems for the first time the 505 JetRanger X light helicopter. And like Airbus Helicopter, Bell announced a number of contracts with different clients in the region. The first was from Terra Barbaza Aviation for a Bell 429. This is the customer’s second aircraft and will be used for corporate and VIP transport in the Philippines. The second announcement from Bell Helicopter, a Textron Inc. (NYSE: TXT) company, was the purchase agreement of a Bell 429 for Meghna Aviation Ltd. (Meghna) in Bangladesh, making it the first Bell 429 to be operated in Bangladesh providing corporate, leisure and utility charter.

Designed with the future in mind, the Bell 429 meets or exceeds today’s airworthiness requirements to enhance occupant safety, with the adaptability to remain at the forefront as mission requirements evolve. Innovation is at the heart of the Bell 429 light twin helicopter. The use of metallic and composite parts in its construction creates the perfect balance between rigidity and flexibility, safety and durability. An advanced avionics and systems monitoring suite ensures outstanding maintainability and aircraft readiness.

The third announce Bell Helicopter, a Textron Inc. (NYSE: TXT) company, was the delivery of two Bell 429s to PT. Carpediem Mandiri for supply to the Flight Calibration Department of the Indonesian Ministry of Transportation. The delivery marks the first two Bell 429s to be used for flight calibration operations throughout Indonesia, performing instrument calibration for Helicopter Ground Instrument Landing and Departing Systems at airports, heliports and helipads.

The last announcement was that Tata Steel Group has purchased a second Bell 429 helicopter to support their steel production operations. Tata Steel Group has been in operation for over a century and is among the world’s top steel companies with operations in 26 countries. The company is headquartered in Mumbai, Maharashtra, India. The helicopter will be based out of Tata Steel’s Aviation facility at Jamshedpur in eastern India and will address the transportation needs at its steel plants and mines in the region.

The state-of-the-art technology in the Bell 429 includes a fully integrated glass cockpit, advanced drive system, best-in-class WAAS navigation and IFR capability. The Bell 429 has more cabin space than any other light twin helicopter, with flat flooring and seating for seven passengers and one flight crew.

Sikorsky, a Lockheed Martin Company, announced in Rotorcraft and Unmanned Systems a plans to expand its S-92 and S-76 helicopter support services in the Asia-Pacific region. Thai Aviation Services is scheduled to become the first Sikorsky Customer Support Center in Thailand by the end of 2017. Customer Support Centers enable quick access to Sikorsky logistics and spare parts inventory for operators while providing advanced service capabilities. This support centre will represent Sikorsky’s seventh in the Asia-Pacific region and add to the growing network of 20 Sikorsky support centers worldwide.

Better known for unmanned aerial systems, IAI exhibited an automated container port, labelled the Robotic Container Management System (RCMS). It is an autonomous storage system for unloading ships or even trains at train depots. A crane unloads containers from ships as normal, with the containers then transferred to what IAI calls autonomous ground vehicles (AGV). These AGVs, able to move in any direction and using automated elevators, then shift the cargo to storage cells. When the truck arrives, the AGVs then deliver the appropriate container.

IAI worked as part of a consortium to conduct a two-year study with the Koper port in Slovenia and Gdansk port in Poland to study feasibility and algorithms.

RUAG was present in Rotorcraft and Unmanned Systems 2017 true the office how opened last November in Subang near Kuala Lumpur, is in full flow as it overhauls starter generation for helicopters. The company subsequently incorporated in December 2012 as a joint venture with a local partner, initially to focus on opportunities with the Malaysian Air Force. Gradually it has expanded into the civil aviation sector to perform MRO as well.

Answering the question with who RUAG works in this region, Jones said:”RUAG Aviation Malaysia works with all four main players in terms of starter generators. Honeywell, Safran, Skurka and Thales”. He added:” that the facility will repair starter generations for ATR turboprop aircraft in the future too”.

Jones said: ”We are also now setting up the requisite workshop facilities for aircraft lighting components (search and landing lights) and fuel boost pump capabilities. This is set to ensure the next phase of growth, as well as expand the services available to our customers and their aircraft”. He adds :”RUAG is focusing on a segment of the market that few in the region are capable of supporting, which presented a window of opportunity”.

Building on its MRO strengths in Europe, RUAG, therefore, chose Malaysia as its Asia-Pacific hub as it eyed opportunities in the wider region. This is the policy of the company how claims a strategy of internationalisation in order to maintain proximity to its customer base and to promote growth.