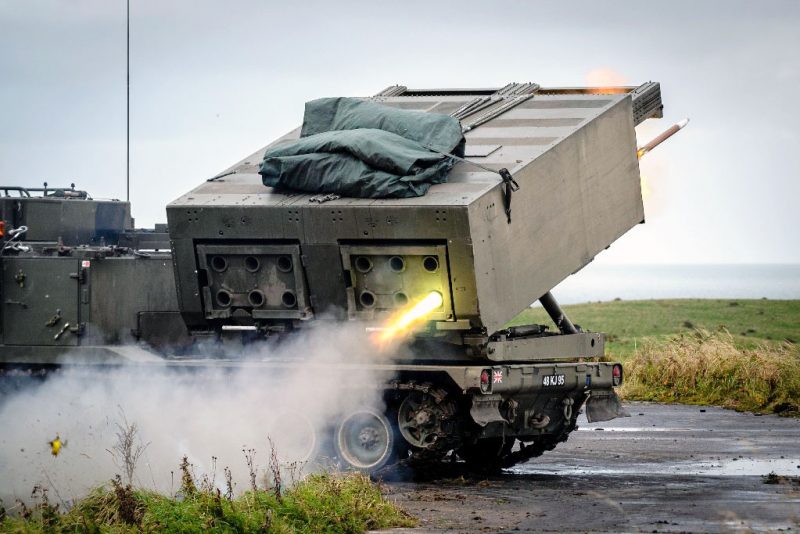 With three main artillery systems in service, the MLRS, the L131 AS-90 155 mm self-propelled howitzer and the 105 mm towed L118 Light Gun, the British Army’s Royal Artillery is made of 18 regiments including training, air defence, surveillance and target acquisition and, of course, indirect fire effectors. Most of the latter are concentrated in the main British Army combat formation, the 3rd UK Division, the two MLRS regiments (one active and one reserve) forming the divisional artillery, the two AS90 regiments supporting respectively the 12th Mechanised and 20th Armoured brigades, five L118 Light Gun regiments providing direct support to other formations. Two other regiments equipped with the same 105 mm guns are respectively supporting the 16th Air Assault Brigade and the 3 Commando Brigade Royal Marines. One of the UK MoD entities that is looking at how to improve the effectiveness of, among others, artillery formations is the Defence Science and Technology Laboratory (DSTL), technology being one of the key elements that will allow British indirect fires to maintain, or perhaps it would be safer saying to regain, an edge over potential peer opponents.
What that laboratory is doing in the artillery field was illustrated at Future Artillery Online, the virtual version of the yearly conference organised by Defence iQ, by Mr. Ricky Hart, Principal Adviser, Land systems (Fires), DSTL.

The DSTL is the scientific arm of the UK MoD and has a £ 703 million turnover with an over 4,400 individuals workforce. Around half of its effort goes to the Chief Scientific Advisors Science and Technology programme, however increasing portions go to Defence Equipment & Support, Front Line Commanders, Strategic Command and others. Around 44% of the work goes to Research, 32% to Requirements and Evaluation, 17% to Specialist Advisor and Services, and 7% to Operational Support.

“The DSTL Indirect Fires team consists of a number of analysts, scientists and engineers providing support and advise to policy makers, contributing to the understanding of the cost-effectiveness balance of fires across the indirect fires domain, supporting the procurement of future systems, as well as the Army’s Integrated Research and Experimentation plan,” Mr. Hart explains.

Improving fires effectiveness must take into consideration various aspects, the first being the British Army policy for future operations: “That policy is driving us to focus on divisional warfighting against a peer enemy, but we still need to support the small and medium deployments as well as a coalition,” he points out. The aim of technology improvements is to maintain the utmost capabilities to support the deployed division and all of its elements, allowing it to maintain operational freedom in order to manoeuvre while defeating the threat by influencing and shaping the battlespace at range. “We need to defeat the threat before they can have an effect, and we must also improve our own survivability,” Hart says.

Land fires elements may be called to operate in a complex, connected, contested, congested and cluttered environment, at distances of hundreds of kilometres. “These operations will be carried out by dispersed formations that will perform multiple missions and tasks, across the spectrum of conflicts, so we need to be able to concentrate at will in times and space to deliver decisive effects when required,” Hart adds. Various solutions are being identified in order to provide the combat force with guaranteed, responsive and persistent effects providing precision fires that can defeat both stationary and moving targets. That said, area weapons that can engage adversaries that cannot be located precisely or who are operating dispersed, and the remote delivery of other capabilities, such as sensors, emitters, and anti-vehicles mines, are also being considered by DSTL. While not forgetting the sensor-to-shooter chain, the Laboratory is also working on force protection: “We need the ability to sense and warn indirect fires attacks, track and interdict any projectile, and positively identify the firing points from which it came, rapidly conducting collateral damage estimates and engaging them with counterbattery fire,” Hart says, underlining that interoperability is key to future operations as an Army must be considered as being part of a joint, interagency, intergovernmental, and multinational force.

To win the counterfires battle, which in the future will be fought exclusively by artillery itself according to Hart, the British Army will have to increase the effectiveness of its platforms, munitions and the efficiency of the kill chain.

The Principal Adviser, Land systems (Fires), DSTL, illustrates the results of a modelling done using the Laboratory MLRS Assessment Simulation (MAS) tool, which provides a “Monte Carlo” simulation of the mission that according to the scientist gives some statistical confidence; this means that the mission scenario is modelled running it a number of times with different random numbers. The simulation proceeds in time slices of five seconds until all the munitions are expended. It can model a number of different types of rockets, area effect, unitary, mines, which can be launched either single or in salvos. The simulation can also model gun munitions. As for targets, these were vehicles operating either stationary or on the move, in line or dispersed, a number of vehicles in a rectangle randomly positioned being the area target. Rocket accuracy was the single variable. “I would like to brief out the trends of these different systems rather than giving any hard evidence of a particular system,” Hart points out.

Five different munitions were considered, area effect, unitary, Sensor Fused Munitions (SFM) with five SFMs per rocket, Terminally Guided Munitions (TGM) with a single munition guided on the target, and Terminally Guided Sub-Munitions (TGSM) with five guided submunitions per rocket. The first target considered was a constrained one, in the form of a column of 10 vehicles moving along a 600 meters-long stretch of straight road. Seven TGSM rockets, thus a total of 35 submunitions, were needed to neutralise the threat, 17 TGMs bringing to the same effect, while over 40 SFMs rockets had to be fired to reach the same result. Area effect rockets could only neutralise the threat rather than defeating it, nearly 40 being needed to reach that result, while unitary warheads did not even came close to neutralisation.

Switching to a dispersed target, 11 vehicles in a 600 x 600 meters rectangle, two types of simulation were carried out, one with poor ISTAR (Intelligence, Surveillance, Target Acquisition, Reconnaissance) and one with good ISTAR. In the former both unitary and area munitions did not even got close to reach neutralisation, while SFMs managed to attain it with slightly less than 30 rockets fired, but remained well under the defeat line. Defeating the threat required the launch of 23 TGMs or 11 TGSMs. The ISTAR quality did not affected much the performances of the last two types of munitions, while it brought back into play SFMs, which managed crossing the defeat line with 53 rockets fired. As for unitary and area effect rockets, with a more precise knowledge of targets emplacement these managed to obtain target neutralisation, using respectively 37 and 53 rockets.

Of course the number of rockets has numerous implications, in terms of cost, logistic footprint, number of launchers needed to achieve the desired result, etc. Mr. Hart expressed his doubts about the persistent availability of good ISTAR over the battlefield, the A2/AD issue coming back into play, “Having ISTAR can give you a dependency that you don’t necessarily really want to rely on, so again it is coming back to that balance we are still struggling with, that in the end will determine what is the great answer,” the DSTL expert says.

Optimising solutions considering cost-effectiveness in the use of ammunition against the various types of targets and missions is the other key element. Not only for cost reasons, budgets are limited compared to the overall needs of modernisation of western armed forces, British ones among those, but also for industrial reasons: the higher the cost of a munition, the lower the number of those acquired in peacetime, but usually also the longer the time needed to produce them as they are more complex; here the stockpile issue comes back overwhelmingly.

While underlining the importance of other factors, such as that of public opinion, “The point is not just about winning wars but it is how we win the wars and how we defeat the enemy,” maintaining public opinion support and influence being a key factor to support the military effort, and after stressing the importance of coalition efforts, as “We are unlikely to conduct high-end conflicts alone, so in my opinion we need to collaborate more widely across governments and industries,” Mr. Hart gave a brief overview on what DSTL is doing in the Research and Development field.

Of course not many details surfaced, however it was possible to understand current trends; “Over the last few years we have been working fairly close with industry through the UK Weapons Science and Technology Centre to develop a number of concepts covering both missiles and guns.”
A number of concepts classes in range brackets were generated, 50 km, 150 km, 300 km, 499 km, the last being under the 500 km mark of the INF treaty, analysis were made on Precision Guided Munitions (PGMs), SFMs and TGSMs, as well as on vehicles, containers and lightweight launchers. “We are currently conducting cross-domain capability analysis to look at how to make the force more efficient and more effective. We have been looking at the sensor-to-shooter kill chain, as well at the command and control, to identify where the bottlenecks are and what we can do to remove them. We have looked across ISTAR to be able to provide the best we can in order to achieve the target acquisition capability we need for our weapon systems. We have also looked at deploying remote sensors. And we are looking at the integration of fires with the rest of the force, this study being conducted at a multinational level,” he points out.

DSTL has also started to run a number of missiles and rockets concept demonstrators to achieve different payloads within current as well as new systems; this will allow to do the right technical risk reduction to make these systems affordable concepts in view of any future procurement. The Laboratory is working also on projects aimed at reducing artillery assets vulnerability, as camouflage and dispersion do not offer the same protection they were in the past, considering new sensors and precision munitions. “We have a few active research projects ongoing on, and I just drafted a requirement for a new defensive system against sensor fused munitions that enables to defeat multiple threats, from UAS to munitions, rockets and artillery,” Hart says adding that the aim is to integrate the defensive element with the fires element, so that artillery will be able to defend itself from incoming threats whilst striking at the assigned targets, all within as single command and control chain. 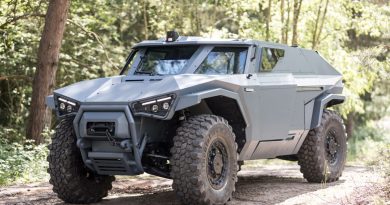