Commenting these results, Frank Le Rebeller, Senior Executive Vice President Finance, Legal and Purchasing, said: “The H1 results for 2019 show a slightly higher than expected operating profit and we have already exceeded our full year order intake target. In addition to the order for a sixth Barracuda submarine, this dynamism is due to a large extent to international orders and in particular to the Dutch/Belgian mine hunters contract and to the Australian design contract. 70% of the order intake is non domestic, highlighting the group’s international growth”.

International orders represented a large percentage of all new orders at 30 June 2019 and are mainly for new ships. The Belgian and the Dutch mine hunters contract and the design contract or the Australian submarine program have been awarded to Naval Group. The French order for a sixth Barracuda submarine also boosted Naval Group orders this half.

First half sales stood at €1.797 billion: 57% new ships and 43% services. The biggest contributors to sales were the Barracuda, FREMM and Brazil programs and maintenance for the Le Téméraire ballistic missile submarine.

Profitability – EBITA and operating profit up

EBITA (earnings before interest, taxes and amortisation) totalled €130.7 million. Operating profit rose again for the fourth consecutive year from 6.8% in the first half of 2018 to 7.3% for the same period in 2019. The group share of net profit is €85.8 million for the half year to be compared to 104.6 million for H1 2018 which benefitted from one-off impacts.

In the second half of 2019 Naval Group will keep on improving the competitiveness of its products offering as well as mastering its ongoing programs through on time, costs and quality deliveries. Operating profitability is therefore expected to increase through 2019 along with the group’s share of net profit that should grow by 5% as compared to 2018.

These financial results are delivered in the context of strengthened naval defence cooperation between Naval Group and its Italian partner Fincantieri, with a project to develop a more efficient and competitive European naval construction industry. 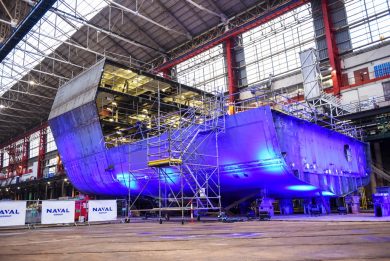