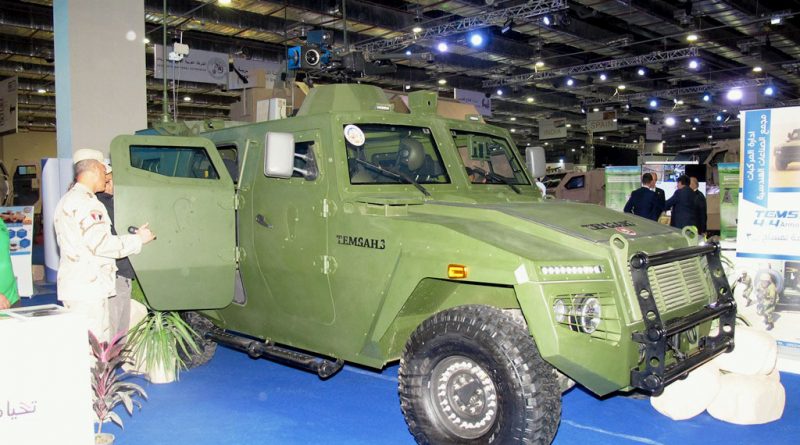 As many other Middle East nations, also Egypt is aiming at developing a national defence industry capable to produce original systems. Among them the Vehicle Department of the Engineering Industrial Complex, which has already produced three vehicles already in service with Egyptian forces, the Temsah-1, Temsah-2 and Light Temsah, temsah standing for crocodile in Egyptian language. 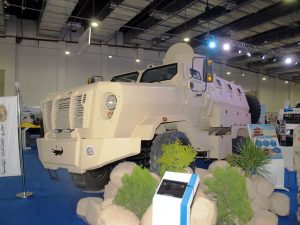 The Temsah-1 is a 13.3 tons 4×4 vehicle with a 2.2 tons payload, powered by a 230 hp turbo diesel engine, that can reach a maximum speed of 80 km/h, endurance being 600 km. It can host a two-man crew and six dismounts, the survival cell providing a BR7 protection level, while mine protection is declared at STANAG Level 4, although it is not specified if under wheel or under belly; minimum ground clearance is 400 mm, while anti-blast seats can be installed as option. All occupants can fire their individual weapon through a gun port, the crew ones being in the side doors, while those for the infantry in the back are in the sidewalls. A protected gun mount can be installed on the roof, while three day cameras and a night one are installed for all round surveillance, the images being shown on a 9” display installed in the crew compartment. 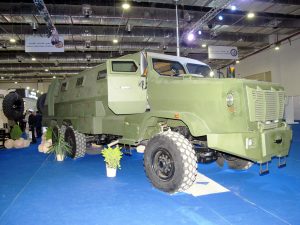 Leveraging the work done on the Temsah-1, the company developed the Temsah-2, which is in fact a stretched version of the previous, maintaining unchanged most technical data except for the engine output, increased to 240 hp, the weight, GVW becoming 16.475 tons with 2.675 tons payload, and the crew, the vehicle carrying two more dismounts, adding thus two weapon ports in the rear compartment. Both vehicles are in service with the Army. The same applies to the Light Temsah, a 3.2 tons vehicle with a 500 kg payload hosting a crew of two plus three other military in a BR6 protected cell, featuring only three gun ports; no indication is given on mine protection, the 235 mm ground clearance indicating that this vehicle should not be designed to operate in mine-risky areas. The vehicle is powered by a gasoline engine providing 228 hp, which gives it a considerable power-to-weight ration allowing a maximum speed of 165 km/h. 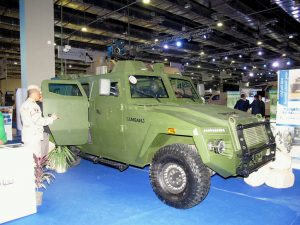 Unveiled at EDEX was the Temsah-3, a 4×4 with a GVW of 6.4 tons and a 1.4 tons payload, based on an HMMWV chassis powered by a 205 hp 6.5 litres turbo diesel engine, allowing a 110 km/h maximum speed, range being in excess of 440 km. The Temsah-3 can host a two-man crew and four dismounts, all of them having a gun port at their disposal in the side of the vehicle, one more being available at the back. Compared to the Light Temsah, the Temsah-3 has a ground clearance equal to that of the heavier vehicles, the option for energy absorbing seats being mentioned although no data on mine protection level are provided. A 360° rotating turret can be installed, one extra day camera being added compared to those of the Temsah-1 and 2. The company is promoting its new product on the international market, awaiting also an order from its national customer. 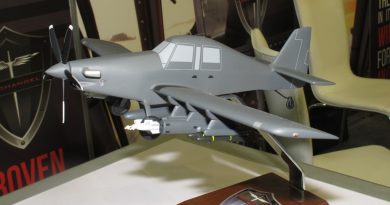 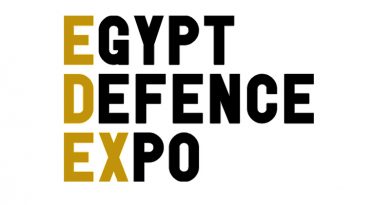