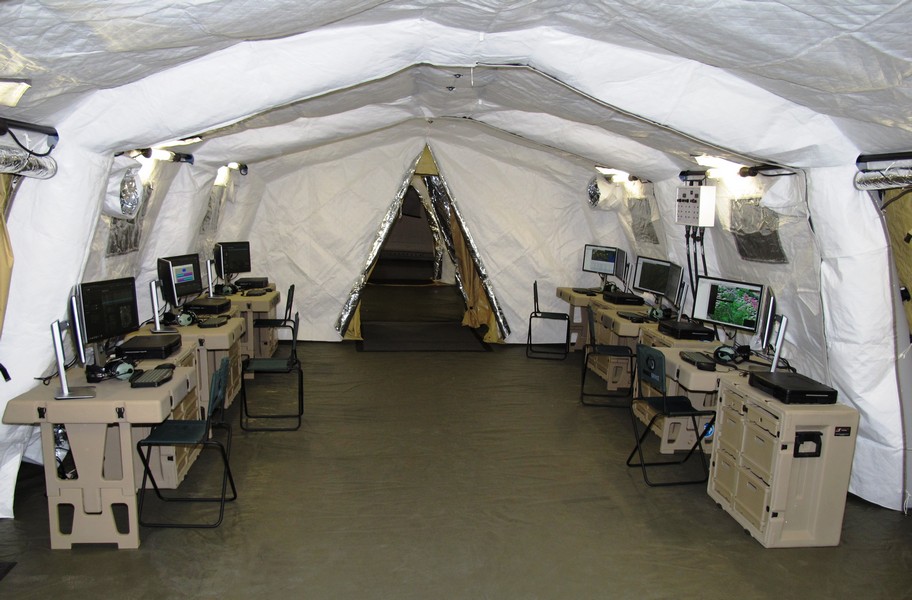 The large TGGS tent houses eight workstations. The facility can be deployed by C-130 and can be rigged up rapidly. (© P. Valpolini)

A major step forward in the Nato Allied Ground Surveillance (AGS) programme was made last 3 December when Selex ES unveiled three elements that bring the system near completion. At a ceremony held at its Torino Caselle facilities, Finmeccanica showed for the first time its WBDL (Wide Band Data Link) and TGGS (Transportable General Ground Station). The third element is the MOS (Mission Operation Support), which is based at Sigonella, the Nato AGS Operations Centre based in Sicily.

Following well over a decade of discussions, the AGS programme was started in 2012 under Northrop Grumman industrial leadership, with Selex ES, Airbus D&S and Kongsberg as major participants, with 60 months to complete the job.Selex ES leads a cluster of companies that include Uti and Elettra Communications of Rumania and Bianor and Techno Logica of Bulgaria, the overall Selex ES share being around 130 million. However, as stated by Fabrizio Giulianini, Selex ES CEO, the company will have further business opportunities in the future when MOS and field logistic support contracts will be discussed.

The AGS is based on the Global Hawk drone, and is pretty close to the Block 40 configuration. Its deployment in Sicily will allow Nato to ensure ground and maritime surveillance of a critical area from the main base, though the system is obviously deployable worldwide. So far Nato had the capability of monitoring the skies thanks to its Awacs fleet headquartered at Geilenkirchen; with the AGS, as stated by Maj.Gen. Stefano Salamida, head of the Italian Air Force Logistic Division, the Alliance will finally be capable to survey the Earth’s surface with its own assets, without the need to ask for national assets. The endurance and operational level of the aircraft chosen, and the uninhabited solution, ensure maximum persistence over an area, while radar sensors provide an all-weather day/night capability. 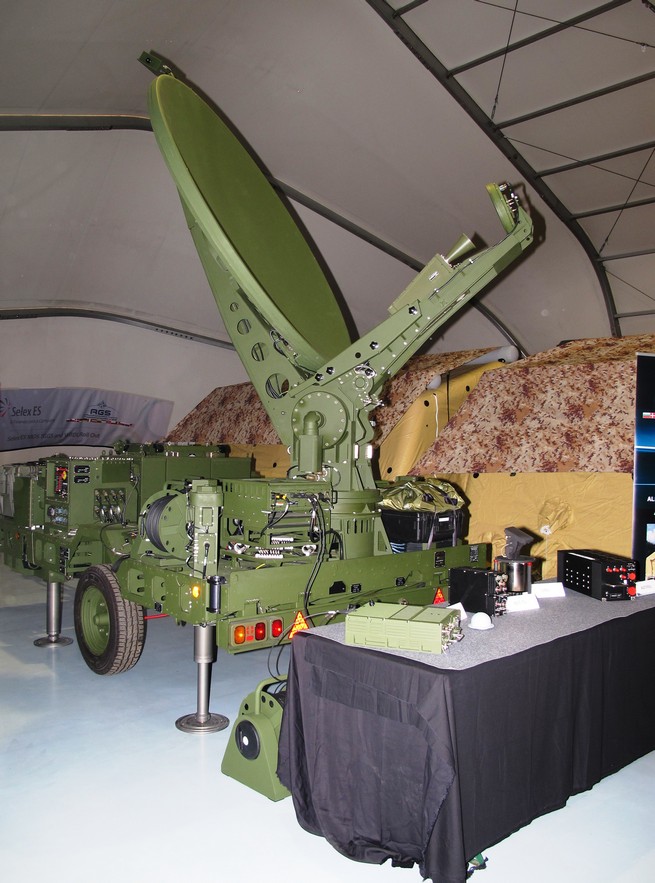 The Torino ceremony, which was held about a month after the successful critical design review, was attended by the programme manager who presented the roadmap for the nexts months. “The first aircraft,” which was rolled out in June 2015, “will fly within two or three weeks,” Erlin Wang. The other four aircraft should follow at a steady pace. All the AGS components should be moved to Sigonella around mid-2016 to start integration and end-to-end tests. This means that by then the first aircraft will perform its transatlantic ferry flight to reach its new home base. As underlined by Jim Edge, these tests will need the availability of all the players, from the final customer (Shape) to all agencies involved, and obviously the industry. A noteworthy point, all aircraft will have Italian markings and airworthiness certificate that will allow AGS aircraft to fly in non-segregated areas is Armaereo’s responsibility (Italian MoD Air Armaments General Directorate). Moreover, Italy is also responsible of the Sigonella infrastructure. An interim facility based on prefabricated modules has been delivered, but a definitive infrastructure is expected in the coming years as it is often easier to write million of line codes rather than defeating bureaucracy. Thr overall the Nato AGS manpower will total around 600 personnel, but the number of people based at Sigonella will be usually higher as around 100 trainees will be around most of the time.

Although only partly visible at Torino on computer screens, the Mission Operation Support is definitely the core of the system as it will allow the exploitation and analysis of the images obtained by the sensors. Selex’s system is made of thee clusters of 11 workstations each. One of those will be used solely for training, although it may also be used as a back-up. The other two will be used for operations, possibly one for each of the orbits. Selex ES and its subcontractors developed the Mission Operation Support software which consists of over two million line codes. This software is also installed on the transportable version of the MOS, the TGGS. 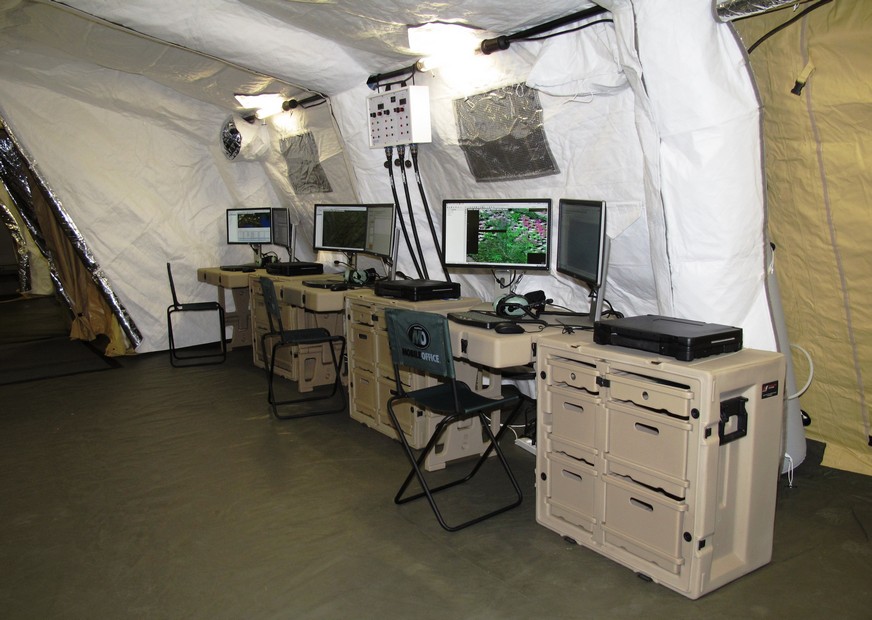 The TGGS consoles and the Mission Operation Support at Sigonella run on the same software. (© P. Valpolini)

The Transportable General Ground Station is hosted in a logistic container and can be quickly rigged in the field after having been deployed by air on a C-130-class aircraft. It allows one to control one orbit and hosts eight workstations (three less than an MOS cluster) installed as they are in a large tent (a smaller one hosting the servers) all housed in tempest-proof cases. The system is complemented by technical support elements such as power supply and air conditioning systems. There also are truck-mounted mobile stations known as MGGS (Mobile General Ground Stations). These are from Airbus D&S, the first having been rolled-out in March 2015, the same company also providing the software. To ensure a smooth transition of operators within the different operating systems, a man-machine interface was developed to strict requirements. Selex ES will deliver two fully equipped TGGS to prime contractor Northrop Grumman.

Providing a secure and consistent flow of data between the air and the ground segments is the role of the Wide Band Data Link (WBDL). Of course Nato Global Hawks are fitted with satcom links, however the WBDL is the one that secures the main stream of information when the aircraft is in line of sight with the ground element. This subsystem is in charge only of the flow of data generated by the on-board sensors, but can also be used also during take-off and landing operations. The main ground element is the antenna, which is fitted on a purpose-designed trailer that contains among other ancillaries six optical fibre reels each with 500 metres of cable. The structure guarantees minimal  oscillations up to 100 km/h wind to ensure maximum throughput (the data is classified) in bad weather. The other ground element of the link is its System Interface Unit (SIU), which installed in all ground stations including the MGGS; itactually is the ground segment of the crypto chain. Selex ES also provides the airborne components of the link, nmel two antennae, the Steerable Antenna Unit (SAU) acquired from CPJ and the Omnidirectional Antenna Unit from Cobham. The other on-board elements are the Airborne Data Terminal-Front End Unit (an amplifier which, used in conjunction with the steerable antenna, ensures the maximum range of around 300 km) and the Airborne Data Terminal-Terminal Unit (a transceiver that also incorporates the miniaturised crypto element, which is the on-board equivalent of the SIU). In the current configuration the transceiver can deal with information at to Nato-Restricted level. Selex ES will provide ten ground kits, antennae and SIU, plus two spares, and will produce eight WBDL air segment kits plus two spares.

Developed by Kongsberg, the System Master Archive and Retrieving Facility, or SMARF, is the memory element and is based in Sigonella. Not much is known about the amount of data that it can store, both in raw and processed forms. What is certain is that this data base will be available to all Nato nations at any time, while the AGS aircraft will have to be deployed following procedures similar to those established for the use of the Alliance Awacs assets. According to officials met in Turin, Nato is planning to create a back-up SMARF, but no contract has been issued to date (it might come as a follow-on contract or as a wholly new contract), and the location of the facility is still to be decided.