By David Oliver in Colombia

The new organising partnership of Mindefensa, Corferias and Coges made Colombia’s international defence and security trade fair, Expodefensa 2015 a success. Having grown from 170 exhibitors in 2014 to 232 this year with the move of the exhibition to Bogota’s new Corferias Pavilion, the high quality of the stands and the important number of Colombian and foreign official delegations contributed to its success. The three-day Expodefensa 2015 closed its doors at the Corferias exhibition Center after the participation of more than 9,000 national and international visitors. The fifth Expodefensa exhibition welcomed more than 100 delegates belonging to 55 official delegations from 27 countries, and 86 Colombian VIPs who included the defense and security ministers and deputy ministers, and the commander-in-chiefs of the army, air force, navy and police force, and other authorities.

A total of 232 exhibitors from 26 countries attended the trade faire, 34 percent of which were from Colombia and 66 percent from overseas countries, who presented innovations in the domains of public safety and security, personal equipment, weapons, simulators, intervention craft, information systems and communication, ammunition and explosives, among others.

During the three-day official programme, international conferences were organized, highlighting such topics as cyber security, cyber defense and technology transfer. Visitors had also the opportunity to familiarize themselves with issues related to the development of new technological strategies regarding protection and security, where important national and international experts of the sectors gathered.

Expodefensa 2015, managed to deliver significant progress in meeting its target to turn this event into the major hub of defense and Security for the entire Latin America and the Caribbean region.

Apart from a significant presence of the Colombian armed forces, its leading shipbuilding and aviation industries were represented by Cotecmar and CIAC respectively. Cotecmar specializes in the design, construction, maintenance and repair of naval vessels ranging from river patrol boats to landing craft utilities (LTU) and offshore patrol vessels (OPV). Two of its OPV-80s have been delivered to the Colombian Navy and have since been deployed to Antarctica, and the Horn of Africa as part of the EU Naval Force’s Operation Atalanta. A third OPV-80 is nearing completion at Cotecmar’s Cartagena shipyard.

CIAC is involved in the manufacture of aircraft ranging from the T-90 Calima basic trainer to the Iris unmanned aerial vehicle (UAV), and maintenance and modernization of aircraft and components. It also undertakes Level III inspections of the UH-60 Black Hawk helicopter that is operated by the Colombian Army, Air Force and National Police Force. CIAC also partnered Sikorsky with the construction and operation of Black Hawk Helicopter Flight Simulator Training Center at the Colombian Air Force Base in Melgar, the first of its kind in South America.

As one of the organizing partners, Coges, the subsidiary of the French Land and AirLand Defence and Security industries Association GICAT, attracted some 18 companies to the French Pavilion at Expodefensa 2015. These included MBDA who highlighted its Sea Ceptor all weather air defence weapon system aimed at the Colombian Navy requirement for its future frigate programme, the Exocet family of missiles and displayed models of the MEADS launcher and vehicle-mounted Mistral air defence system.

Renault Trucks Defense displayed its MIDS vehicle especially designed for public order and internal security missions at Expodefensa. Based on the Renault Midlum civil vehicle chassis, the MIDS offer a high degree of armored protection for its two crew and up to 10 personnel. Three MIDS in a 4×4 configuration have been delivered to the Colombian Police Force.

Among the companies in the French Pavilion at Expodefensa 2015 was the operational logistics company Losberger Rapid Deployment Systems that manufactures a range of semi-permanent modular shelters and aircraft hangars, lightweight inflatable or metal frame tents, and fuel bladders, 70 percent of which are exported. It was confident of adding Colombia to its export customers.

Musthane markets a helicopter landing mat range of support products to military customers. At Expodefensa 2015, it introduced its new Mustmove helicopter landing mat made of double ply rubber coated fabrics reinforced with composite material. Lightweight and easily rolled up it is 100 percent impermeable to dust and wind, easy to clean and repair, the helipad offers protection against brownout and FOD and can be quickly installed for a safe landing zone for any type of helicopter or rotary-wing UAV. The company markets beach access mats and aircraft or vehicle recovery trackways of the same materials.

Gavap Engineering France, a RUAG Group company based in Terssac, specialises in training solutions and displayed its virtual simulator range including its SITTAL NG2 for small arms firing, the SOTA system for artillery forward observers and the STES VBCI for armoured vehicle driving and firing. It also produces laser instrumented simulators and live fire range equipment for small arms and anti-tank weapons.

Defense Conseil International (DCI) is an international service company, created to export French know-how about defense and security to foreign partners. Its four divisions, COFRAS dealing with land forces, national police forces and the health defense service, NAVFCO, the French Navy, AIRCO dealing with the French Air Force, and DESCO deals with securing defence and security programmes. At Expodefensa, DCI highlighted Helidax where DCI is partnered with INAER to provide helicopter pilot training for the French armed Forces and overseas students at the EALAT flight school at Dax, and Luc-en Provence. DCI announced in October that Helidax had crossed the 100,000 flight hours of training at Dax in five years.

Another major European exhibitor at Expodefensa was the Saab Group which has a proven track record in providing military solutions to customers in Latin America, in fighter aircraft, airborne early warning, ground combat, training and simulation, surface-based radars, and electronic warfare.

Saab’s broad portfolio of reliable, cost-efficient and high technology products and systems for air, land and sea were showcased at Expodefensa. These included Erieye, the airborne early warning system for long-range surveillance and control which monitors airspace, borders and sea lanes to provide national security and assist in law-enforcement missions such as anti-smuggling, anti-piracy and protection of national resources.

The RBS 70 NG is a very short-range air defence missile system providing protection from 250 m out to 9 km for ground forces against airborne threats. The system is portable, easy to set up and operate, and provides 24-hour coverage in all climates. Saab’s short-to medium-range ground based air defence missile system, BAMSE is designed to operate independently or in coordination with a complete defence network.

Saab also focused on the Colombian Air Force’s replacement programme for its ageing Kfir combat aircraft. With Gripen, the multi-role fighter capable of undertaking the full range of air-to-air and air-to-ground missions, including specialist roles such as intelligence, surveillance, target acquisition and reconnaissance and electronic warfare, sold to Brazil, Saab is confident that it would be an ideal Kfir replacement. However, it facing tough competition from the Eurofighter Typhoon, and the frontrunner, the Lockheed Martin F-16.

With Expodefensa attracting more than 50 European exhibitors, the organisers are hoping that it will prove to be a springboard for competing with Chile’s FIDAE and Brazil’s LAAD to be the leading defence and security trade fair in Latin America. 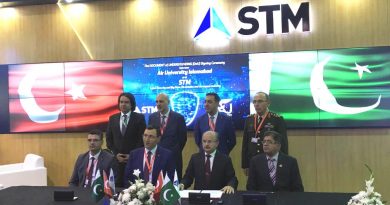 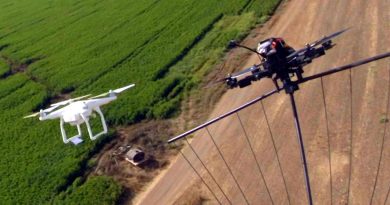 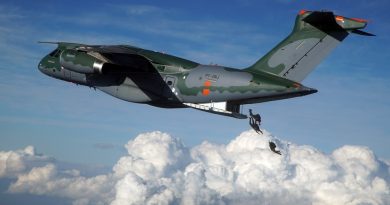