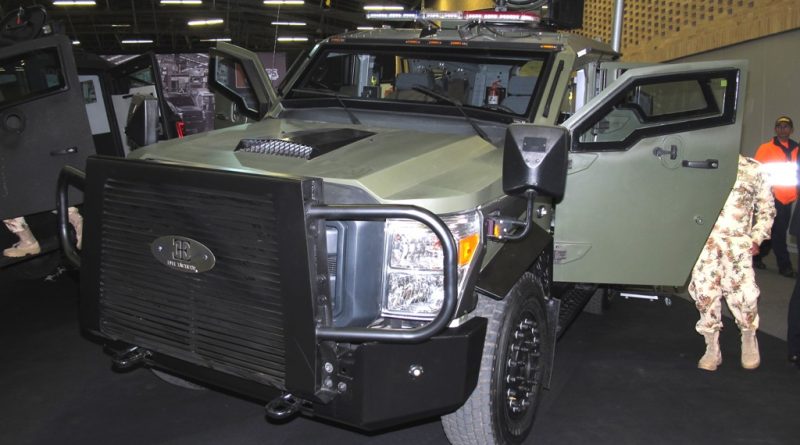 EPEL Tácticos of Mexico and TPS Armoring of the USA, both involved in the development and manufacturing of armoured vehicles, decided to cooperate for proposing their products on the international market. In the inside stand the two companies exhibited the Epel TPV and the new Black Mamba QRV. The latter is a quick reaction vehicle produced in different levels of protection, the basic version being at B6+ or STANAG 1; a 5.6 t vehicle with a 1.32 t payload, it is built over a Ford 250 chassis powered by a 330 hp engine, and can carry up to seven passengers. A rear flatbed allows for some transport capability. 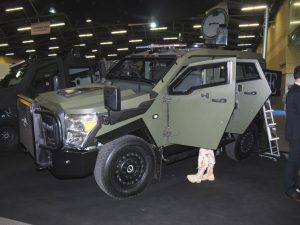 The vehicle is available also in APC version, on two protection levels, STANAG 1 and STANAG 2, GVW being respectively 8.5 and 13.6 t, both carrying up to 10 people. EPEL Tacticos leverages the experience acquired with the production of some 150 SandCat TPV, the vehicle designed by Plasan of Israel, of which over 400 are in service with the Mexican Army; the SandCat TPV saved numerous lives in some incidents occurred along the Mexican borders, and are regularly used in operations against narcos.

On the outside area Epel exhibited its Karnaf (Rhino) a monocoque cross-country vehicle with independent suspensions, capable of dealing with 100% front slopes and 60% side slopes, reaching a maximum speed of 120 km/h. 4.95 meters long, 2.13 wide and 2.08 high, it has a curb weight of 2.92 t without armour, and a 1.6 t payload. It can be fitted with add-on protection, Level 1 and Level 2 kits being available, payload being reduced to 290 kg with the maximum protection level. Wheels are located at the vehicle extremities, providing an 82° angle of approach and an 80° angle of exit. The 430 hp Chevrolet gasoline engine versus the 4.23 t GVW shows well the priority given to mobility, the vehicle being definitely overpowered to allow it to operate at ease in difficult terrain. 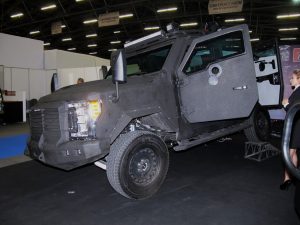 The Karnaf can carry five passengers, two at the front and three in the rear, protected by an integral roll-bar. At Expodefensa it was exhibited with a pedestal-mounted four-missiles launcher installed on the rear platform, and with a pintle mount for a 12.7 mm machine gun mounted over the roll-bar. The Mexican-US team considers that Colombia having many operational similarities with Mexico, its vehicles are tailored to the local situation, while it is also widening its export scope to the Middle East and Africa.