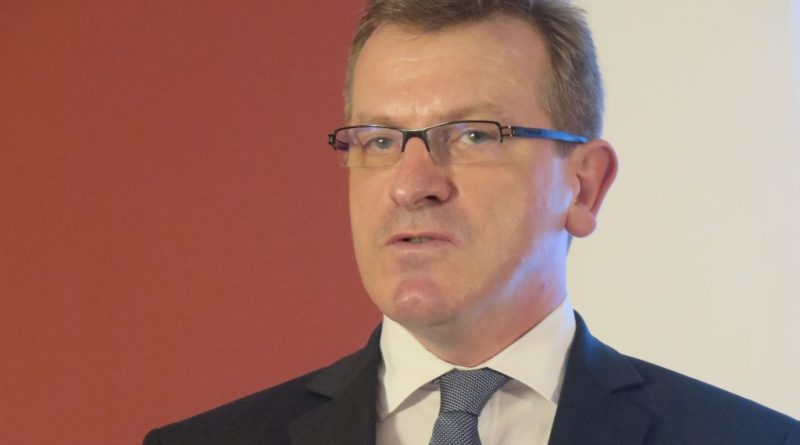 Let’s jump in! At the first ever Arquus press conference on Thursday, March 24, 2018 at the Hotel Saint James in Paris’ posh XVIth arrondissement, Emmanuel Levacher, CEO of Renault Trucks Defense, announced the new name of the company  which now has become “ARQUUS”.

Levacher explained that this new name originates from the Latin roots of Arma Equus, where Equus is the horse which provides battlefield mobility to the soldier. Arquus thus refers to the mobility as well as the agility which modern mounts must offer to the armed forces, and to the protection needed against all projectiles, bursts and all kinds of improvised devices which threaten the soldier on the battlefied.

Will Arquus augur a good start for RTD with this new name, despite a 2017 not truly successful year business-wise? All trends predict that 2018 will be a better year. Meanwhile Arquus shall recruit 150 new employees to develop its skills in the long term.

Responding to journalists’ questions, Levacher remains confident in the future of his group and expects a net growth in turnover, which should rise from € 550 million in 2017 to € 800 million in 2020. The LPM procurement law will largely carry growth to Arquus which is set to provide within 2025 the mobility elements of 936 Griffons and 150 Jaguars, part of the Scorpion programme. The group is also in charge of the production of the remotely controlled weapon stations which will become the main armament of the Griffons and the secondary armament of the Jaguars, as well as all the spare parts needed for the Scorpion programme.

On the other hand Arquus will invest more than € 7 million to develop its Fourchambault production site, and turn it into an ultra-modern logistics platform.

Arquus will also be responsible for other programmes as part of the future LPM, such as the versatile tactical lightweight non-protected vehicle (VLTP NP), which will become the successor of the French Army P4. Levacher added that he hopes that 2018 will be a good year for export. This pending the full implementation of a contract won in Kuwait for the supply of 300 Sherpa armored vehicles, which is worth € 270 million. Arquus is also offering a new version of the Sherpa to the Netherlands Army, which plans to acquire 1,000 tactical protected vehicles in the 11-12 ton range before the end of 2018. In financial terms this deal should be close to that of the VBMR, around € 500 million, including MCO.

Arquus now also relies on the Belgian KAMO (Belgian Scorpion) contract estimated at €1.1 billion (for 60 Jaguars and 417 Griffons). In addition, the VBCI contract in Qatar could inflate the group’s order book by around € 300 million. Beyond these major contracts, Arquus is meanwhile working on several minor contracts in Africa, notably in Senegal (35 vehicles), Ivory Coast (15) and Chad (100) which would reach a consolidated amount of some € 30 to € 40 million.