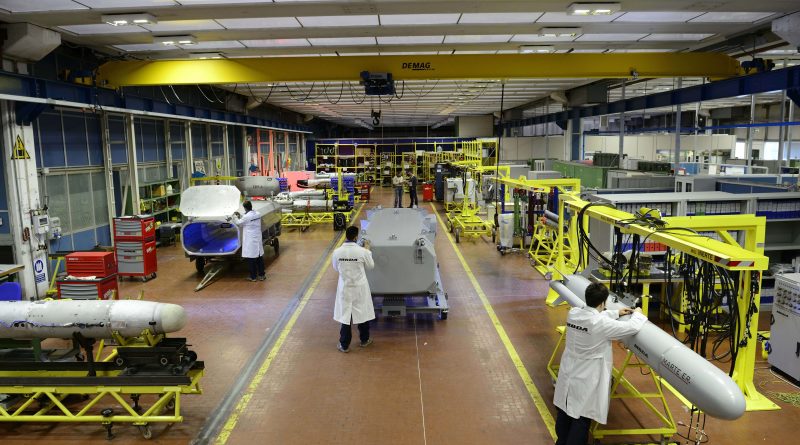 The Italian arm of MBDA is working on the Marte ER intermediate-range anti-ship missile and a new version of Otomat/Teseo weapon system capable to accomplish both long-range anti-ship and land-attack strike missions, which development contract is expected to be awarded within 2018-end. The two new at-different stage programmes are being managed by MBDA’s ASuW weapon system centre of excellence site of La Spezia on the northern-west coast of Italy, which has so far developed, provided and support all the anti-ship and latest surface-to-air missiles for Italian Navy, in addition to export customers.

The centre is also enlarging the perimeter of its activities in the surface-to-air and surface-to-air weapon systems domain, with the addition, in the near future, of the CAMM ER integration and validation line. Moreover, the MBDA’s ASuW centre of excellence works closely and have missiles’ assembly and pyrotechnical facilities within the nearby Italian Navy’s managed Joint Advanced Munitions Centre (CIMA, Centro Interforze Munizionamento Avanzato), responsible for the complete in-service life management and stockade of Italian Navy’s weapon systems, in addition to Italian Armed Forces’ joint missile programmes including the Aster and Aspide. On CIMA site, MBDA provides its support to the multi-national Aster surface-to-air program, which include the assembling and supplying of the front-end section of the missiles and expected work for weapon system developments and upgrades.

The year 2018 will be decisive for the Marte ER program, as the missile full scale development is progressing at la Spezia facility to meet the first live firing milestone within year-end, EDR learned during a recent briefing at the same company site. The Marte ER missile is being developed into the helicopter and ground/naval versions (the latter to be launched by coastal defence batteries and ships) and the fast-jet variant. MBDA received in 2016 a contract from Qatar Emiri Naval Forces to deliver the Marte ER munition for a new multi-layer coastal defence system and more recently during DIMDEX 2018, it has been awarded a separate contract for delivering the helicopter launched version to be used from NHIndustries NFH90 platforms.

In the meantime, MBDA Italia and Leonardo have successfully completed a joint system definition phase programme to assess the missile integration feasibility on the Typhoon platform as main anti-ship munition. Such programme is the first 18 months’ phase of a full-scale programme to integrate the Marte ER on board the Eurofighter Typhoon, becoming the anti-ship weapon system of choice for the European combat platform, MBDA Italian representative confirmed to EDR. These activities were closely followed by Italian Air Force that has expressed interest into the weapon system and is overseeing the programme on behalf of NATO Eurofighter 2000 and Tornado Management Agency (NETMA). MBDA and Leonardo are waiting a weapon integration contract as the MARTE ER has been selected but not yet acquired to become part of the weapon systems package to arm the fleet of Typhoons that are under production by the European consortium for Kuwait Air Force. Other sales opportunities are followed in the Middle East and potentially in Europe.

MBDA is also working on a technology roadmap to further enhance the capabilities of the Marte ER, focusing primarily on a new warhead, man-in-the-loop and dual sensor terminal guidance system. These technologies are being shared alongside other advanced activities with the programme for the development and production of a new version of the Otomat/Teseo antiship missile for the Italian Navy and potentially export customers. Italian Navy’s Teseo munitions operational life is expected to expire within 2022 without life extension activities which are being looked at to bridge the gap until the new version will be available.

MBDA is supporting the Italian Navy in the studies to define and develop a new generation of the current missile with substantial operational enhancements centred on an extended range, higher lethality, mission control and terminal survivability, in order to satisfy both long-range anti-ship and land strike missions. MBDA Italia hasn’t released drawings or performance details but the so-called Teseo Mk2E (E stands for Evolved) is foreseen to feature a new propulsion system based on a Williams turbofan and new fuel system in order to double the current missile range of 180+ km, a new more powerful warhead and mission control, and advanced terminal guidance based on a bi-directional data link and dual-mode (RF and IIR) seeker. The feasibility study is converging into a system definition and development contract aimed to be awarded within 2018-end.

The MBDA Italia’s La Spezia centre is also enlarging the basket of its surface-to-air missile activities, with the setting up of the assembly and integration line of the CAMM ER missile, which programme has already allocated funding but no contract yet due to Italian Government pre- and post-elections restricted activities periods. The missile and launcher development and integration programme with in-service Italian Army and Air Force air defence systems to provide prototypes to be evaluated and awarded the series-production phase is expected to be awarded within year-end. The latter contract is also to include a preliminary study to potentially integrate the CAMM ER on new Italian Navy’s ships in the future. The same site is also preparing itself to manage (thanks to its facilities within the Italian Navy’s Joint Advanced Ammunitions Centre), the mid-life refurbishment activities being planned for the Italian air force’s Storm Shadow cruise missiles, which are expected to be awarded within the year-end. Follow-on articles will provide more details about the MBDA’s La Spezia latest developments.