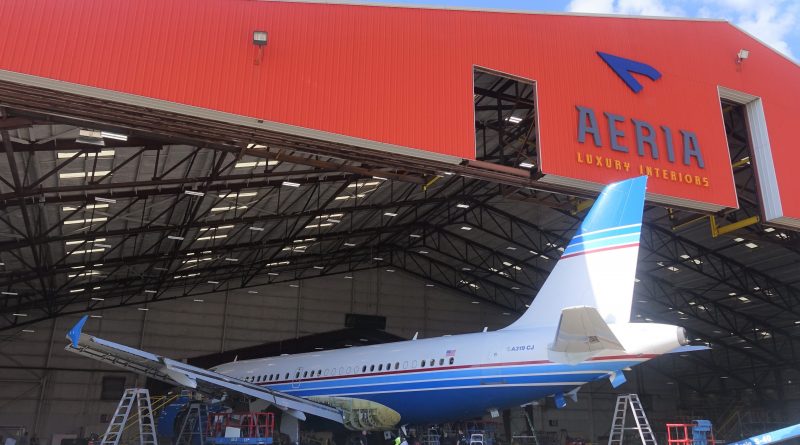 Singapore, 28 May 2018 – ST Aerospace’s VIP Completion arm, AERIA Luxury Interiors (AERIA) secured its first Airbus Corporate Jet (ACJ) customer when it was awarded a 12-year maintenance support contract for its first ACJ, an A319. Under the agreement, AERIA will carry out heavy maintenance works that include interior and auxiliary fuel tank removal/replacement.

While AERIA has built up a strong record since 2014 in servicing and performing VIP modification and completions on Boeing platforms, the A319 is the first ACJ that the company is supporting at its facility located in San Antonio, Texas, USA. This milestone project allows AERIA to showcase its capability and knowledge base in Airbus platforms to potential ACJ customers looking for customised VIP interior solutions.

Ron Soret, Vice President/General Manager of AERIA, said, “We have at AERIA a team of experienced mechanics and technician veterans who can provide the highest level of service and support across various platforms. We are hence confident in redelivering to the satisfaction of our first customer for Airbus aircraft heavy maintenance, and we look forward to supporting more ACJ customers in their maintenance, modification and completion needs.”

AERIA has performed various maintenance checks for over 20 Boeing aircraft since June 2013.  In addition to maintenance services, AERIA offers VIP modification and completion on Boeing and Airbus aircraft and is an approved Boeing Completions Centre.  The San Antonio facility can house two widebody or three narrowbody aircraft at any one time, with its latest VIP completion programme slated to begin early next month.