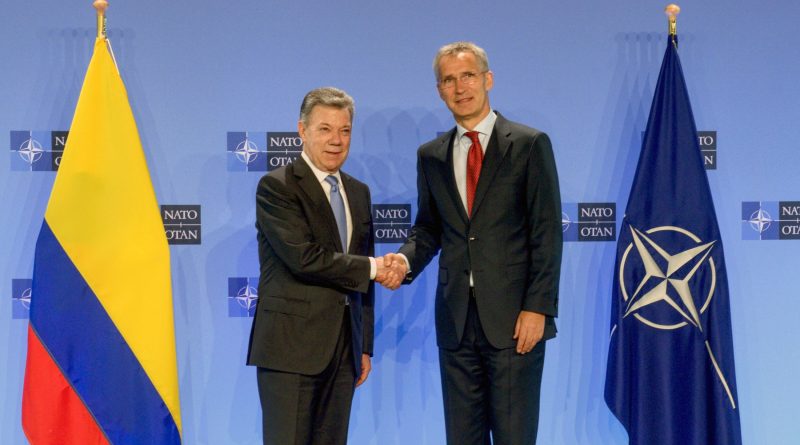 in Brussels on the final day of May 2018 Colombian president Juan Manuel Santos paid an official visit to NATO Headquarters where he was met by Jens Stoltenberg. NATO and Colombia have concluded a partnership agreement with a view to strengthening dialogue and cooperation to address shared security challenges. Despite geographical distance, cooperation has been developing progressively since 2013 in a number of areas including military education and training, maritime security, good governance and building integrity.

Colombia is one of a range of countries beyond the Euro-Atlantic area – often referred to as “partners across the globe” – with which NATO is developing relations.

Let’s recall that on 18 May 2017, NATO and Colombia agreed on an Individual Partnership and Cooperation Programme setting out priority areas for dialogue and cooperation. The objectives of the partnership are to develop common approaches to global security challenges such as cyber security, maritime security, and terrorism and its links to organised crime; to support peace and security efforts including human security, with a particular focus on protecting civilians and children, and promoting the role of women in peace and security; and to build the capacities and capabilities of the Colombian armed forces.

Practical cooperation has been developing in specific areas in recent years. Since January 2013, the Ministry of Defence of Colombia, Luis Carlos Villegas Echeverri, has been actively participating in the Building Integrity Initiative, through which NATO works to support Allies and partner countries to promote and implement the principles of integrity, transparency and accountability in defence institutions.

In the area of defence education and training, Colombian personnel have taken part in a number of courses at the NATO School in Oberammergau, Germany, and the NATO Defense College in Rome, Italy, since 2013. Colombia has also participated in a number of high-level military conferences.

In 2015, Colombia supported NATO’s maritime operation to counter piracy off the Horn of Africa, with a vessel. Looking ahead, NATO could provide expert advice focused on developing the interoperability of the Colombian armed forces with those of NATO Allies, in line with NATO norms and standards. This will facilitate possible future Colombian participation in United Nations-led operations and missions. Colombia also has a lot of expertise to offer in the areas of counter-insurgency, counter-narcotics and in countering improvised explosive devices.

In response to Colombia’s interest, the NATO Allies agreed in 2013 to progressively develop cooperation in areas of common interest. An Agreement on the Security of Information was also signed to facilitate this cooperation.

Building on the experience gained over three years of cooperation, discussions started in December 2016 on developing an Individual Partnership and Cooperation Programme to set out priority areas for dialogue and cooperation. This programme was agreed upon by NATO Allies and the government of Colombia just one year ago on 18 May 2017, formalising the recognition of Colombia as NATO’s latest partner and opening access to the full range of cooperative activities NATO offers to partners.