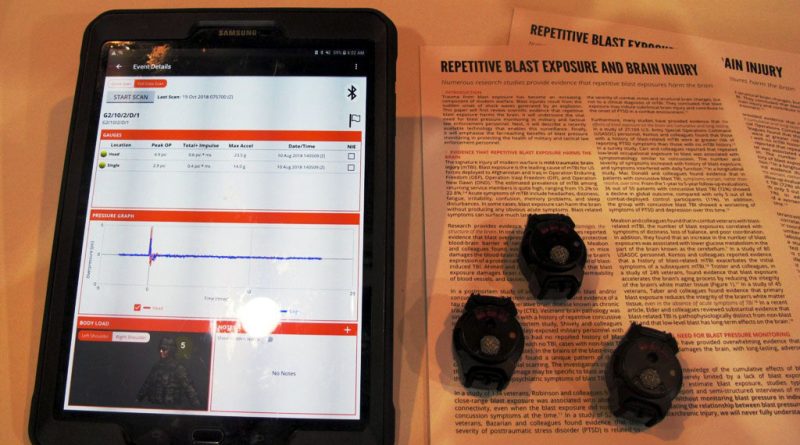 Two years ago BlackBox Biometrics introduced in Prague the latest evolution of its Blast Gauge blast pressure measuring system aimed at recording shock waves that might affect the soldier’s brain. The development of such system seemed pretty related to IED incidents suffered by US soldiers downrange, mostly in Iraq and Afghanistan, medical researches having shown how much repetitive blast exposure can cause brain injuries. Defined mild traumatic brain injuries (mTBI), studies show that between 15.2% and 22.8% (depending on sources) of US soldiers engaged in Operation Enduring Freedom, Operation Iraqi Freedom and Operation New Dawn, in Afghanistan and Iraq, were hit by mTBI symptoms that include headaches, dizziness, fatigue, irritability, confusion, memory problems and sleep disturbances. A link between mTBI and post –traumatic stress disorder (PTSD) were also evidenced.

The Blast Gauge comes in the form of a small and light wristwatch-like sensor designed to be easily fitted to helmet straps or to the soldier’s harness, on the shoulder or chest. At a weight of only 140 grams, its battery lasts over one year and data recorded can be automatically downloaded to via Bluetooth on a mobile app, compatible with both iOS and Android handhelds, as well as on PCs. The Blast Gauge is fully in service with the US Army; the wider deployment of the system allowed to find that most of mTBIs do not occur downrange but during training, only 25% of the blast-related injuries coming from operations. A typical situation is when a mortar crewmember does not bend enough during the firing action, is or her head remaining higher than the mortar tube muzzle, the shockwave thus strongly hitting the head area. Such behaviour can be immediately spotted thanks to the Bluetooth connection, allowing the commander to take action and improving training. Another dangerous blast generator is the 12.7 mm machine gun when used on a pintle mount. Blast Gauge sensors can also used to measure shockwaves during dry rehearsals of an action, i.e. when mopping-up a building, verifying the danger areas when using small arms and/or flash-bang grenades in enclosed space, in order to accurately plan the action trying as much as possible to deploy personnel in high overpressure areas, thus minimising mTBIs. In case of trauma, it supports medics in their action.

Following the results obtained in the United States, some European countries are closely considering the adoption of the system developed by BlackBox Biometrics. In fact numerous parameters are already monitored, physical training scores, marksmanship, weight, health, radiation dose, hearing, lead exposure, radiations, shock wave having been considered only in recent times. The US is leading the NATO Human Factors and Medicine HFM-270 panel, titled “Framework for Modelling and Simulation of Human Lethality, Injury, and Impairment from Blast-Related Threats” that aims at developing a framework for translating scientific information into the capability to model the mechanisms of human lethality, injury, and impairment across the spectrum of blast-related threats. Work started in 2016 and will end in 2019. Work is also underway with the NATO Army Armament Group (NAAG) Land Capability Group Dismounted Soldier Systems (LCG DS) as well as with the NATO Centre of Excellence for Military Medicine (MILMED COE). In Europe the Netherlands seem to be the nation which is the closest to start a monitoring scheme for mTBIs, France having also shown considerable interest in the system.