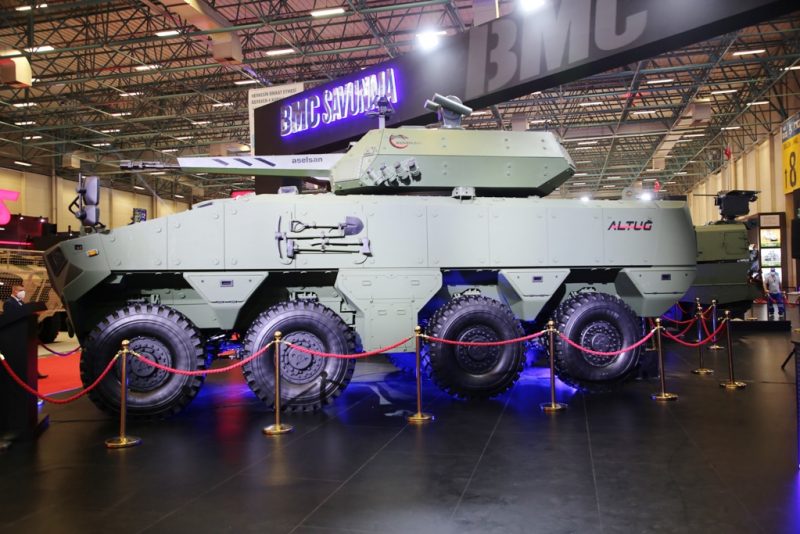 A totally new 8×8 was unveiled at IDEF 2021 by BMC, the company aiming at the Turkish Land Forces New Generation combat vehicles programme. The Altuğ in the infantry fighting vehicle version is a pretty impressive vehicle, its height over chassis being 2.5 meters while the height over the turret is 4.38 meters, to which we must add the height of the independent panoramic sight and of other sensors. EDR On-Line spoke to Orçun Eser, the programme Engineering Manager.

The company does not give a direct figure of its weight, however considering the power installed and the over 20 hp/t power-to-weight ratio it is easy to find that its GVW is over 35 tonnes. According to BMC this weight includes a Level 4 protection on the Aselsan’s Korhan 35 mm turret installed on the IFV. The turret was fully integrated, including its under armour elements such as the control station, based on detailed ergonomic studies carried out by the company. The Altuğ overall length is 8.33 meters, which includes unarmoured boxes at the rear that can be removed, bringing the vehicle length at 8 meters. The all steering axles allow to keep the turning radius at around 8 meters. The Altuğ is fitted with independent hydro-pneumatic suspensions which in the prototype have a fixed setting, a height adjustment system being proposed as option.

At IDEF 2021 BMC exhibited two versions, the aforementioned IFV and the Armoured Personnel Carrier variant, which is armed with a dual weapon station produced by BMC itself, the company also producing the laser detection system, the RC-IED jammer and the acoustic detection system installed on the vehicle. To show the flexibility of its vehicle, the two versions were fitted with different powerpacks.

The IFV was powered by a Caterpillar C13 diesel engine providing 711 hp coupled to an Allison 4000 Series transmission with six forward and one reverse gears, while the APC vehicle was fitted with a BMC Power 600 hp diesel engine that allows maintaining the same power to weight ratio, the GVW of the APC version being under 31 tonnes. Another difference was in the tires; the BMC chassis can be fitted either with 14R20 or 16R20 pneumatics, and at IDEF the APC was equipped with the smaller wheels while the IFV was featuring the bigger diameter ones. The Altuğ can ford up to 1.2 meters, overcome a 0.7 meters vertical obstacle and a 2.2 meters wide trench, and cope with a 60% slope and a 30% side lope. It can reach 110 km/h and has a range of over 800 km.

The vehicle features a nearly “V” shaped hull for increasing mine resistance, ground clearance being around 450 mm, the hull bottom being however located higher.  No data were provided on protection levels, which follow the TLF stringent requirements, including those against IEDs.

To provide sufficient energy the Altuğ is equipped with a 600 A alternator; however to ensure lower signature when operating in a static position, and to save fuel switching off the main engine, an APU providing 18 Kw for operating the turret, sensors, communication systems as well as the air conditioning system. On the opposite side we find the silenced exhaust system.

With an internal protected volume of over 15 m3, the Altuğ can host up to 12 military, three crew members, driver, commander and gunner, and nine dismounts. According to BMC the chassis can easily withstand a big calibre manned turret, armed with a 105 or 120 mm gun; in that case the turret basket would reduce the available space, that will anyway allow carrying 5-6 dismounts at the back, if required. The Altuğ is fitted with a modular rooftop that allows other variants to be interchangeable.

BMC  getting ready for the round of comparative trials that will bring to the selection of the platform by the TLF, and according to the company the initial batch of vehicles should be split in nearly equal parts among IFVs and APCs.