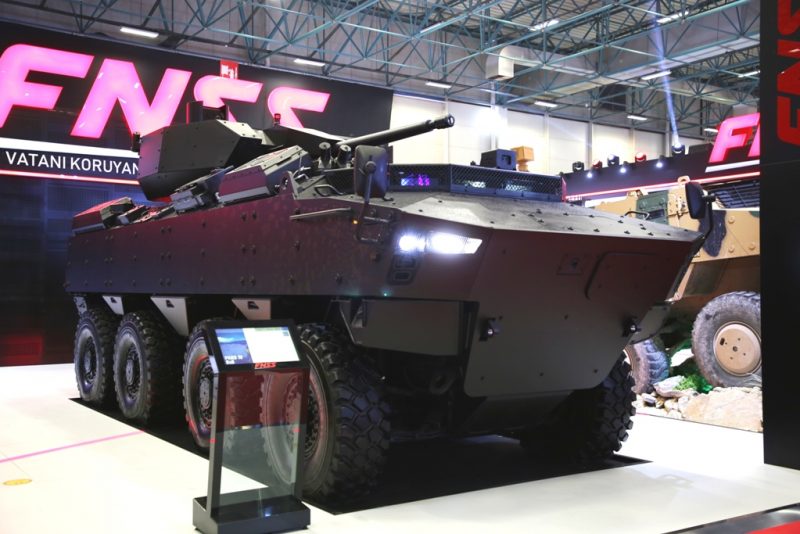 “The PARS IV 8×8 launched here at IDEF to meet the needs of the New Generation of wheeled armoured vehicles for the Turkish Land Forces is for FNSS a very important project,” Nail Kurt, the company CEO said at the press conference in which he announced the launch of three new products during the Istanbul exhibition. “The 8×8 version has the priority over the smaller vehicle, and the prototype that we can see here meets the requirements and needs of the Army, has a great firepower, and the GVW of over 35 tonnes does not sacrifice mobility and manoeuvrability.”

The FNSS CEO also underlined the increased mobility, thanks to an optimal distribution of the load on the four axles, the adoption of height-adjustable suspensions, produced in Turkey, and of all steering axles, which allow reducing the turning radius to 8.5 meters for an 8.4 meters long vehicle. “All the design and development of the PARS IV was carried out by FNSS with its own resources,” Mr. Nail Kurt stated, “and while the new vehicle is based on TLF needs, including the turret, we look forward to a new successful story on the export market.”

Following the press conference EDR On-Line had the opportunity to talk to Gökhan Tekin, the company Programme Manager International Programmes Directorate (Middle East). He explains that when in 2019 the New Generation vehicles programme was launched, FNSS realised that many of the improvements carried out within the PARS 6×6 Special Operations Vehicles were pretty similar to those of the new programme, hence the engineering effort could leverage the work done on that vehicle.

“While protection is pretty similar, although it is tailored to customer’s requirements, mobility has some different as tires are not the same, the PARS 6×6 SOV being fitted with 14R20 pneumatics while the PARS IV 8×8 is proposed with either 16R20 or 20R20, 14R20 being anyway compatible.” Another differing area is that of suspensions; “the 6×6 has more compact suspensions, with two stage heights, while the 8×8 has four stage double wishbone, independent, hydro-pneumatic suspensions.” The powerpack is obviously different, the 6×6 having a 523 hp engine while the 8×8 is fitted with a Caterpillar C13 with double turbine providing 711 hp, versus the 550 hp available on the PARS III. It is coupled to a fully automatic transmission with six speeds forward and one reverse. The PARS IV 8×8 can reach over 100 km/h while creeping speed is of 5 km/h, with an operational range of over 600 km. It can ford a 1 meter deep water obstacle, overcome a 2 meters wide trench, a 0.7 meters high vertical obstacle, angles of approach and departure being identical at 35°.

Although no details were provided about protection levels, Mr. Tekin explains that tests scheduled in European independent centres were cancelled due to pandemic. Beside tests carried out in house, the Turkish SSB decided to task Roketsan to become the qualification entity for vehicles, hence mine and IED tests were carried out in that facility, Ankara-based TRtest becoming the qualification entity. According to FNSS 90% of the verification work has been done, and after IDEF the vehicle will start reliability and durability tests.

The PARS IV 8×8 has a protected net volume of over 14 m3, which allows putting all soldiers’ equipment inside the vehicle, protected and accessible at any time. Beside the three-man crew, driver commander and gunner, the FNSS 8×8 in the proposed configuration can carry up to nine dismounts.

The FNSS prototype is 3.7 meters high on top of the Taber 35 turret, the in-house medium calibre unmanned turret armed with Northrop Grummans’ Bushmaster III cannon. Since the Taber 35 was shown at IDEF development work has progressed, “and now we are manufacturing the first prototype that will perform all functionalities in view of the comparative testing between the turrets proposed for the New Generation vehicles programme, that should take place in mid/late 2022, once competitive tests on platforms will be concluded,” Gökhan Özyurt, FNSS Manager Weapon System, tells EDR On-Line. The FNSS turret has a weight of less than 3 tonnes, with the full load of 100 35×228 mm rounds. The protection level of the Taber 35 turret is lower than that of the hull, the turret being unmanned. “We are carrying out further development work in order to reduce the turret volume and size, hence the weight, and this will be possible also thanks to a redesign by Aselsan of its Accor active protection system,” Mr. Özyurt says, EDR On-Line understanding that the APS should be integrated in the turret which is purposely designed to accept it. This further development should not bring considerable gains in terms of height reduction, as this is dictated by the length of the 35 mm ammunition, which is around 390 mm, as the feeding system located in the rear of the turret is based on a rail that keeps ammunition in the vertical position.

All the improvements done on the PARS IV allow bringing the vehicle into a new dimension, increasing dramatically crew protection, especially against mines and IEDs, improving mobility, adding a new upper tier element to the already rich FNSS portfolio of wheeled vehicles. 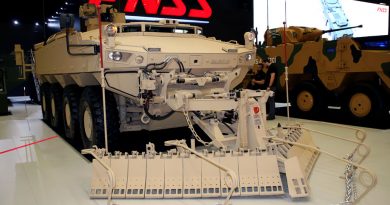 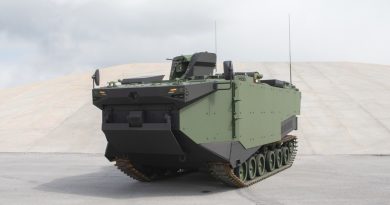 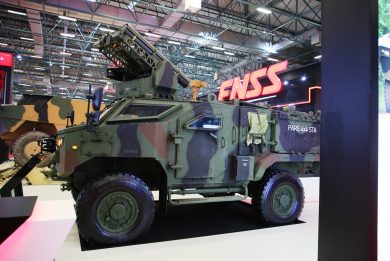