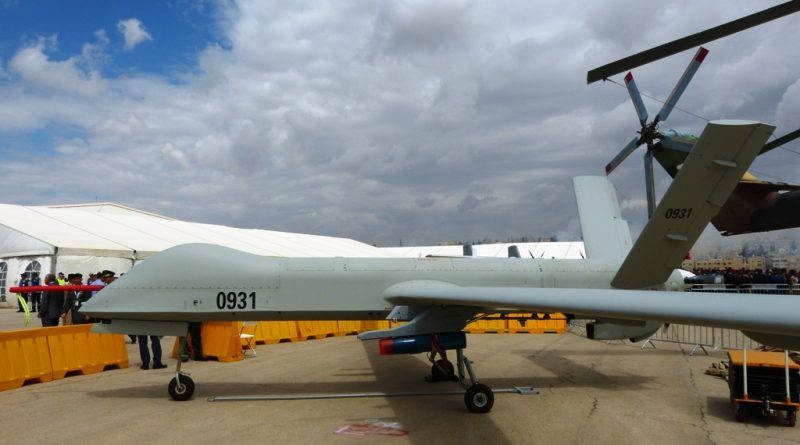 Making its defence show debut at SOFEX 2018 was one of the Royal Jordanian Air Force (RJAF) CH-4B armed unmanned aerial vehicle (UAV) which is in service with No 9 Squadron at Prince Hassan Air Base alongside the Leonardo Falco tactical UAV and Schiebel S-100 Camcopter vertical take-off and landing (VTOL) UAV.

As a result of the Obama administration’s ban on the sale of US-manufactured unmanned combat aerial vehicles (UCAVs) to Middle East countries, China has focused on filling the gap in this important market. The CASC CH-4 is operated by the air forces of Algeria and Iraq as well as Jordan and CASC is opening a UCAV production facility in partnership with Saudi Arabia’s King Abdulaziz City for Science and Technology (KACST) to produce the Reaper-like CH-4B.

In addition to the CH-4B MALE, several Jordanian agencies ranging from the Royal Engineering Corps and the Gendarmerie to the department of environmental protection operate a large number of Chinese DJI Matrice M600 multi-rotor VTOL micro-UVs.

The modular design of the six-rotor M600 make it simple to set up and operate within minutes. Its dust proof electric propulsion systems simplify maintenance while actively cooled motors make for reliable operation during extended periods of time.

Operated alongside the M600 is the lightweight DJI Inspire 1 quad-rotor VTOL micro UAV with a total weight of 6.7 lb (3 kg) including a payload of a Zenmuse X3 gimbal camera.