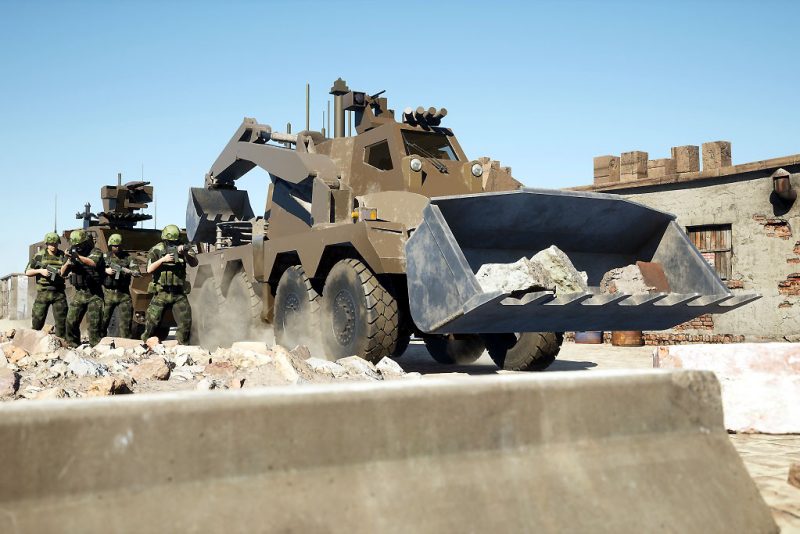 Two French companies, Texelis, which specialises in chassis and suspension systems, and CNIM, which provides numerous systems to French Army combat engineers, have teamed to propose the future Armée de Terre engineer vehicle, which will replace those currently in service. The MPG (Matériel Polivalent du Génie) loader was retired from service in 2005, due to the lack of protection, the next in line for retirement being the VAB (Véhicule de l’Avant Blindé) Génie, the engineer version of the obsolete 4×4 APC which is being replaced in infantry units by the Griffon 6×6, the VAB Génie meant to leave active service in 2025, the last to be retired being the EBG, the Engin Blindé du Génie, based on the AMX-30 MBT chassis, its end of life being planned for 2030.

As underlined by the speakers representing the two companies at the IAV Conference, organised virtually by Defence iQ, Maj.Gen. (ret) Denis Parmentier, military advisor to CNIM, and Jean Vandel, the Managing Director Defence at Texelis, 60% of French Army casualties on operation in recent years were part of combat engineer teams travelling on VAB Génie, which has much lower protection against mines and IED is than current wheeled infantry combat vehicles in service with the French Army, namely the VBCI (Véhicule Blindé de Combat d’Infanterie).

Within the Phase 2 of the Scorpion programme, which Phase 1 is currently underway the deliveries of the Griffon APCs having already started  while 2021 will see the first Jaguar reconnaissance vehicles entering service with the forces, the French Army should receive among others the MAC (Moyen d’Appui au Contact), the new engineer vehicle. The second phase of the programme has not yet been launched, the CNIM/Texelis team considering that a possible official call might happen in late 2021, early 2022. The requirements can be summarised in five bullets; same mobility of current APC and AIFV fleets, air transportability, high level of protection, a balance between engineer capabilities and weight, and simplified logistic and maintenance. The choice went to wheels, which ensure a higher operational speed on the ground, while reducing weight. “The French Army traditionally favoured mobility, but now protection has become also a key factor, and thanks to the cooperation with Texelis we are now proposing a concept of wheeled vehicle for sappers that ensures the same mobility provided by legacy tracked vehicles,” Gen. Parmentier says.

To acquire more information on MAC EDR On-Line also talked to Xavier Montazel, Director of the Defense & Maritime BU at CNIM. “We decided to team up with Texelis to develop this draft project to show that we have understood French Army requirements and that we have a solution to propose,” Montazel explains. He also unveils that a third major company should soon join the team, however he declined mentioning it as the signature of the agreement is still pending.

The concept renderings shown unveiled an 8×8 chassis fitted with 16R20 tires, with the heavily protected  operator’s cabin at the centre, the vehicle body reaching its full width behind the cabin, thus leaving a 180° field of view to the driver, the two other crew members, the commander and the gunner, seating in the left side of the vehicle; access and egress being made through two side doors on the left side, the front one for the driver/operator and the rear one for the commander and gunner. The operator is responsible for driving the MAC and using the front bucket, his position giving him optimal view downward and upward, the commander monitors the tactical situation and operates the excavator arm fitted on the right side of the vehicle, while the gunner ensures 360° observation, obtained through electro-optical sensors distributed around the vehicle, and operates the remotely controlled weapon station for self-defence, the team considering the T2 RCWS developed by Arquus for the Scorpion programme and, armed with a 7.62 mm machine gun. The vehicle is designed to ensure a 72 hours operation autonomy.

The MAC hull is made of ballistic steel providing a basic Level 2 protection according to STANAG 4569, add-on kits allowing to increase it to Level 4, while fence armour can be installed to cope with the RPG threat, the three-man crew operating under full ballistic and CBRN protection. No data were provided on protection against mines and IEDs, although being an asset dedicated to those who are the most exposed to such threats it is safe to assume that also in that field the MAC ensures maximum protection, with possible add-on solutions.

One of the key requirement is the earthmoving capability of the MAC. The vehicle proposed by CNIM/Texelis is fitted with a full-width front bucket  capable to build a 100 meters-long defensive firing position in 20 hours. The side excavator arm, which maximum extension was not provided, is fitted with a bucket and operates on the right side of the vehicle up to 3/4 front, but can also operate on the front arc if the front bucket is removed. The commander who operates it has a direct view through a side glass window located on the right of the vehicle. The bucket can be replaced by other tools, one of which can be carried underside the arm, while other would be eventually placed into a trailer. A hydraulic winch is installed at the rear.

Talking mobility, the chassis is designed around an independent suspension system, the MAC propulsion being provided by a diesel engine with an output of around 600 hp capable to run on diesel fuel typically used in operation, and will be capable to reach a threshold top speed on road of 80 km/h, with a 600 km range at that speed. The engine is located at the rear, on the left, behind the crew compartment. The vehicle will be fitted with three steering axis, the two front ones and the rear one, the latter counter steering at low speed in order to reduce the turning radius, and will be capable to overcome a 50% front slope and to cope with a 10% side slope. The MAC can tow a 14 tonnes trailer, this being currently only a notional element, no pre-design work having yet been done on it.

Being part of the Scorpion programme, the MAC could leverage developments carried out in different areas and be fitted with many of the systems already installed on the Phase 1 vehicles, such Thales Antares 360° Athena vision system  with integrated laser warning function and, in the future, incoming missile detection capability, Thales is also providing the Eclipse active counter-IED jammer, while Metravib is providing the SLA (Système de Localisation Acoustique, acoustic gunshot detector). According to  Xavier Montazel it is unclear which of those systems will be selected to be installed on the MAC, however the future engineer vehicle should be fitted with all of them. The team having verified that the vehicle roof can host all antennas and sensors required should all subsystems be installed..

The MAC concept proposed by the CNIM/Texelis team has a combat weight of 28 tonnes. Its shape allows it to be moved by road on a flatbed, when long distances have to be covered, by rail, it fits in the European rail size, while for long range deployments one MAC can be fitted into an A400M Atlas tactical transport aircraft, albeit to do so the bucket as well as add-on protections must be removed. It can however be flown ready to operate on board an An-124 Antonov.

Presenting their MAC concept at the IAV Conference the two speakers, Maj.Gen. Parmentier and Mr. Vandel aimed also at getting the reactions from the professional audience, as the two companies are obviously looking at other potential customers, hence getting their ideas in the very first phase of development might allow integrating some other features that could avoid costly modifications at a further stage. “We look forward to the official start of the programme,” Xavier Montazel concludes, “and we stay conservative, considering the minimum quantity required, which is around 75 vehicles, the maximum potential number being 150. 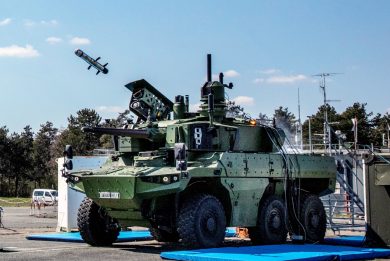 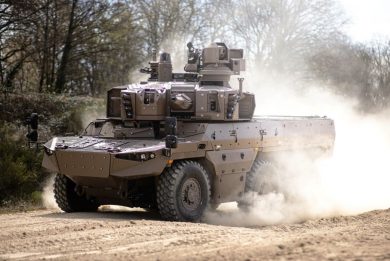 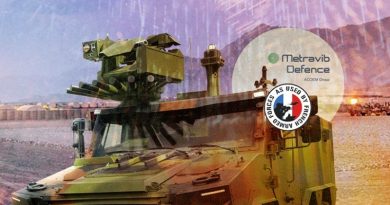