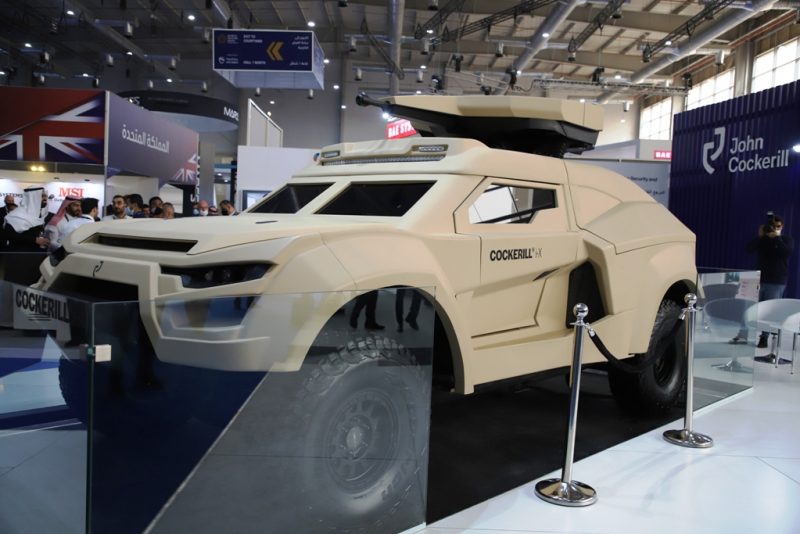 Although well hidden under the vehicle armour, the chassis of the Cockerill® i-X, the vehicle unveiled by John Cockerill Defense of Belgium at the World Defense Show, the first defence exhibition organised in Riyadh 5-9 March, comes from an undisclosed company that developed it for the Paris-Dakar rally, which since 2020 takes place in the Kingdom of Saudi Arabia. It made thus sense showing for the first time in public this concept armoured car that might influence the future choices of some armies.

At 14:10 of Day one of WDS the veil was lifted showing an aggressive vehicle with a low silhouette and a pretty angled windshield. However surprises were far from being finished: the top of the vehicle was then raised, and a purposely designed 25 mm turret appeared, the gun being raised up to an elevation of +60°, maximum depression being -10°. Speed is definitely one of the striking characteristics of this new 4×4, the Cockerill i-X attaining 200 km/h on roads and 160 km/h on desert sand tracks, a heritage from its rally-related chassis.

The 3.5 tonnes GVW vehicle is currently powered by a V-8 petrol engine, providing 750 hp. This is clearly a first step, gas being a no-go in the military, the final solution being a serial hybrid propulsion package which overall power is currently estimated at 800 hp, however the company is already looking at its growth potential, up to 1,000 hp. With the 800 hp the estimate is to be capable to reach 100 km/h from still in 6 seconds, brakes allowing stopping the car running at that speed in only 40 meters from a 100 km/ speed. The mission range is estimated at 600 km, and when equipped with the hybrid powerpack the Cockerill i-X will be capable to run for 40-50 km in all-electric mode, significantly reducing thermal and acoustic signature.

The chassis was modified by John Cockerill Defense especially in the suspensions area, which are hydropneumatic and can also be fitted with a controlled height mechanism. The only steerable axle is the front one, designers considering useless to make also the rear one steerable in a vehicle designed for high-speed missions.

A two-man crew vehicle, the Cockerill i-X is fully digitised, its cockpit screen allowing the driver to pull up all necessary information, while the commander has a high resolution screen providing the images captured by the Safran Electronics & Defense and the sight of the turret. When the vehicle is moving at fast speed to reach the area of operation, the turret is fully embedded in the vehicle roof. This allows lowering the centre of gravity increasing the vehicle stability, but also permits do disguise the Cockerill i-X to enemy eyes, looking like an innocuous patrol vehicle, as well as making it not aggressive to the eyes of civilian when crossing non-threatening populated areas.

Considerations on the CG are also valid on the longitudinal axis: the powerpack is located at the front-middle of the vehicle, which compensates well the fact that the turret and the 120 rounds are located at the middle-rear, CG falling slightly at the rear of the driver, “the ideal position” according to one of the designers. According to the company the turret weighs around 650 kg, to which we must add some 60 kg of ammo.

The rear of the Cockerill i-X opens up completely n order to allow a very quick ammunition reload, however it was not possible to see it open as the company intends to maintain this part under wrap for a while. A secondary armament can be installed in the form of a coaxial machine gun, either in 7.62 mm calibre with up to 600 rounds or in 12.7 mm with 400 rounds. Other solutions might include antitank guided missiles, with 2 to 4 ready-to-fire rounds, or 7-tube rocket launchers. As for the cannon, the 25 mm dual-feed can be replaced by a 30×113 mm low recoil solution, John Cockerill Defense looking not only over the Ocean but also to nearby France, where Nexter is developing its aviation gun into a land version.

Situational awareness is important to any soldier, but is even more important when carrying out long range recce missions at high speed. John Cockerill Defense thus introduced in its vehicle what it defines the “Information Superiority” based on high performance data collection, data processing, with embedded Artificial Intelligence based algorithms, data sharing, allowing 2-3 vehicles to share all information among them. The Cockerill Smart Helmet worn by the operator is fitted with an intelligent mutimodal engine that interacts with the human, lowering the workload while ensuring higher effectiveness.

Dimensions were not announced, but the vehicle looks pretty compact and low, while the pretty angled windscreen should reduce direct glare. As said the hybrid propulsion reduces signature in at least two domains. In the third one, the visible one, the company is working on active thermal panels to merge the thermal image into the landscape, this programme having received some financing from the Walloon Region. Work on passive IR paint is also in progress. As for armour, John Cockerill Defense leveraged its experience in helicopter armouring that allowed reducing the mass, the use of Sapphire armoured glass also contributing to weight control. The declared protection is Level 2 against ballistic threats and Level 3 against mines; no further details were provided on the latter, but considering the weight it should possibly be Level 3a. NBC protection is provided through masks linked to the NBC filtration system.

In his opening remarks Thierry Renaudin, President of John Cockerill Defense, said : “We are very proud to present, for the first time in the world, our new Cockerill i-X which embodies the essence of the operational superiority factors to be mastered on the battlespace using higher velocity, firepower, stealth and embedded intelligence. It will change the rules of land engagement.” EDR On-Line understood that the vehicle has already undergone mobility tests with the current petrol engine, as well as turret stability tests, shooting being the next close step, as soon as the vehicle will be back from Saudi Arabia. 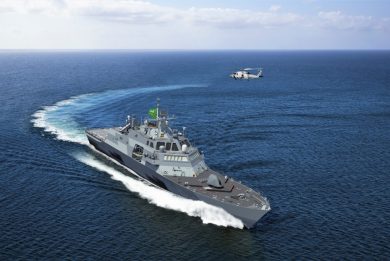 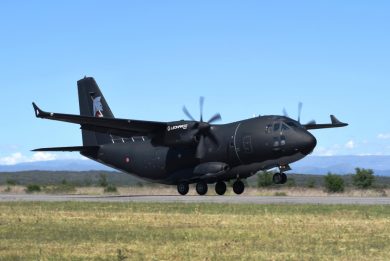 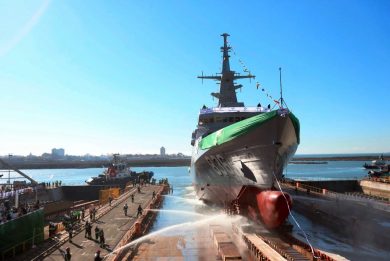