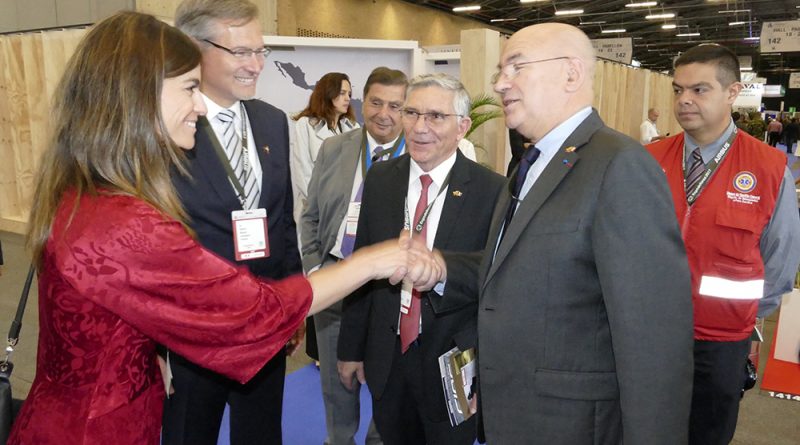 The biennial ExpoDefensa fair, which is currently in full swing in the Colombian capital, from December 4 to 6 at the Corferias exhibition center, is clearly showing its success with a steady growth and more than 5% increase compared to the previous venue. in 2015. Organized in Bogota with the support of COGES, the French maestro of the world renown Eurosatory, this small Latin American show now scores many points and is in sharp competition with that organized in Rio (LAAD) eight months earlier.

It must be said that with the end of the long civil war, following the Havana agreements between the government and the marxist rebellion, Colombia has become (along with Peru) one of the visible economic drivers of South America, and that this new situation attracts defense industrials of all countries. Only one figure speaks: 3.5% (of the gross national product) is Colombia’s proportion of it’s last military budget. And this budget is not likely to shrink soon enough because of the country’s official “post-conflict” posture which is to lead to a major conversion of its armed forces and police and their missions : « A new army for a new country » points the slogan to be seen everywhere on the Colombian army and police booths at the show !

With a total of 269 exhibitors (representing more than 300 well-known brands) from 35 different countries (nearly 75% foreigners) and the participation of more than 60 official delegations (including many from Europe) , the 2017 edition of ExpoDefensa has taken a more and more international turn providing it with an air of Eurosatory, so much all in markings and arrangement of the stands is a reminder of what visitors habitually see in Villepinte, France, albeit in a much reduced size…

Inaugurated this Monday by M. Luis Carlos Villegas Echeverri, the Colombian Defense Minister, ExpoDefensa was gifter by the visit from French Ambassador, H.E. Gauthier Mignot — along with a delegation of French parliamentarians led by Jean-Jacques Bridey, the new president of the Commission de la Défense et des forces armées of the French National Assembly —, who in turn accompanied in a two-hour long stroll of the exhibition stands, including those of “Le Village France”, both the Colombian Deputy Minister of Defense, Mr. José Javier Peréz Mejía, followed by the Colombian Secretary General of Defense (and prime decider for national military procurement), Dr. Luis Manuel Naira Nuñez.

Although this show has so far not been rich in announcements or new contracts, it has shown a strong “group effect” of French industrialists, assisted in their presence by a very successful demonstration of the French Armée de Terre on their booth where all that makes the particularity of this army was put forward, with detailled models of its new equipment (EBRC Jaguar and VBMR Griffon), but also with safe demos of firearms currently in service in France. A very appreciated and strong gesture, all the French soldiers present spoke Spanish, which at the end of “The Year of France in Colombia” did not lack any “panache”.

Interviewed at the time of his visit of the show, the Colombian Minister of Defense deplored the absence of his French counterpart, Ms. Florence Parly yet invited… Speaking to French reporters in very good “français”, — because of his distant Basque ancestry — Luis Carlos Villegas Echeverri did underline politely and in highly diplomatic words the somewhat “faint official interest” presented by any high level French Ministère des Armées’ heads for ExpoDefensa which surprisingly came about just at the closure sing of a year of Franco-Colombian official celebrations. The highest representative of the government from Paris being a two-star general of the DGA, the French Procurement Agency…