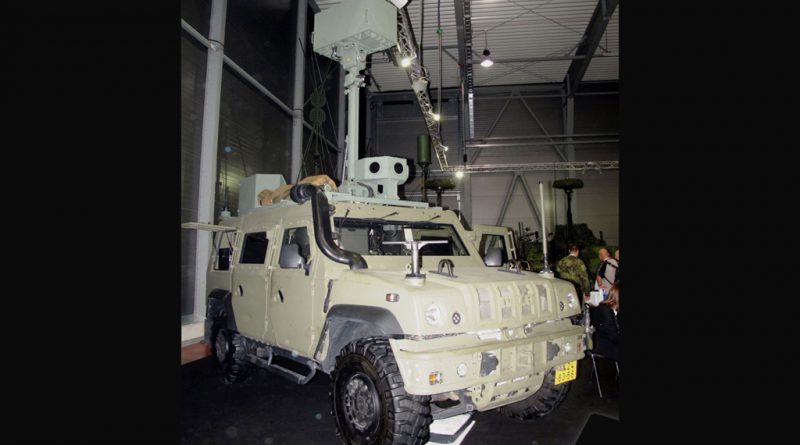 In the Czech Army stand at the Future Forces Forum the 53rd Reconnaissance and Electronic Warfare Regiment was showing the prototype of the new mobile radar identification system based on the LOV (Lehké Obrněné Vozidlo) Iveco DV 4×4 light armoured multirole vehicle. The vehicle featured a broadband direction finding radar seeker developed by the Brno VVÚ (Vojenský výzkumný ústav, military research institute), the SRTP (Směroměrného Radio Technického Pátrače). This direction finding ELINT/ESM system detects radio electronic signals in the 1–18 GHz and 32–38.5 GHz bands, using the interferometric method. Currently at prototype level, it operates in the typical radar frequencies, and is mostly aimed at automatic identification of such systems, including those with low probability of intercept. The parallelepipedal antenna rotates on 360° and can be raised at nearly 6 meters height thanks to a 4 meters telescopic mast; the sensor package can also be deployed at distance from the vehicle when needed. Signals are detected in a ± 30° elevation arc.

According to data provided at FFF the SRTP bandwidth is up to 200 MHz, receivers having a –75 dB sensitivity in all bands, minimum impulse width being 100 ns, while minimum PRI (Pulse Repetition Interval) is 1.5 1-JS. The antenna provides an arc of instant reconnaissance of ±45°, accuracy of direction measurement being 2.5° at the extremities and 1° when in line of antennas, accuracy of frequency measurement being 1 MH at the minimum PRI. One vehicle is able to identify the type of radar and to establish the direction of the incoming signal, while to establish the exact position of the radar at least two vehicles are needed. With part of the space occupied by the electronic equipment, the LOV SRTP hosts a crew of three, driver, commander and operator.

When produced in quantities, it will be deployed by the 532nd Electronic Warfare Battalion, which has already received at least one LOV MPRS II, which was also visible at the Prague exhibition. The Mobilní Průzkumně-Rušicí Systém II is a signal intelligence system capable to pick up signals in the 1 MHz – 6 GHz band and to identify the direction of the signal in the 20 MHz – 3 GHz band, accuracy of the direction finding being 2°. Compared to the previous MPRS its antenna can be raised 3.5 meters above the vehicle thanks to a telescopic mast. The LOV MPRS II is also equipped with a Starlight 3 RCIED allowing to jam incoming signals in the 25 MHz – 2.5 GHz band, with an output power of 275 W. The Iveco DV LOV was also shown at IDEB 2018 in Bratislava in the Intelligence, Surveillance and Reconnaissance version, fitted with an optronic package on a collapsible mast.