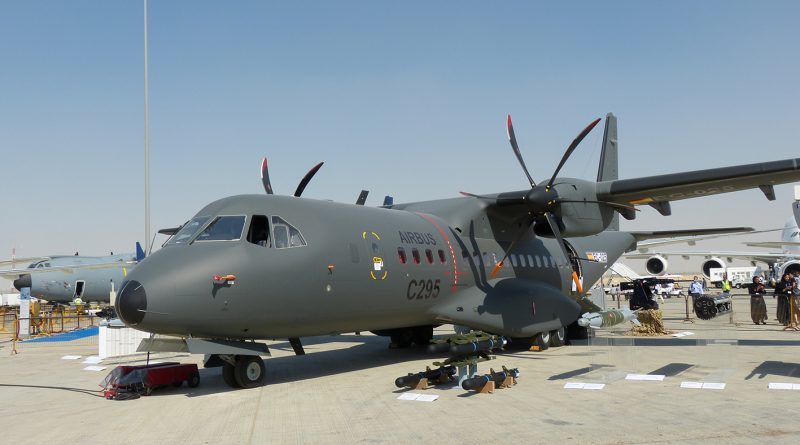 The 2017 Dubai Air Show saw trade visitors to the event up 20 percent over 2015, with more than 1,100 exhibitors and some 79,380 people visiting the event held at Al Maktoum International Airport-DWC. Dubai during the five-day event, US $113.8 billion worth of contracts were signed.

However, very few of the contracts were for military aircraft, the vast majority being shared between Airbus and Boeing commercial airliners. One company that bucked the trend was Airbus Defence and Space which announced that the United Arab Emirates Air Force & Air Defence had ordered five Airbus C295 medium transport aircraft. The aircraft will serve with the UAEAF&AD replacing the existing fleet of CN235s still in operation. Deliveries will begin in the fourth quarter of 2018.

Orders for the C295 in the Middle East and North Africa (MENA) region now total 51. Bernhard Brenner, Airbus Defence and Space Head of Marketing & Sales said: “The C295 is a tough and reliable aircraft that is thoroughly proven in the Middle East operating environment. Passing the milestone of 200 sales – now 203 following this order – is a clear demonstration of its widely recognized capabilities and excellent value. We look forward to placing many more C295s in this region and beyond.”

Airbus Defence and Space also showcased its new C295 armed Intelligence Surveillance & Reconnaissance (ISR) version at the Dubai Airshow. The company signed a series of agreements with air-to-surface weapon suppliers paving the way for flight-trials to qualify their products to equip the C295. Since the previously announced memorandum of understanding (MOU) with Roketsan of Turkey for the UMTAS anti-tank missile and Cirit laser-guided missile and similar arrangements have been reached with Expal, Escribano and Equipaer of Spain, as well as Rheinmetall of Germany, and the US suppliers Nobles Worldwide and US Ordnance. The company s to deliver a C295 system with two machine guns fitted on the rear ramp to an undisclosed customer.

Thales and PAL Aerospace unveiled the Force Multiplier based on the Dash-8 Q 300 turboprop aircraft. (PAL)

At the Dubai Air Show, Thales and PAL Aerospace unveiled the Force Multiplier based on the Dash-8 Q 300 turboprop aircraft. With an endurance of more than 10 flight hours, the aircraft is specifically designed to provide an operational service that meets the immediate needs of both government and private customers in terms of maritime and ground surveillance. The operations will include search and rescue at sea, life raft deployment, immigration control, surveillance of sporting events and forest fires, as well as border surveillance.

Users will be able to reserve flight hours as early as 2018, offering them an on-demand operational platform, without acquisition or maintenance support costs. Thales, as system supplier, will provide the SEARCHMASTER multirole surveillance radar, offering an unbeatable level of performance, and the AMASCOS multi-mission system, with its extended, scalable surveillance capabilities, as well as the ground station. As a result, it will be possible to prepare mission data and share the tactical situation in real time. In addition, operators will have the opportunity to replay and analyse their missions.

All of these features will ensure operators act efficiently and at exactly the right time. PAL will operate the service aircraft that will also be available for training of future flight crews, as customers participate in platform acquisition programmes.

Thales also announced that United Arab Emirates Armed forces intention to sign a contract for the upgrade of its Dassault Mirage 2000-9 fleet. 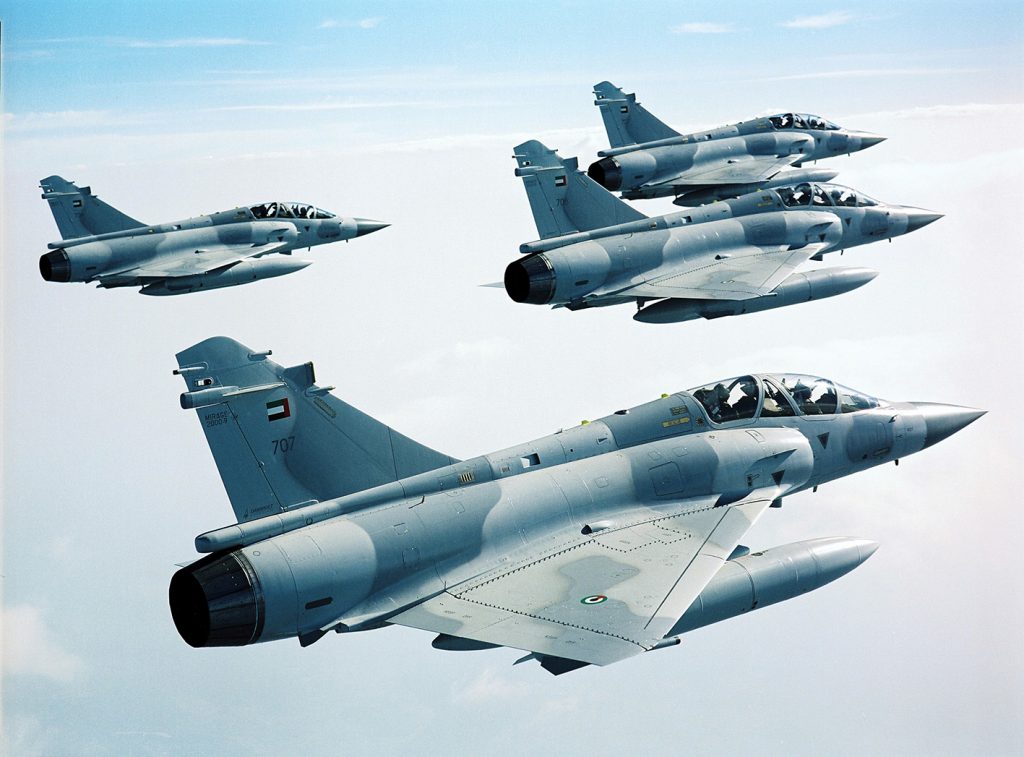 For 40 years, Dassault Aviation has been a partner of the United Arab Emirates, whose air forces have acquired the Mirage 5, Mirage 2000 and, today, the Mirage 2000-9. The French detachment deployed to Operation Chammal from the Al Dhafra airbase in the Emirates is equipped with the Rafale multirole fighter aircraft. A single-seat French Air Force Rafale C took part in the flying display at the Dubai Air Show.

Dassault Aviation is well placed to address both defence and economic challenges, owing to its dual nature: the company produces military aircraft (Rafale, UAVs) and business aircraft, including the new a Falcon 8X and a Falcon 900LX, from the same design office and the same manufacturing plants. The high technologies derived from its defence activities then benefit the civil side, which in return generates international industrial development. 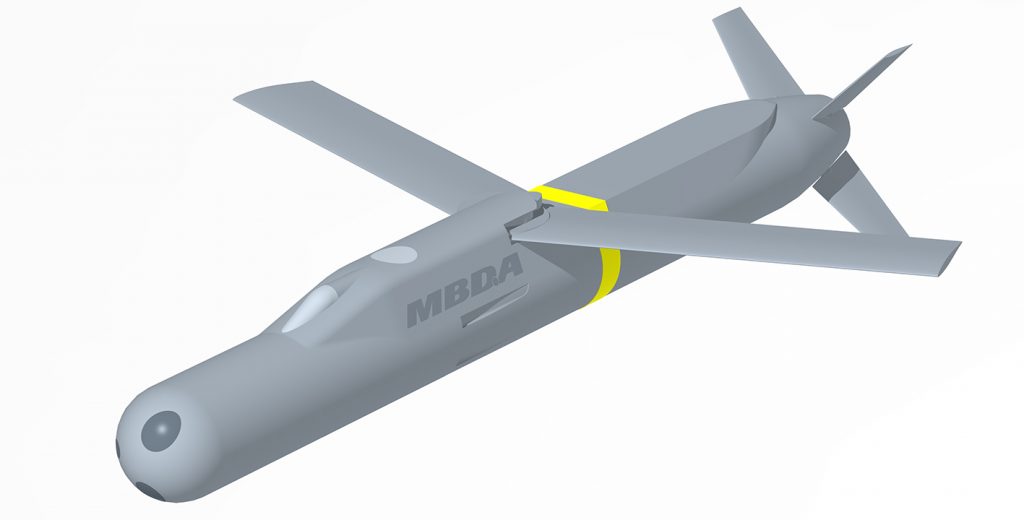 MBDA showcased the SmartGlider guided air-ground weapon to the Middle East for the first time. (MBDA)

On the weapons front, MBDA launched the new SmartGlider family of guided weapons to the Middle East. Optimised to counter anti-access strategies and other emerging battlespace threats, SmartGlider is planned to become available for fast jets by 2025, SmartGlider forms a family of all-up-round glider weapons, with folding wings and a range of over 100 km. This new generation of air-to-ground weapons is designed to counter new networked short- and medium-range surface-to-air threats, as well as moving/relocatable targets or hardened fixed targets.

The compact family member, SmartGlider Light, is 2 meters long and weighs 120kg. 12 to 18 SmartGlider Lights can be carried on an aircraft Hexabomb Smart Launcher (HSL) capable of managing reactive strikes without affecting the pilot’s workload.

For general purpose missions, the SmartGlider Light can be engaged against a wide spectrum of targets, from hardened and defended fixed targets such as hangars, to relocatable targets that can only be destroyed from a standoff distance with significant lethal effects.

A 1,300 kg SmartGlider Heavy is able to carry a multipurpose warhead of more than 1,000 kg to deal with large and hardened infrastructure.

The SmartGlider is seen as a weapon of choice for Rafale and Eurofighter ground attack missions, both of which are in service in the Middle East.

MBDA also displayed its new Mistral ATLAS-RC system. Designed in response to a Spanish MOD requirement to modernize its existing Mistral surface-to-air missile launchers, this new system is based on a remotely controlled turret, equipped with two Mistral missiles and a latest generation thermal sight, capable of being mounted on light armoured vehicles.

The new ATLAS-RC system provides greater protection to the crew, since it can be operated from within the vehicle’s cabin or, remotely, through a state-of-the-art fully mobile workstation. Its 360° revolving, motorised turret is easy to operate, provides an optimised operational capability while at the same time keeping costs to a minimum.

ATLAS-RC is compatible with all versions of the Mistral missile and benefits from its many performance advantages which include fire-and-forget capability; high reliability and high kill probability against fixed and rotary wing aircraft and UAVs. Mistral incorporates a full imaging IR seeker that provides a very high resistance to IR countermeasures as well as the ability to engage low IR signature targets. 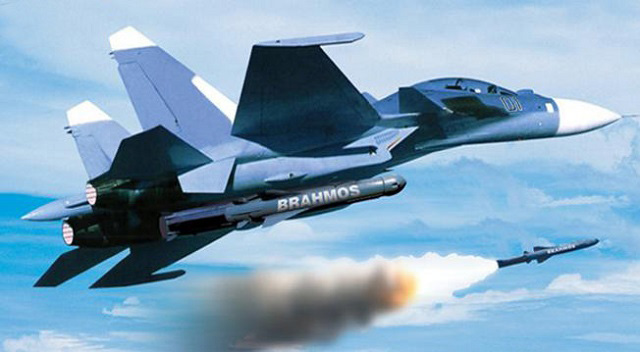 One of the few Indian companies at the Dubai Air Show was Brahmos which is responsible for designing, producing and marketing Brahmos supersonic cruise missiles for land, sea and air applications with the active participation of a consortium of Indian and Russian industries.

By the end on the year Brahmos will have finished all the tests for the air-launched version of the cruise missile. This will complete the air, land and sea version of the missile which is common to all three platforms. Attending the Dubai Air Show for the first time, Brahmos hosted delegations from 14 countries from around the world. The air version of the missile is designed to be launched from the Sukhoi Su-30/35 which is in service with the Indian and Indonesian Air Forces, while the company showed models of the sea-launched system integrated on a frigate, destroyer and submarine.

Opening image : The armed-ISR version of the Airbus C295 displayed at the Dubai Air Show. Five C295 transports were ordered by the UAE Air Force at the show. (David Oliver)