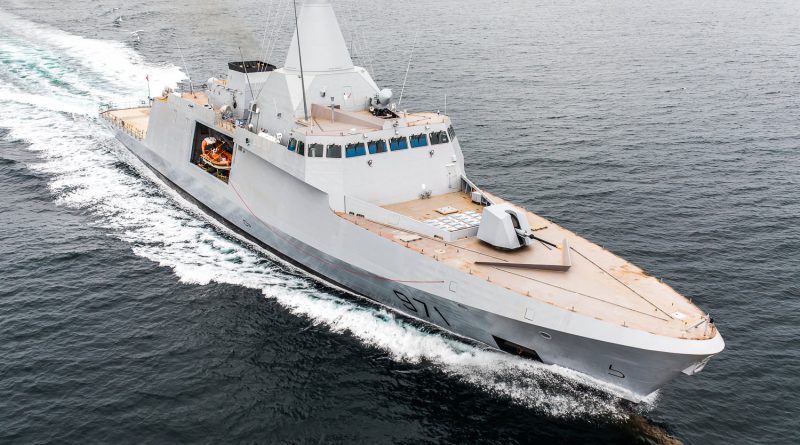 Naval Group, the former DCNS, which participated last month in BIDEC, Bahrain international defence exhibition and conference (from 16 to 18 October 2017) and was in negotiations with the UAE government, announced officially, during French President Macron visit in Abu Dhabi on 9 November 2017, that the United Arab Emirates Navy just placed an order for two Gowind corvettes. As a leader in naval defence, Naval Group provides high tech solutions and develops ambitious industrial cooperation in the region to serve autonomy and sovereignty to its customers.

The future vessels will be assembled in cooperation with Abu Dhabi Ship Building Company (ASDB) as a mean to develop cutting-edge naval solutions in the MENA region. This is more than excellent news for France’s Naval Group (ex-DCNS), which now will be in a better stand in order to keep its Lorient shipyards busy for a few more years pending the arrival of more FREMM orders for the French Navy and other customers… In the wake, this UAE Navy order comes as a mean to save the Naval Group’s nearby Lanester construction site, run by Kership, the joint venture company DCNS started with Piriou back in 2013 to build only up to 95-metre OPV vessels.

The Gowind 2500 represents a new generation of multi-mission corvettes, robust and well equipped, both in terms of electronics, weapons and projection capacities. Integrating Naval Group SETIS Combat Management System, she has a comprehensive Combat System for full-scale multi-threat missions, including a complete Anti-Submarine Warfare (ASW), Anti-Air Warfare (AAW), and Anti-Surface Warfare (AsuW) suites. The Gowind 2500 family has already enjoyed a significant commercial success as ten units were sold in 2013 and 2014 for the Malaysian Navy and the Egyptian Navy. Just recently, Naval Group delivered on 22 September 2017 the first of class Gowind 2500 corvette to the Egyptian Navy, the 2,600-ton ENS Elfatheh.

Obviously, Naval Group now positions itself sturdily to build strategic partnerships with regional industry in the Middle East. With a long tradition of technology transfer, Naval Group has consistently demonstrated that it can be a key partner for navies, giving its customers full control of their sovereignty, something ASDB has since positively experienced with the Baynunah-class programme set up with France.