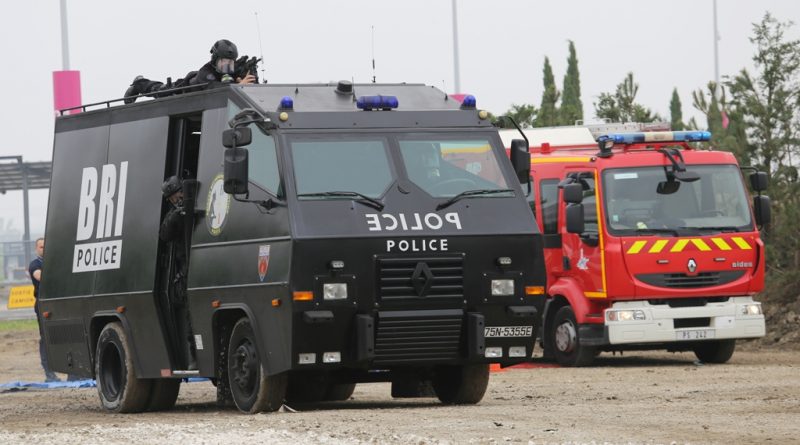 While in the past editions of Eurosatory the dynamic demonstration was solely a matter of industry presentations, albeit often with the support of the French Army, the 2018 edition sees also the demonstration of French armed and police forces capabilities.

Each day between 9:45 and 10:45 AM and between 3:30 and 4:30 PM (on Friday only in the morning) Daimler, Milrem and FN Herstal, Azur Drones, Protecop and Aeneas, Arquus (formerly Renault Trucks Defense for those who didn’t yet got used to the new name), Sides, Spartan Military, Manitou, Isuzu and Streit, will show to the public their products in the demo titled “New Responses to Actual Threats”. To see that demo photo gallery please click here

However as said, French Army, Gendarmerie, Police, Firefighters and emergency units also displayed their capabilities. The rehearsal of the demonstrations, open to the press, saw the RAID, the Intervention Unit of the French National Police, who demonstrated its vehicles, among them the Arquus PVP, also used during recent terrorist attacks in the French capital, as well as Nexter’s Titus 6×6, which managed to overcome a steep slope which looked quite incredible considering the weight of that vehicle. The close defence of a VIP under attack showed only one of the many skills of that unit. The RAID will perform on Tuesday 12, between 11:30 to 12:00 AM. To see the RAID demo photo gallery please click here

The Paris Police HQ set up a demonstration that saw its Investigation and Intervention Brigade, the BRI, the Paris Fire Brigade, which is part of the French Army, and the Police Security and Intervention Company operate together to solve an hostage situation that turned soon in a potential CBRN incident. In the final stage of the incident a Paris public transport driver took control of the bus, the RATP having trained some of its personnel to operate in CBRN environment. This demo will be performed on Wednesday 13 between 2:30 and 3:00 PM. To this demo photo gallery please click here

As the industry demo closed the morning programme, that of the afternoon was started by the French Army, which deployed reconnaissance, combat and logistic units and equipment. Among the systems deployed we could see two VBLs, one with the PL127 mount armed with a 12.7 mm machine gun and one with a Wasp RCWS with a 7.62 mm MG, nits, some PVPs used by EW units as well as by mine-clearing, the latter fitted with RC-IED jammers and VAB Ultima, all part of the Arquus portfolio. As for Nexter, a VBCI fitted with anti-RPG protection was performing, deploying a full complement of soldiers featuring the latest acquisition in terms of small arms, while a Caesar  howitzer simulated a fire mission. The French Army will perform on Wednesday 13, between 11:30 and 12:00 AM. To see the French Army demo photo gallery please click here

Special Forces tend to be stealthy, and this is what happened on the demonstrating field at Villepinte, as most of the target acquisition phase was inevitably done by the invisible warriors hidden in the artificial heights of the demo ground. Only in the final phase SF operators showed up to grab the insurgents, some of them being neutralised while one was captured. In that phase the SF operators of the French Army not only demonstrated their tactical skills, but also those in the acquisition of evidences that are key when searching for high value targets. Army SFs will perform on Tuesday 12 between 2:30 and 3:00 PM. To see the Army Special Forces demo photo gallery please click here

Last but definitely not least came the GIGN, the Special Task Unit belonging to the Gendarmerie Nationale. Some containers were located on the field to simulate a couple of buildings, one being a two-storey, where hostages were kept. Following the acquisition two terrorists were shot at unison by two GIGN snipers – the two balloons representing their heads exploding really in the same moment, then it is the turn of the assault elements to take over, using civil armoured cars as well as an Arquus Sherpa fitted with an assault ladder, this used to storm the second store of the building. Anti-explosive dogs were key in dealing with possible booby traps as well as for finding potential terrorist among hostages, sniffing them to check if they had been in contact with explosives. The GIGN demo will take place on Thursday 14 between 2:30 and 3:00 PM. To see the GIGN demo photo gallery please click here