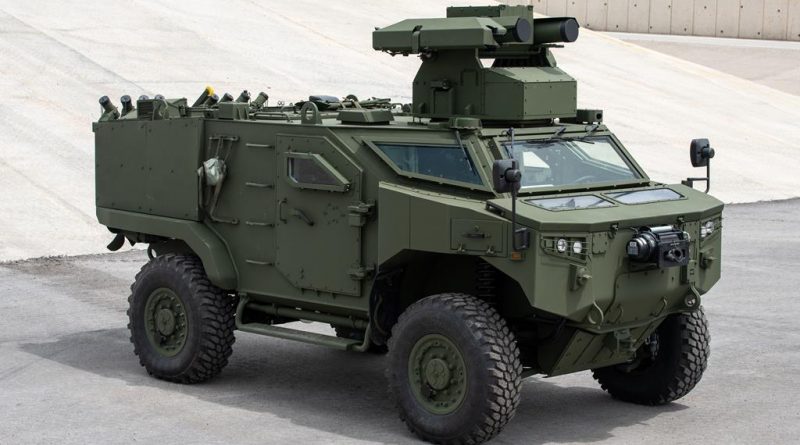 FNSS, the joint venture owned 51 percent by Nurol Holding and 49 percent by BAE Systems Inc., unveiled at Eurosatory the prototype of the PARS 4×4 AntiTank Vehicle (ATV in short), developed under a contract from the Turkish Land Forces that ordered 260 vehicles, this number also including a tracked vehicle, the Kaplan-ATV, also under development by FNSS; the actual split will see 76 wheeled and 184 tracked produced. In fact the wheeled vehicle was produced in close cooperation with sister company Nurol Makina, K. Nail Kurt, General Manager and CEO of FNSS, explained at the press conference that took place on Day 1 at Eurosatory, FNSS being mostly in charge of turret and systems integration; Nurol Makina, a specialist in 4×4 vehicles, will also be the one producing the vehicle. The PARS 4×4 ATV concept vehicle was shown at IDEF in May 2017, however the Paris exhibition marks the first appearance of the real vehicle. The wheeled and tracked vehicles as well as the Remote Controlled Anti-Tank Turret (RCAT), also designed and produced by FNSS, were presented to the customer in early 2018, according to scheduling, the turret being the same for both vehicles. Company tests started in May and are ongoing with the second PARS 4×4 ATV prototype, which will be joined by the one on exhibition at the end of Eurosatory, to complete company trials before shifting to qualification tests. 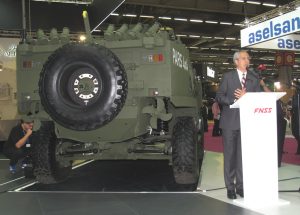 While maintaining the same name of the PARS 6×6 and 8×8 FNSS, the 4×4 is a wholly different vehicle. Mobility, also in water as amphibious capability is a must for Turkish Land Forces, and situational awareness were the key issues, which led to an architecture featuring a rear-mounted powerpack. This allows an over 180° view to the driver and commander, thanks to the single windscreen and the two side windows, rear view being provided by an integrated camera, while the positioning of the cooling system makes it possible to overcome a water obstacle without preparation, the only requirement being to switch on bilge pumps and to raise the trim vane. When floating the PARS 4×4 ATV is pushed by two rear propellers and can reach a speed of 6.5 km/h (3.5 knots). Considering the volume, the vehicle is 5 meters long, 2.6 meters wide, the hull being 2.1 meters high, the combat weight should be slightly less than 13 tons, no exact data being provided, the same being true for the engine output, the powerpack including a full automatic transmission. However considering a declared power-to-weight ratio of 25 hp/t the engine should deliver around 300 hp. Cross country mobility is ensured by full independent double wishbone suspensions with coil springs. The PARS 4×4 ATV can reach 110 km/h on road, and has a maximum range of over 700 km. It can climb a 70% gradient and can move on a 40% side slope; the vehicle can overcome a vertical obstacle of 40 cm and an 80 cm wide trench; turning radius is of 7.5 m. 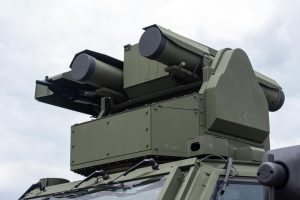 No information is available on protection levels, however being a frontline vehicle we might expect at least a Level 4 ballistic and a Level 3a/b antimine; the armour being modular, upgrades will be possible all along the vehicle operational life. The four-man crew access the vehicle through the side door available on each side (instead of the two seen on the mock-up at IDEF) and are seated on energy absorbing seats, safety being also provided by the automatic fire suppression system and by anti-blast fuel tanks installed in protected positions. The vehicle features an effective air conditioning system and a CBRN protection system. The internal layout sees the driver front left with the commander at his right side, the gunner being in the back right seat with the co-gunner at his right.

Firepower is provided by the RCAT electric driven turret with two-axis stabilisation, which is installed at the front of the roof. In the middle we find the optronic pod which hosts a thermal camera, mid or long wave depending on customer’s requirements, a day camera, and the laser rangefinder with a 10 km range. Right and left we find the two ready-to-fire antitank missiles, four spare missiles being carried in a container at the rear of the crew cell; when the crew needs to reload the launcher, the container is raised and spare missiles are manually loaded in the turret. The current prototype is fitted with a turret carrying two Kornet missiles of Russian origin, however in a few months a version armed with Roketsan Omtas missiles, having a range of 4 km and many more functions, will be available. In fact mechanical interfaces are very similar, however as the Omtas is more sophisticated a longer verification time in integration laboratory is needed. The turret recently performed its first firing test with the Kornet missile, successfully hitting the target at maximum range. 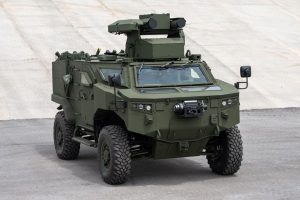 On the right side of the RCAT we find a pod that contains a 7.62 mm machine gun with 500 ready rounds, used for self-defence purposes. Traverse is continuous on 360° while elevation is ±25°. No smoke grenades are fitted to the turret, these being installed at the rear of the vehicle, four aiming right and four left.

Looking at strategic and operational mobility, the PARS 4×4 ATV can  be easily transported by a C-130 Hercules, and by bigger aircraft such as the A400M, the C-17 and the C-5.

The contract for the new antitank vehicles was signed in June 2016, and became effective four months later. The milestone that was overcome in early 2018 allowed to start production activities, first deliveries being expected in 2019, the programme requiring all tracked and wheeled vehicles to be delivered within 2021.

According to K. Nail Kurt, the PARS 4×4 has already attracted considerable interest from potential export customers, not necessarily in the antitank version but also in reconnaissance and other versions, the vehicle being also available in non amphibious configuration.