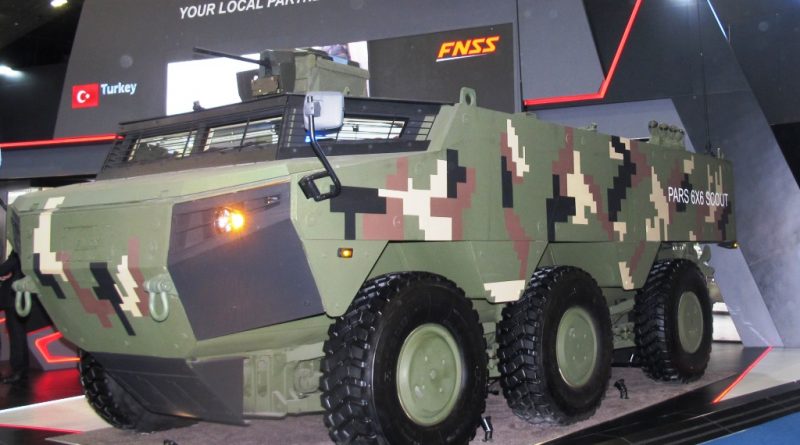 Located in front of the DefTech stand, with which it has a long lasting partnership in the development of the Malaysian AV-8 Gempita, the FNSS booth is dominated by the PARS 6×6 Scout, unveiled at IDEF 2017 in Istanbul. The Malaysian exhibition marks the first appearance of the PARS Scout outside Turkey. The version showcased at Kuala Lumpur is the Internal Security vehicle, which has driver and gunner at the front and commander at the back, and is fitted with a light RCWS and a 360° camera system.

The Scout 6×6 was developed by FNSS, a JV owned at 51% by Nurol and at 49% by BAE Systems, to answer Turkish requirements for the SPV (Special Purpose Vehicle) programme; to this end it was developed in the reconnaissance, surveillance, radar and CBRN versions, Turkish Land Forces not considering the 6×6 for combat purposes. The decision to bring the PARS 6×6 Scout at DSA 2018 was taken considering that this vehicle might have better chances to win the incoming bid for a 6×6 armoured vehicle that the Malaysian Army should soon launch. The most visible difference bwteeen the PARS Scout and the PARS III is given by the large transparent windshield made of armoured glass that allows unprecedented view to the pilot and to the commander compared to traditional armoured vehicles.

Moreover the PARS 6×6 was already tested in Malaysia, and it is the small brother of the PARS 8×8 from which the AV-8 was derived, so it was already well known to the country hosting DSA. The PARS Scout is fitted with independent and height adjustable hydro-pneumatic suspensions and has a 25-30 hp/ton power-to-weight ratio which provide him considerable mobility. The position of the engine, behind the driver, ensures that the vehicle’s axle loads are almost equal, which further increases mobility. According to FNSS representatives the PARS 6×6 Scout has good opportunities in South-East Asia not only in Malaysia but also in the Philippines and other south-eastern Asia nations.