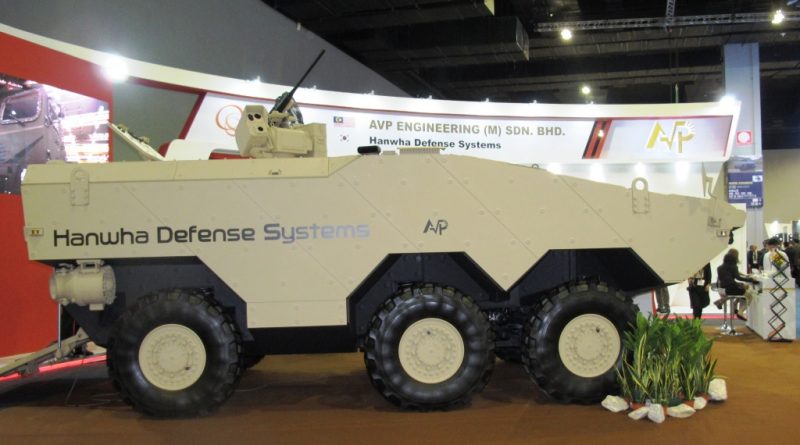 International armoured vehicles producers are lining up for the expected bid on a 6×6 APC for the Malaysian Army, which will be part of the service modernisation programme. South Korean Hanwha unveiled at DSA its Tigon, a wholly new vehicle that leverages the experience acquired with the Black Fox, currently in service with Indonesia. A heavier vehicle, 21 tons with some growth margin, the Tigon can host a crew of two and 11 dismounts in the personnel carrier variant. It is powered by a Caterpillar C9.3 530 hp engine coupled to a full automatic Allison 4500SP transmission, and is fitted with independent whishbone suspensions with coil spring and shock absorber.

The prototype on show, which already underwent company tests in Korea, is amphibious, and is propulsed in water by two waterjets that ensure an 8.5 km/h speed, maximum speed on road being 100 km/h; cruise range is estimated at 1,000 km. Hanwha teamed with Malaysian AVP Engineering, which EDR understands having an MoU with the Malaysian MoD for developing a 6×6 solution; the Selangor based company selected Hanwha as its partner, the Tigon development having been launched in early 2017. Although no details on protection have been provided, the new vehicle should have increased levels compared to the Black Fox. The vehicle on show is fitted with a 12.7 mm RCWS, but the Tigon team states that the vehicle can also host bigger caliber turrets, 30 or even 90 mm, the latter calibre being in use in Malaysia on Scorpion light tanks and on SIBMAS 6×6 armoured fire support vehicles. With such turrets the Tigon combat weight would increase to 22 tons.

Following the testing in South Korea Hanwha prepared the vehicle for DSA; following the show the Tigon will undergo endurance, road, jungle and amphibious tests in Malaysia to verify its compliance to Malaysian requirements. Next summer the vehicle is expected to conduct trials in the UAE, the Middle East being another marketing area for this vehicle, beside south-east Asia.