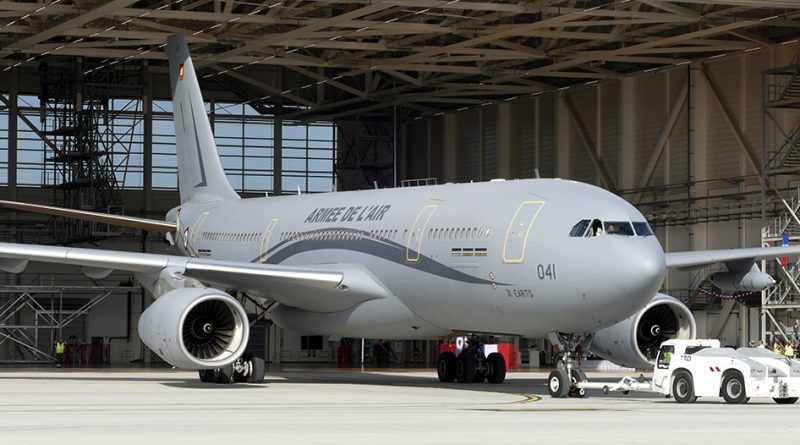 October 19th, 2018, will be remembered by many aviationists and invitees present at Istres air base BA 125 as the day that witnessed the official hand out to the French Air Force of its very first Airbus A330 Multirole tanker and transport new generation aircraft.

The well-dubbed A330 MRTT “Phénix” is due to replace over the 2018-2025 period the now well long-in-tooth Boeing Stratotanker fleet of fourteen aircraft — C-135FR and KC-135RG — which have been at the heart of France’s “Force de Frappe” since 1964. Precisely on October 8th, 1964, when General de Gaulle, then Président de la République, witnessed at BA118 in Mont-de-Marsan the first alert take-off  of a Dassault Mirage IVA nuclear bomber supported by a Boeing C-135F. Some twelve A330 MRTTs should re-equip GRV 2/91 “Bretagne” in a six to seven time-scale with the second aircraft earmarked to land at Istres by the end of 2019, by which time the dry-run operational evaluation of the big aircraft by a specialized CEAM French Air Force team of 40 pilots, boomers and mechanics, started in late 2017 will be complete. As of today, the “Phénix” is fully qualified to top-off with all models of in service Mirage 2000s and Rafales, thus providing the French 200-strong fighter fleet of Mirage 2000s and Rafales with a hi-tech 3X-force multiplier elongation tool. 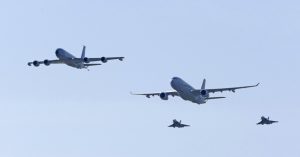 The Boeing KC-135 Stratotanker was initially purchased by the USAF to support bombers of the Strategic Air Command, but by the late 1960s, in the Southeast Asia theatre, the KC-135 Stratotanker’s ability as a force multiplier came to the fore. Midair refueling of F-105 Thunderchief and F-4 Phantom II fighter-bombers as well as B-52 Stratofortress bombers brought far-flung bombing targets within reach, and allowed fighter missions to spend hours at the front, rather than a few minutes, which was usual due to their limited fuel reserves and high fuel consumption.

France initialy purchased from Boeing twelve C-135F models — actually a cross-bred between the USAF KC-135A tanker and C-135B cargo — three of which were placed in QRA spread out in three dedicated tanker units — escadrons de ravitaillement en vol (ERV), all aircraft were delivered between 1964 and 1966. After 1999, they were joined by three additional refurbished  “Pacer-Crag” (CRAG = Compass, Radar And GPS) KC-135Rs purchased directly from USAF stock. Each Armée de l’Air squadron had on strenghth a quartet of C-135F on rotating alert :

A little voyage in time

It should be recalled that the Boeing KC-135 Stratotanker entered service with the United States Air Force (USAF) in 1957; it is one of six military fixed-wing aircraft with over 50 years of continuous service with its two original operators : the USA and France. All KC-135/C-135Fs were originally equipped with Pratt & Whitney J-57-P-59W turbojet engines, which produced 10,000 lbf (44 kN) of thrust dry, and approximately 13,000 lbf (58 kN) of thrust wet. Wet thrust was achieved through the use of a water injection system on takeoff burning 670 US gallons (2,500 litres) of purified water injected into the engines over the course of three minutes. How did it work ? The water was injected into the inlet and the diffuser case in front of the combustion case of the J57. The water would thus cool the air entering the engine in order to increase its density; it also reduced the turbine gas temperature, which is a primary limitation on many jet engines. This allowed the use of more fuel for proper combustion and created more thrust for short periods of time. Oldtimers at Istres remember well the pandemonial roar a J57-powered C-135F made of take-off ! However these jet engines from the fifties were at some point too noisy and did not produce enough power to propel in the air a fully loaded Stratotanker in hot regions of the world.

Therefore a major modification programme retrofitted as of 1986 about 500 aircraft with new CFM International CFM56 (military designation: F108) high-bypass turbofan engines produced by General Electric and Snecma. The CFM56 engine produces approximately 22,500 lbf (100 kN) of thrust, nearly a 100% increase compared to the original J-57 engine. The modified tanker, designated KC-135R (modified KC-135A or E) or KC-135T (modified KC-135Q), or C-135FR for France, can offload up to 50% more fuel (on a long-duration sortie), is 25% more fuel-efficient, and costs 25% less to operate than with the previous engines. It is also significantly quieter than the KC-135A, with noise levels at takeoff reduced from 126 to 99 decibels, thus universally accepted by commercial airports.

The KC-135R/C-135FR’s operational range is 60% greater than initial models for comparable fuel offloads, providing a wider range of basing options, however the Stratotanker is now reaching the retirement age even if a few reached the second-hand market in the meantime in Singapore and Turkey, and that’s the reason why it is being gradually replaced worldwide by the Airbus A330 MRTT  — chosen yet by almost a dozen different air forces with further propects mulling along for more — or the new and smaller Boeing KC-46A Pegasus selected so far only by the USAF, and after a heavily biased contest against the… Airbus A330 MRTT/KC-330/Northrop KC-45, thanks to the powerful “Buy American only lobby” in Washington. 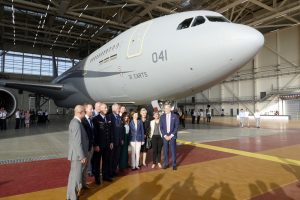 Moving ahead with the “Phénix“

If the lights are far from being out yet for the veteran French Air Force Stratotanker fleet —with the retirement of the first Boeing not planned before the end of 2019 — the advent of the Phénix in Istres is a first sign of the coming of a new era, quite physically obvious in the air base landscape with the erection of new massive and modern buildings entirely devoted to the support of the new Airbus multirole transport and tanker aircraft. The latest French military procurent law has decided on a future fleet of 12 Rolls Royce Trent 700-powered A330 MRTTs for GRV 2/91, however Mrs Parly has stressed during the October 19th reception ceremony at Istres, that her strongest will is to see this 12-strong fleet upreach in total 15 A330 MRTTs after 2025. The three additional aircraft certainly based on the latest A330-200neo commercial airframes now about to be delivered by Airbus in Toulouse. Let’s just mention here, en passant, that as of today some 1,500 A330s have been produced for dozens of airlines around the world since 1994 and that the A330 is nowadays internationally reckoned as one of the most reliable « wide body » in use.

Starting in 2020 and until the end of 2023, GRV 2/91 “Bretagne” should receive from 2 to 3 A330 MRTTs per year directly from the Airbus Conversion Centre in Spain by which time France’s Phénix-fleet will be the most important in NATO, along with the 14 similar Voyager KC2/KC3 of Britain’s Royal Air Force (owned by the private AirTanker holding). As for the veteran French C-135FR/KC-135RGs, 2024 will adamantly mean the end of the road, and disposal for scrap. It is however hoped two will be saved at Le Musée de l’Air et de l’Espace at Le Bourget — a testimony of General de Gaulle’s grandeur — and one as a gate guardian in Istres-Le Tubé, especially as BA125 is due to become by 2025 France’s largest military aviation and transport hub.