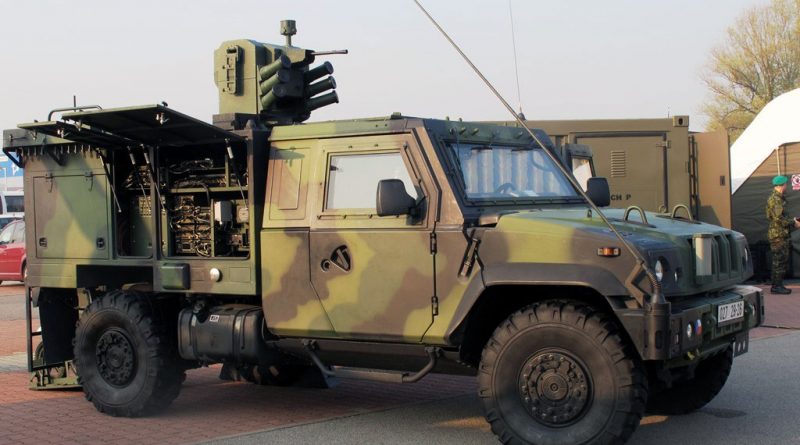 To adapt its forces to the recently published operational concepts and to its participation in NATO the Czech Army has not only to renew its combat vehicle (see article) but also its combat support systems.

Col. Pavel Lipka, Director Development of Land Forces Department, Force Development Division of the Czech Ministry of Defence, briefed the floor of the Future Forces Forum also on the programmes that will allow combat support units to become NATO interoperable and to raise their capacities.

The Land Forces order of battle contains the 13th Artillery Regiment, with its two battalions, 131st and 132nd, both equipped with the DANA 152 mm wheeled SP howitzer and with one Surveillance, Target Acquisition, Reconnaissance battery. The latter is equipped with artillery observation vehicles based on BMP-1 and BMP-2 tracked platforms and on Iveco LMV 4×4 wheeled platforms. All current systems should be fitted with a new fire control system from 2019, which will allow automating target handover and will be NATO compatible. However the main interoperability gap remains the calibre; following the cancellation of the Dana upgrade programme in late 2017, the Czech Land Forces are seeking a replacement in the form of a wheeled SP 155/52 mm system, ensuring a range of over 40 km and the Multiple Rounds Simultaneous Impact capability. It should have an automatic or at least semi-automatic loading system allowing a 5-6 rounds per minute rate of fire. Fitted with a state-of-the-art FCS, the Czech Land Forces are looking with interest at ASCA (Artillery Systems Cooperation Activities), a software-based program used to digitally communicate real-time, linking field artillery and command and control systems. While no indication was given about possible candidates, what was made clear is that the system will be installed on a Tatra 8×8 chassis that ensures good cross-country mobility.

In the exhibition area only one potential candidate showed up, BAE Systems, with a model of its Archer on a Tatra chassis; other candidates might be found in France, Nexter Caesar having been already integrated on a modified Tatra T-815 chassis, the system having been acquired by Denmark, in Germany, with KMW’s AGM (Artillery Gun Module), and in Israel, with Elbit Systems’ Athos. The number of systems to be acquired should be 52, which means three batteries of eight guns each plus spares. Artillery units will also receive Nexter’s 6×6 Titus armoured vehicle, which will be fitted in two configurations, battery command post and battalion/regiment command post, both fitted with the artillery FCS and signal components adequate to the level of command. The choice of the gun system should be at relatively short term, the estimated date of procurement being 2020-22, while the Titus should become available in the 2020-26 timeframe.

Remaining in the indirect fire capabilities, the Czech Land Forces are looking for a new 120 mm SP mortar system with ballistic protection and cross country mobility allowing it to follow mechanised units in action. The FCS will be the same adopted for artillery, the preference being for an autonomous turret to be installed on a wheeled chassis. This system should enter service between 2023 and 2025 and will replace the current PRAM S Type 85 tracked system in the 7th Mechanised Brigade while will also be deployed by the 4th Mechanised Brigade, adding inherent indirect firepower to its mechanised battalions. Overall 62 vehicles should be acquired.

Although not only related to artillery, the acquisition of Nexter’s Titus 6×6, prime contractor being Eldis Pardubice, will impact indirect fire capabilities, as 20 of the 62 Titus under contract will be fitted as Fire Support Coordination Element vehicles. As for the remaining 42, 6 should be fitted as Armoured Command Post Vehicle and 36 as Armoured Communications Vehicle, deliveries being foreseen between 2020 and 2026.

The 15th Engineer Regiment is due to receive two new bridging systems from 2021 on; one will be a scissor bridge or telescopic system replacing the AM-50 bridgelayers currently in service, capable to support MLC 70 loads and to allow crossing of a span of at least 12 meters, while the second will be a pontoon bridge set replacing the current PMS, to be used to generate either a bridge or floating pontoons, carrying loads up to MLC80. A bridge length of at least 150 meters is required. Deliveries should be completed within 2023-24. In the same timeframe the regiment’s EOD teams should receive a new MRAP-type vehicle capable to be equipped with mine rollers, investigating arms and UAVs. The required anti-mine protection is Level 3B.

As for the 31st NBC Regiment, this will receive a dedicated version of the Iveco LMV to replace the Soviet-era BRDM-2RCH. To this end the Czech MoD signed a contract for 80 new vehicles, that will come in two variants: S-LOV-CBRN and LOV-CBRN II. Forty of each type will be produced, sensors, equipment and integration being provided by VOP CZ and VVÚ (Vojenský výzkumný ústav, Military Research Institute). Beside the capability of detecting and sampling military CBRN agents, it will also be capable to cope with industrial toxic agents. A trailer known as P-LOV-CBRN has also been developed by VOP, which allows increasing the vehicle capabilities or can be used as a stand-alone sensor unit.

At the rear the LOV-CBRN II is fitted with a device allowing deploying the Orpheus-AC2 UGV developed by the Laboratory of Telepresence and Robotics of the Brno University of Technology. The deployment  of such vehicles is forecasted in 2021-22.