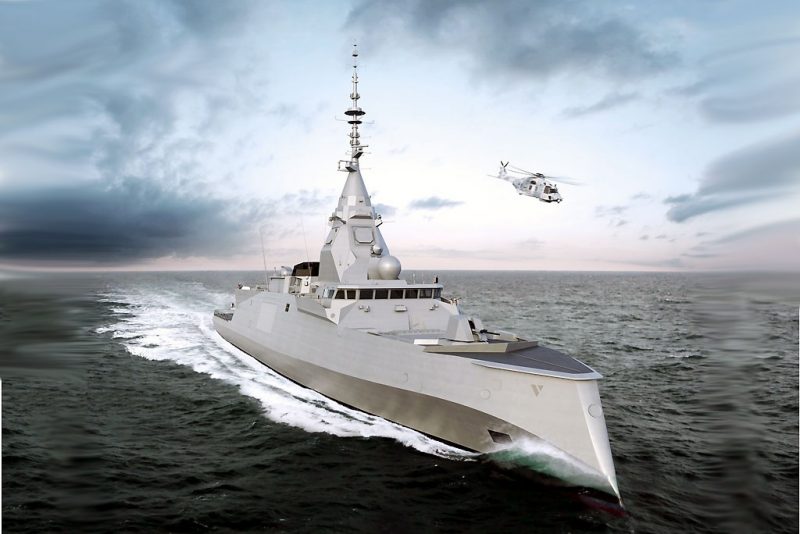 Visiting Lorient to inaugurate the platform where Naval Group, Les Chantiers de l’Atlantique and TechnicAtome will jointly conduct their studies for the new generation aircraft carrier, PA-NG (Porte Avions-Nouvelle Génération), integrating their development teams since the preliminary design phase, Mrs. Florence Parly, the French Minister of the Armed Forces, announced an acceleration in the deliveries of the second-and third of class of the Frégates de Défense et d’Intervention (FDI)

The FDI has a 4,500 tons displacement, her complement is of 125 sailors on board, can carry a helicopter and a drone, and is the first vessel of the Marine Nationale to be designed as digital from scrap.

The two FDIs will thus be delivered to the Marine Nationale in 2025. The Délégation Générale de l’Armement DGA) issued a press release announcing the signature of the contract immediately after the Ministry speech. Click HERE to read it.

Back to the aircraft carrier issue, the French Minister of the Armed Forces underlined the importance of the step made by the two major actors of the future carrier programme, Naval group and Chantiers de l’Atlantique. “The industrial and technological challenges are considerable. To be up to these challenges and to keep the programme schedule, it is absolutely necessary to come together and join all the forces. This is in particular why, today, the two main architects and designers of the new generation aircraft carrier, Naval Group and Chantiers de l’Atlantique, have teamed creating a joint venture to carry out this project. with more integration between the teams since the pre-design phase and therefore with greater efficiency.”

She also underline the decisions that will have to be taken in preparation for the construction of the new vessel in terms of aviation assets, nuclear propulsion and connectivity.

According to plan in 2025 the design of the PA-NG will be completed and construction will start. “You know better than anyone that building an aircraft carrier is a ‘long time’ adventure,” Mr. Parly said, adding that there is still a long way to go until 2038, when the new carriers will be commissioned. After this summary pre-project phase that we have started, will come that of the detailed design, then the launch into production from 2025. The first sea trials will only take place 11 years later, in 2036. And I know that we can count on you. Likewise, you can count on the state. The state will keep its commitments.” Mrs. Parly said.

The DGA announced the signature of the pre-development contract for the PA-NG, which was in fact signed on March 19th. Click HERE to read it.