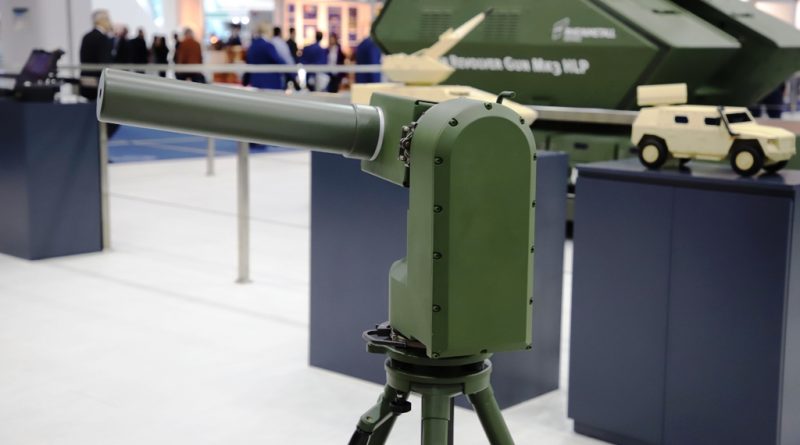 “For the first time we have on our stand all the four elements of our SHORAD/VSHORAD system on our stand”, Fabian Ochsner, CEO Rheinmetall Air Defence, tells EDR On-Line on the Rheinmetall stand at IDEX. The German Group through its divisions and controlled companies is able to deploy a whole set of C4I solutions, sensors and effectors to counter threats coming from the third dimension, including RAM (Rocket, Artillery, Mortar) and small drones.  Rheinmetall can integrate assets such as Skyshield or Skyguard fire units, guided missile launchers or even high-energy laser (HEL) effectors into the system. 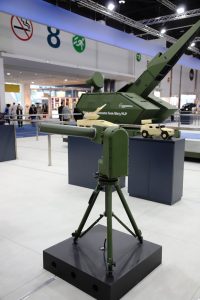 The last addition to the panoplia of systems available in the Rheinmetall’s cataogue is the C-UAS jammer, which is shown for the first time on a defence exhibition. The system was demonstrated a few weeks ago in Germany, and is operating in the frequencies up to 8 GHz, Dr.-Ing. Markus Jung, Head of Directed Energy, Technologie & Innovation, tells EDR On-Line. It can work on 3 bands, Upper and Lower Communications and Global Navigation Systems, the three circular polarised spiral antennas being contained all together in the system cylinder. The jammer can operate o 8 channels for each band, a standard 19-inch rack box containing the digital programmable master oscillators and the amplifiers, one per channel. A more compact version for tracked vehicles is being currently developed.

No exact details were provided about the antenna beam angle, but EDR On-Line understood it should be around 10°. Not only frequencies can be tuned to optimise the effect, also power can be trimmed, as jamming GNS signals requires less power than disturbing communications, therefore the amplifiers power level can be adjusted in order to optimise power consumption. As for ranges, used from a static position the Rheinmetall system should be able to start having detrimental effects on the drones at less than 2 km. It is to note that such a system can be effective also against swarm attacks: at least for now, drones operating in swarms need to communicate to each other and to know their precise position, thus the slightest disturbance to one of the signals may well disrupt the formation with possible lethal effects on many of the incoming drones. Rheinmetall is also considering High Power Microwaves (HPM) as another method to neutralise UAVs. 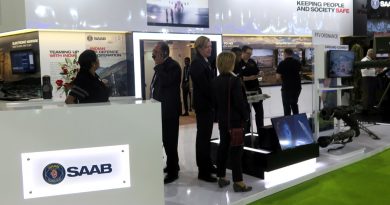