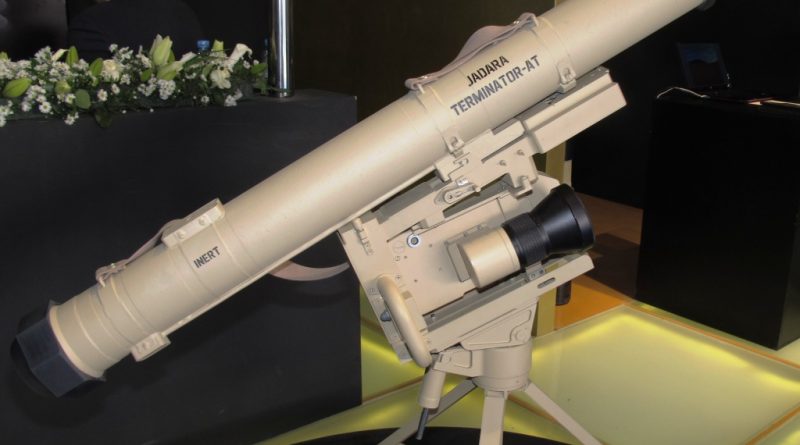 Jadara, the Jordanian national company specialised in the manufacturing of rocket propelled grenade launchers, took the opportunity of SOFEX for exhibiting for the first time in public its J-Terminator antitank guided missile. In fact, the existence of the missile was made public last 30 April, when HM the King Abdullah II visited the company premises and was given a briefing on the new weapon system. “We started to work on the J-Terminator in 2017, and we are now in the very final stage of development,” Eng. Khaled Jafar, the company vice-Chairman, tells EDR Magazine, “and following tests which are currently underway, we expect to be ready for production by year end.” The J-Terminator is a SACLOS laser beam-riding manportable missile made of a launch unit which features a 4.3 kg launching unit, a 7.2 kg guidance unit (PUT-1) and a 6.3 kg tripod. The guidance unit is fitted with an uncooled thermal sensor that gives the system a day/night capability. 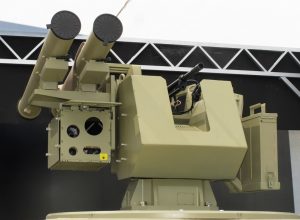 Two types of missile were developed in order to answer different requirements, one being a typical antitank projectile while the second is used against buildings and soft targets. Their dimensions are identical, the launch tube being 1.18 meters long with a 113 mm diameter, the missile itself having a diameter of 107 mm. The AT missile is fitted with a dual shaped charge warhead “capable to defeat 550 mm RHA behind ERA,” and weighs 15.9 kg. The HE round is slightly lighter, 15.4 kg, and although designed for non-armoured targets it maintains a penetration capability of over 50 mm RHA, well sufficient to defeat light to medium armoured vehicles. The effective range is between 100 and 2,500 meters, time of flight at maximum distance being 13 seconds. Born in hot climates, the J-Terminator missile can be operated between +60°C and -40°C, and has a 10 years operational life. The J-Terminator has already been integrated in a turret holding two missiles and one 12.7 mm machine gun which was visible in the company outdoor stand. 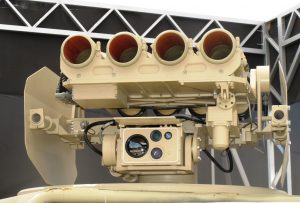 However surprises are not finished at Jadara. “In early 2018 we started developing a new system,” Mr. Jafar tells EDR, “in the form of a new RPG that in the end will replace our current RPG-32 Nashshab.” He underlines that the aim is to increase range, diameter and thus penetration capability. “We hope the development will be quick, as we are producing in-house most of the components,” he adds, underlining that he hopes to really reduce as much as possible the time to market.

For the time being the RGP-32 Nashshab remains the core business of Jadara, which has an average production capacity of 50,000 pieces per year. No data were provided on the number of systems produced so far, however beside the national customer many foreign armies acquired the RPG-32.

Currently the Jadara Equipment and Defence Systems Company employs 124 Jordanian engineers and technicians, however the company is expanding. “We are building a new facility where we will produce warheads, while another facility dedicated to our Research and Development Department is planned and we are now negotiating to start the construction,” Mr. Jafar concludes.