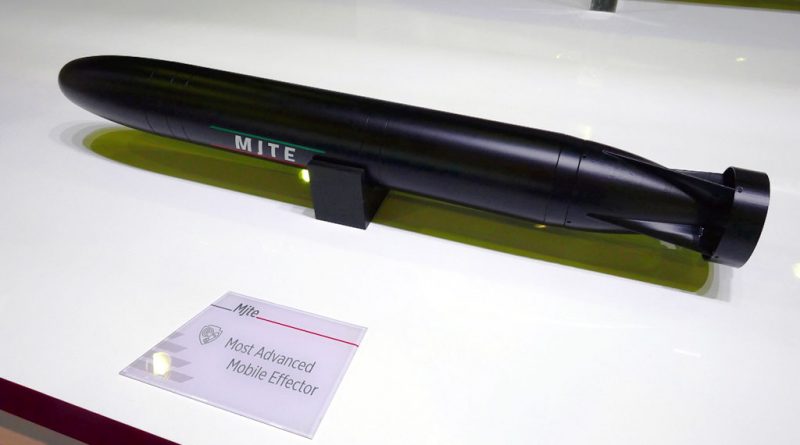 According to Leonardo the qualification of its new generation anti-torpedo countermeasure called MJTE (Mobile Jammer Target Emulator) will be completed in 2021. The MJTE is a key element of the new anti-torpedo suite including the Black Snake towed array sonar, a reaction management sub-system (RMS) and the dedicated trainable 8 or 12 barrels decoy launching subsystem or the new multi-purpose and multi-spectral OTO Decoy Launching System (ODLS) 20.

The Black Snake is a towed array sonar operating in “passive” mode, specially designed for torpedo detection, which features a patented innovative device that allows solving the left/right ambiguity in a very short time without using hydrophones-triplets or asking the towing ship to execute maneuver to induce movements on the towed array. Together with a patented highly innovative beamforming algorithm, it allows achieving outstanding performance in terms of detection distances and bearing measurement accuracy even against modern very silent torpedoes. The system provides a full panoramic acoustic coverage around the ship, ensuring permanent surveillance also during the escape maneuver, enabling a second reaction to torpedo re-attack. According to the company, the Black Snake is the only passive sonar on the market able to achieve a detection range higher than 6 km, despite its compact dimensions, and to be operated up to Sea State 5. The application of the over-mentioned innovations together with Leonardo long experience in anti-submarine and anti-torpedo warfare resulted in a particular design with limited dimensions of the towed body and reduced time to obtain torpedo-classification information. The passive array sonar has a 55 mm diameter, is 4 meters long, and is towed by means of an electromechanical cable of around 16 mm diameter and up to 600 meters long. It includes the stern stabilizing system, a vibration insulation module to prevent vibration to be transmitted to the towed array, and an electronic sensor module to convert the acoustic into electronic digital signal to be passed to the ship via fiber optic.

The Black Snake is directly interfaced with the reaction management sub-system  to carry out the optimized reaction with a mix of escape maneuvers and the launch of dedicated decoys. The Black Snake has been acquired by the Italian Navy to defend the new Trieste-class LHD and although both Fincantieri and Leonardo haven’t disclosed or commented, the system is reported to have been selected to equip the new multi-purpose corvettes and the amphibious and command and control ship for the Qatar Emiri Naval Forces.

Based on Italian Navy requirements and procurement programme, Leonardo developed the new generation MJTE anti-torpedo decoy combining in a single body the capability of current stationary jammers and mobile target emulators (MTE). As an evolution of the MTE, the MJTE allows reducing the number of decoys in a salvo from 5 to 2-3, nearly doubling the number of defensive actions. The MJTE body has a 127 mm diameter and is 1.3 meters long; it weighs 21 kg and includes a transmitter front section, battery, electronics and rear motor section with a towed receiver. The MJTE was able to demonstrate an escaping probability by the protected platform higher than 70%, this figure being based on sea trials and on simulated engagements, exploiting customer-provided scenarios. The MJTE can also be launched at a shorter distance compared to current systems. It also comes in an exercise configuration, the MJTE decoy buoying at the end of the mission allowing recovery.

The new decoy can be launched from both current dedicated trainable 8 o 12 pneumatic-actuated barrels launch subsystems and the Euroslat 12-barrel anti-torpedo launch system, two such modules being installed on board FREMM frigates and Horizon destroyers. The MJTE can also be used in any type of anti-air warfare decoy launcher by using a pyrotechnical canister, including the new multi-purpose and multi-spectral ODLS 20 subsystems. The ODLS 20 is an evolution of the current SCLAR-H which differs for a trainable launcher with 20 mortar stations capable to launch the full range of 130 mm CounterMeasures (CM), rockets or mortars, for both AAW and ASW duties, including self-propelled air-defence, anti-torpedo decoys and obscuration ammunitions. The OLDS 20 has a ± 135° training and a 0°-55° elevation sectors that allow optimizing the CM entry point into water.

Leonardo has already integrated Chemring’s CMs (e.g. IR 130 PIRATE), Rheinmetall’s CMs (e.g. Bullfighter DM39) and the new MJTE ASW CM equipped with a dedicated pyrotechnic canister into its launcher, which has 8 out of 20 barrels dedicated to the MJTE. The ODLS 20 was developed for Italian Navy’s new ships including the PPA, LHD and LSS (fitted-for) platforms as well as the latest delivered FREMM frigates. Leonardo also developed a lightweight launcher for the MJTE and current C310 decoys which can be grouped in two separate three-barrel groups to offer the best protection on smaller naval platforms. 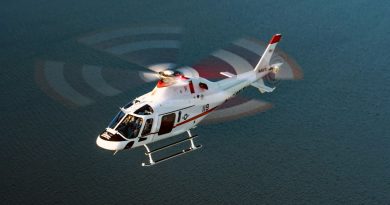 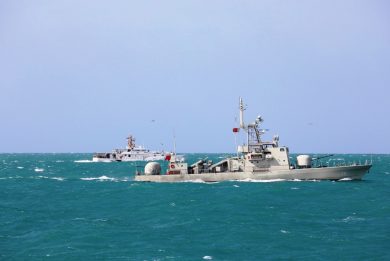